5 Ways to Stop Touching or Picking Your Skin

I would like to stop the mindless and automatic habit I have of touching and feeling my skin whenever I get a spot. Or touching it if I’m anxious and think I’m going to get spots. Or touching it any ol time of day for no good reason.

Maybe you’re not a skin toucher. Maybe you’re a skin picker. Or a looks-too-much-in-the-mirror kind of person.

I’m a former acne popper/picker, but still a skin toucher and a bit of alookie-loo. The whole mirror thing will be my next project…. but the touching personally bothers me more, so I’m going to focus on that for now.

Anyway, watch this video to find out why skin touching, poking, and looking are not good ideas and why I want to quit:

Okay so here are my tips on how to quit doing these things and what I’m going to try. I’ll be honest, since I’ve made this video I’ve been failing miserably at stopping (although I haven’t been trying very hard) – it’s just so damn automatic. I just do it before I even have a chance to think the thought.

And that’s the problem – 95% of the things that we do are automatic. We don’t have to think about them. Which, really, frees up a lot of brain power for us, especially if these automatic actions are healthy habits and positive thoughts. But it’s very easy for bad habits and thoughts to also get ingrained into our autopilot mode.

Okay, right, so… back to the tips:

If you tell everyone and make yourself publicly accountable, you’re way more likely to follow through than if you are only accountable to yourself. That’s why I told all of you! So don’t let me get away with not stopping this!

2. Scare Yourself Into Stopping

I’m putting this near the top of the list because it’s honestly the sole reason I stopped picking my skin… I read the website Stop Picking On Me and the way they describe the horrid destruction and absolute mutilation you are doing to your skin every time you pick and squeeze it (which, by the way, warps your pores and makes them more likely to be clogged again the future, not to mention can create lasting scarring)…

Well anyway, it was tough to quit, but I basically just visualized this horrid massacre of my skin cells and all the extra acne that will come back in that one spot, and… yeah. That was it. The idea of squeezing my skin absolutely horrifies me now. I can’t believe I never realized how much worse it made my skin look. There are the rare times that I will occasionally still pop a pimple (for old time’s sake?), and I almost always immediately regret it. I did it today, in fact, and I’m still annoyed. It’s turned me off popping anything for a while, that’s for sure!

So anyway… somehow I can’t seem to get myself to believing skin touching is nearly as bad, but I’m going to try to use the same strategy with this and see if it works. I will visualize the bacteria on my hands getting pushed in there, festering, and creating a giant volcano of a pimple. Ugh.

If you feel the urge to pick or touch or look and it comes over you strongly, take a really deep breath into your belly and switch to focusing as hard as you can on a positive word or phrase like love or peace or joy. If your mind wanders, bring it back and repeat the phrase to yourself. This will remind you consciously how you would like to act in this situation – ie. resisting the urge and doing something else. It’s much better to focus on a new habit and positive thoughts than it is to dwell and punish yourself when you do give in or forget.

4. Use Visualization to Rehearse Life Without the Habit

Every morning when you wake up, take a few minutes and let your imagination go in detail through the day to come. Think of all the times that you’d spend performing your bad habit, but in your visualization, show yourself resisting and performing a new healthier habit (ie. just ignoring your skin, doing something else, or focusing on your happy phrase). Soon your brain will act in accordance because it doesn’t know the difference between reality and mental rehearsal.

5. Look at the Emotional Reasons Behind the Habit

Okay… well this is the hard one but probably the most important. I know we all get some kind of sadistic pleasure out of picking/touching/looking…. but why? What need are we filling? And can we fill that need with our replacement habit?

I actually think this may have been a reason that I was able to so easily quit popping and squeezing… I only really ever did it because I figured getting the pus out of spots would make them go away sooner, and thus make me look better. Obviously touching my face has no perceived value as far as making myself look better goes… I think it goes much deeper. I think it’s probably a validation of my fear. I fear that my bad acne will come back, so I go looking for it – I go looking for something to satisfy it.

Hmm. Well, the silly thing is that I’m too addicted to working on my blog to stop and take the time to actually figure out how to work through the fear I’ve been carrying around, which has been coming out to haunt me a lot lately. Sigh. Sometimes it’s hard to take your own advice.

Do you have bad acne habits? Who wants to quit them with me for moral support? 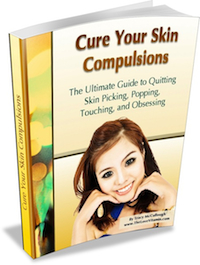 UPDATE: Since writing this post (and unfortunately not actually being able to quit using said techniques), I have discovered the method that they use to treat skin picking in clinical psychology (the thing that finally worked for me).

I have written about it in my new ebook “Cure Your Skin Compulsions – The Ultimate Guide to Quitting Skin Picking, Popping, Touching, and Obsessing”. If you are struggling with skin picking or other compulsive skin behaviours and would like to look and feel better, check it out here.

How to Get Your Skin Back on Track After the Holidays (Hint: Don’t Fight the Breakout)

The past month of late-night parties and gluttonous feasts has just come to an end — bring it on, 2018! Happy New Year, you all!