Are You Unknowingly Causing Your Own Acne?

Today is an optimistic guest post from Love Vitamin reader, Nicole, who discovered through the help of my blog and my successful “caveman regimen” experiment that she was causing her own acne with the products she was using.

She beautifully describes how the (seemingly) simple act of dumping her beauty products in the bin cleared her skin and set her free. 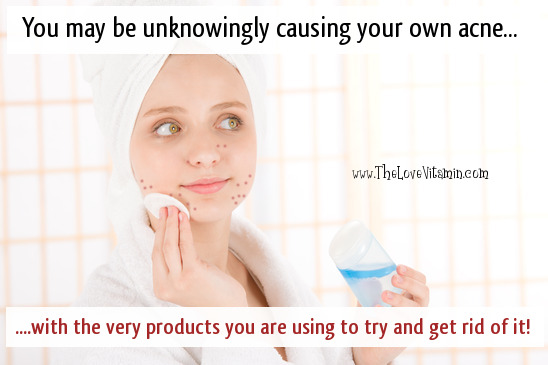 It is a question I dared not ask myself for too long a time. Am I inadvertently causing my own acne? It was, after all, something happening to me (wasn’t it?) a cruel and senseless affliction I played no part in, except to carry it around shamefully on my once flawless face.

It shouldn’t be shameful. I know. Yet I walked around hanging my head in as much shame as if I was wandering around public in my underwear. I didn’t want people to look at me. I became adept at speaking to people without looking them in the eye.

Yet let it be clear that there is nothing shameful about acne. The myths surrounding un-cleanliness and excessive chocolate consumption have been debunked again and again. No. We are not dirty, greedy people. We are people with a health imbalance that is no more shameful than any other. Yet many of us treat ourselves as though we have the plague.

I was emotionally plagued. Acne has a clever knack of slowly taking over your whole life, if you let it of course. I let it, time and time again.

My mission in life became a quest to banish it completely. And forever. I decided to do whatever it takes. So I waged war on my own face, a war that was bloody and relentless. If this dermatologist couldn’t help me, I would find another one. If this topical treatment didn’t work, there were shelves and shelves more. Medication? Why not? The doctors and pharmaceutical industry must know what they are talking about after all.

As it turns out, they were unconsciously colluding with my efforts to make the whole affair a heck of a lot worse.

The Discovery of Acne Mechanica

You may not have heard of acne mechanica. I hadn’t either. Yet stumbling across a post about it was like a million tiny lanterns flickering in the dank caves of my despair.

Acne mechanica is acne caused by the occlusion of pores, often by clothing, cosmetics and skin care products themselves. Scientists in 1975 even caused acne lesions by putting band aids over sections of people’s faces. Why hadn’t I known about this? I couldn’t believe it.

My war against acne had mainly comprised of assailing it with this cream or that and covering it up obsessively with concealer at every corner. I began to wonder if I had, indeed been occluding my pores and inviting the dreaded pimples to materalise.

I thought back to when it had all began. I had visited a dermatologist for some tiny, strange looking bumps all over my forehead. In retrospect, I now believe they were simply millia, caused by the heat of a recent week spent in Greece. They would probably have gone away happily all on their own. Instead, the dermatologist offered me lazer treatment (which I thankfully declined) and some rather strong gel, which she recommended putting all over my face each night for three months. Within less than a month, I had developed a rather virulent case of acne.

I kick myself now for not realising sooner. Yet many of us have been led to believe that the ‘experts’ are to be trusted and that we shouldn’t question their methods. Granted, my experience was a particularly and perhaps uncharacteristically bad one and there are many truly spectacular experts all over the world. It would also be foolhardy to suggest that all acne has such origins. Correcting nutritional balances and balancing hormones works wonders for many people. Hormones, deficiencies and underlying allergies or medical issues simply weren’t the cause of my own pain.

I would implore you, particularly if you are suffering from a sudden bout of adult acne as I was, to consider that what you are using to combat your acne may simply be perpetuating the cycle. I invite you to take the four week challenge (yes, it is terrifying) to forgo all your lotions, potions and concealers and allow your irritated skin to heal.

The skin is our largest organ and it needs to breathe. The pores are there for a reason. Occluding them truly invites acne and other infections to throw a party.

The Immense Courage to Let Go of the Products

Going ‘naked’ requires a great deal of courage and generous lashings of trust. It you’re anything like me, you will throw your concealer into the bin and get it out a number of times before letting the garbage truck finally take it unceremoniously away. You may even walk longingly down the skincare aisle at every available shop and opportunity, wondering if you should just try this one new facial wash, just once. Water alone, you reason, surely can’t clear those monsters on your face, can it? Yet, if you are brave and stick to your guns, you might just find that it can.

So, what is the science? The outer protective layer of our skin, known as the acid mantle, is designed to keep opportunistic bacteria out of our unsuspecting skin cells. Chemicals applied to the skin can remove this mantle, making it highly susceptible to infection. Even natural products can strip our skin of this vital protection. Couple this with occlusion and subsequent blocking of the pores by leaving chemicals, such as concealer, on the skin and you have clear-skin suicide.

It will take you a good couple of months to rebuild your acid mantle. Where acne is concerned, it would seem, patience really is the most prized of virtues, Yet, only a month after throwing all of my beloved products away, my acne was almost gone.

Another month later, all I had to show for my battle were a few hyper-pigmentation scars and a shaken ego. I can’t even begin to describe to you the joy I now feel when I look into the mirror and see the image staring back at me. I feel like myself again, as though I lost my face for a year and now have it back.

I could never have imagined that acne would take the bottom out of my self-esteem so virulently and send me spiralling so haplessly into so giddy a despair. I now feel like I have come back to myself and all because I threw a few chemicals into the bin.

Muster the amazing amount of courage you have within your heart and allow your miraculous body a little time to heal itself. I can think of only one thing you have to lose.

Check out Nicole’s blog Wholeness Pilgrim, which is a place for souls on a journey toward wholeness.