One Girl’s Confession to the World about Acne Dysmorphia

I received an email the other day from a reader named Maria and she showed me a note that she had written for her facebook page. I think she is very brave for having the courage to share this extremely vulnerable side of herself with the world, so I asked if I could share it with you!

You may be able to relate to something from Maria’s story about dealing with the miserable, psychological effects of acne while attempting to find her footing on the road to recovery. 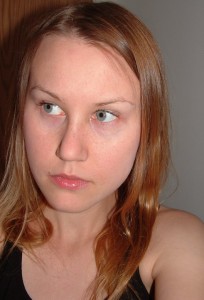 This is hard for me to write.

Writing this means I’m admitting to my flaw. It’s sort of a double flaw, or a triple flaw.

I have come to realize that I have Acne Dysmorphia. I also have Age Dysmorphia to a lesser extent. They sort of go back and forth from one to the other. If my acne gets better, my Age Dysmorphia gets worse. I always need something negative to focus on, but let’s hope that in writing this for all of you, I will feel more accepting of myself.

My acne has never been severe. I started to get it at about 14. I’d say at that point it was moderate. Since then it’s been light. Not long ago it got worse because I started a new herb and I guess my body was detoxing.

It’s been getting better since I’ve been more conscious of what food and drink effects my body, but nonetheless, the negative viewpoint of my face lurks in my mind like a dark cloud. I catch myself thinking these negative thoughts sometimes, but most of the time it’s just a general anxiety. My consciousness is pushing this uneasy thought further and further back.

Even now I want to assure you that my acne is not severe. It’s actually quite light at this point. I think I wouldn’t be able to write this if it wasn’t. I think if I didn’t know a solution for my problem, that I wouldn’t. The worst part is that I would become fed up with not seeing immediate results and go back to the drinks and foods that made my face break out in the first place. It’s interesting, normally when I used to be stressed, I would turn to alcohol, caffeine, junk food, but in this case, if I do that, the overall situation will get worse. It’s been a challenge, actually kind of cool at times because it’s neat to see how far I can push myself.

I used to look at my face in the mirror about 20 times a day — no joke. I looked at spots, and I looked at wrinkles. I have a few premature wrinkles on my forehead. I made my own “light” benzoyl peroxide solution for my face a few years ago. I thought, if Proactiv knows how to do it than I can make my own lotion with a small percentage of benzoyl peroxide. Well, I must have messed up the percentage because I dried out my skin. I saw a small wrinkle. I went out and bought retinol cream. I put lots of it on my forehead. It dried out my skin even more and gave me more wrinkles! It probably changed my DNA at a deep level. Retinol’s good at that. Anyway, I guess if you put on a lot of it, it can have adverse side effects. If you put on a bit, apparently it actually helps wrinkles at a deep level.

So that’s my story, give or take a few details from high school, but I don’t want to change my facial features anymore with plastic surgery — that was purely a high school thing.

I guess the monster is the constant obsession. Maybe I should see it as less of a monster and more of an acquaintance, a disgruntled neighbour, or maybe a neighbour that I can become OK with.

I feel a lot better already by writing this. I know that when I ate poorly, at a few points even recently, I didn’t want to leave the house and thought about suicide. I didn’t consider doing anything, but I thought, if life doesn’t get better than this, then there’s no point in living, so I have to make life better than what I’m feeling right now.

Again, I’m not seriously considering it at this point, but I sure did in high school. Acne Dysmorphia is serious. By the way, it might have something to do with my Asperger Syndrome, which leads me to have the tendency to narrow in on details on subjects. I just thought I would throw that in there.

Thank you for reading! I hope this has helped you in some way, and if it hasn’t, then I’m glad that I got this off my chest!