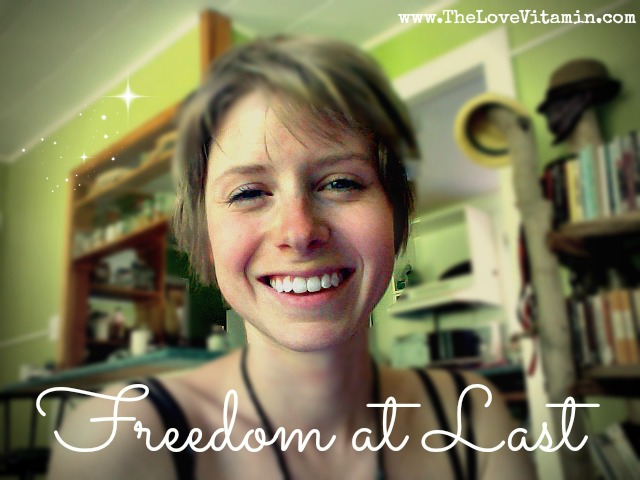 I started eating better and looking after my health several years ago because, well, as you probably know, I had terrible acne, and I wanted to get rid of it.

And so I improved my lifestyle dramatically, and it got rid of nearly all of my acne. I attributed most of that success to my diet (whether that’s true or not, I’ll never know, but that’s what I thought), and so I was rather strict with my food. VERY strict in the beginning, and less strict as time went on.

Why was I so strict? Well I was terrified of the emotional pain of having acne again. So I attempted to control that anxiety by trying to control my food. As time went on, the memories of the pain faded, and so did my strictness.

So I still continued to feel a bit trapped by my need to tightly control my diet and lifestyle.

So even though my skin and health and eating habits were actually quite good, it wasn’t “perfect” (whatever that means). So I was still always looking for the next remedy, the next great diet, the next great this or that – the thing that would catapult my health and skin to the cosmos. The ultimate perfection.

And if I spent any time not being able to eat or live the way I wanted, I would push back against it, try to control the situation, and ultimately cause myself stress.

Long story short: I was primarily looking after my health because I was afraid.

Not reeeeally the greatest reason to care about your health, but is probably a big reason most of us get on the health train to begin with.

Anyway, it got to a point about a year ago where I was about to embark on the really intense, strict, two year long, digestion healing diet called the GAPS Diet. It’s so strict that I basically would not have had a life if I were to do it, but I was so excited about it because I thought it was my perfect saviour. I thought it would fix everything about me.

I felt like all I had to do was muscle my way through this two years of strictness and then I would never feel anxious again.

……. aaaand then I tried it, and I felt just AWFUL.

So I decided to quit.

And suddenly I felt this immense sense of relief. Like I was suddenly waking up and coming out of a fog. Oh. What was I just about to get myself into?

After that, I realized how sick I was of reading about nutrition and diets and health information on the internet. The more you read the more scared you get. The more you think you have to be trying this diet, or that diet, or this procedure, or that supplement. The more confused you get about who is right. The more you cut out of your diet on the basis of hearsay and speculation until you can’t eat anything.

And the more you read, the more you think your health sucks when… hey… maybe it’s not that bad? Maybe you just need to relax a little??

This was a turning point for me.

And then I just dropped it. I dropped everything. I stepped away from reading about nutrition. I decided that I was not going to fear any type of whole foods just because someone on the internet said that it was bad.

I realized that nobody really knows what they’re talking about, and you just have to listen to yourself and your own body.

I would eat what I wanted when I wanted.

Luckily I was already in the habit of eating whole foods, so I continued to eat whole foods, but I ate anything I wanted when I was with friends and family or away on vacation. I started eating cheese, gluten when it was offered, sugar, dessert. Whatever!

Sometimes I got scared, and if some pimples showed up, I’d still get a little panicky, but mostly it was a relief. A big relief.

My skin didn’t get any worse than when I was so strict and as I softened into this new way of life, I began to trust that it was okay and that it wouldn’t get any worse. Life became immensely easier. I had a lot of fun.

You know what, and once I got out of my own way and allow myself to relax and come into a place of calm, I actually discovered a supplement that has done amazing wonders for my skin and allowed it to stay more lovely than it’s ever been (Estroblock – friggin’ looovvvve it!).

And I’ve continued to eat a mostly whole foods diet, with some processed foods, cheese, and desserts thrown in. Sometimes if I eat too much of that stuff, I don’t feel that good, so I just naturally feel the urge to eat better again.

And I like it. It’s so SO much better in many, many regards. And my skin has been glorious. It’s been great to see that I can be lenient and still have great skin. It’s wonderful. And freeing.

However, I have noticed that over time, some very minor things have cropped back up.. Nothing very serious… it’s just mild yeast infections and little mild flare ups of eczema on my hand, both of which come and go throughout the month. Minor nuisances, really.

So I’m going to the naturopath, in fact I’m writing this as I’m waiting for my appointment. I think it’s just a candida thing. I’m going to get pick up some probiotics and antifungals and I’m also going to get checked to see if I have any food sensitivities. Mostly because I am curious – has my diet lenience resulted in an increase in food sensitivities compared to past tests?

The glorious difference between before and now is that I don’t feel panicky about my health, or the results of this test. I feel more naturally drawn to looking after me and keeping things on track because I love myself and want to feel good. The whole thing isn’t fearful anymore. It’s less borderline eating disorder due to a sadistic perfectionist tendency. It’s me projecting less meaning and emotion onto food and health.

You know…. all in all…. I feel like I’ve finally arrived at where I wanted to go on this acne journey.

I thought that getting rid of my acne would result in feeling free and free from anxiety. But when I became mostly free of acne, I was then being held hostage by my own fear and neurotic control issues in order to keep it away.

When I realized these control issues were keeping me in a little box I had built myself, I realized that I needed to let go of that before I would ever really be as free as I felt before bad acne made its way into my life.

I realized that a long time ago but it wasn’t that easy to get over those fears. But I kept at the process.

It’s been one heck of a journey, but I finally feel like I’ve arrived. Like I am finally free again. For real. It took me three whole years to do this, but I think I have finally arrived.

I feel like if I did start breaking out again for some reason, it would be okay. I wouldn’t like it, but I would be alright. Because I would be my own safety net against acne. I would know within myself that I could get rid of it and that I would survive and that I don’t have to panic. I would know that my achievements and my enjoyment of life and the light inside of me and all that is wonderful about me is infinitely more important than how I look.

I honestly wondered if I would ever get to this place. I hoped I would, but deep down, I was nervous that acne would be the ball and chain that physically and mentally haunted me for the rest of my life.

In fact, I actually feel like I’ve surpassed my expectations for freedom. Because I understand now having physical “flaws” that do not live up to impossible societal beauty standards does not make me less of a person or define who I am, so I feel more secure with myself than I ever have in my life.

The best part of this journey has been connecting with all of you and being able to share my thoughts and revelations and trials and tribulations while trying to heal myself and my heart. I feel like it has been immensely helpful to me to express these thoughts and get your feedback over the last few years.

Thank you so much Love Vitamin-ites…. I LOVE YOU!!! xoxox