How to Travel the World On a Budget 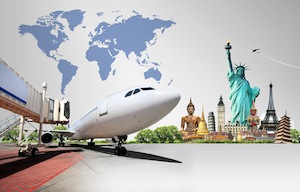 As I mentioned a couple months ago, Luke and I are about to head off on a three month adventure to India and Nepal. This Saturday, we will be on the plane to Delhi! So excited!

Every time I mentioned in the past how I’ve been on extended trips around the world, I get questions about it such as “How do you do that? Are you rich? Are your parents rich?”

Lol. No. I’m not rich (at least by Western standards), never was, and neither are my parents. And no, they did not pay for my trips.

If you are drawn to the idea and you are willing to do what it takes to make it a reality, long term travel is well within the grasp of many of us living in the developed world, not just the rich people.

Right now, millions of ordinary people are wandering the world with everything they need stuffed into backpacks on their backs…  for weeks, months, and sometimes even years.

So … How Can You Possibly Do That?

Yes travel does cost money (obviously), but it doesn’t have to be like that. People who travel the world for extended periods of time don’t travel in the same way. They:

How I Travelled Abroad on The Cheap

The first trip that I went on was when I was 18. I was crazy about travel. I could not WAIT to graduate high school so I could go and see the world.

At first I was going to go with my boyfriend at the time, but then I decided we weren’t meant to be together. But… I still wanted to travel. Except now I didn’t have a travel partner. So I went by myself.

I just knew if I had to wait for someone to go with me, I would probably never go. After all, its not always easy to find someone who has the exact same goals and aspirations for your trip as you do. Plus, they have to be as committed to saving money for the trip as you are… PLUS – you have to like them enough to spend a LOT of very intimate time with them.

I just knew it was not going to find anyone like that any time soon enough for impatient little me, and I wasn’t willing to let my dreams slip away.

So off I went by myself.

I got myself a working holiday visa for Australia (which meant I could stay for one year and work and travel there as I pleased). I stayed at cheap youth hostels which were jam packed full of other travellers. I got a job in a restaurant in Sydney. I traveled up the east coast via the Greyhound bus, and then hopped over to South East Asia for three months, where things are so cheap you can go months on a couple thousand dollars.

By then I had no more money, so I got a job in a pub in some completely random little farm town in Western Australia (600 peeps strong). Saved enough money to head to New Zealand for a couple weeks. Then to Brisbane to work for a little bit more. Then to Byron Bay where I lived in a tent for a month on the least amount of money I could get away with. And then I went home.

Once home, all I could think about was getting back on the road again. So I saved up some more money, and this time got a working holiday visa for Ireland. I flew to Europe, but instead of settling in Ireland, I somehow I found myself travelling around Eastern Europe, and working at a hostel in Budapest, Hungary, which extended my trip. It was also where I met my husband, Luke, who is Australian! To end the trip, Luke and I head to Morocco for three weeks, and then I went home again.

Even though I went alone on both of these trips, I was rarely ever actually alone. Everywhere I went, I met other travellers from all over the world who were doing the same thing; always friendly and open, willing to chat and spend time with you. In many instances, I ended up traveling with people I had met on the road.

Of course it was difficult at times. Long term travel is not always “vacation” where everything is easy and stress free. It’s more of an adventure, and you should know that going into it. There are highs and lows. And traveling alone, if you choose to do that, especially forces you to get out of your shell, draw on your own strength, and rely completely on yourself. It’s an amazing growth experience.

But anyway…. back to the monetary logistics.

How Much Did Your Trips Cost?

Me telling you how much your personal trip would cost is impossible. It depends on which area of the world you’re going to (how expensive it is), how long you’re going for, whether you’re a bottom of the barrel budget bootstrapper, or if you like a little more comfort.

Just as an example my year long trip to Australia, New Zealand, and South East Asia – honestly I’m not really sure how much the whole thing cost in total. But my pre trip expenses including flights, insurance, a backpack, visas, etc probably came to around $2500 (Canadian). And then I saved an additional $5000 for the trip. And then because I watched my money and worked about half the trip… those savings lasted me an entire year.

That might sound like a lot of money, but think about how far you could go on that if you were traveling like I described above (fancy hotels, restaurant meals etc). That’d last you about two weeks!! An entire year abroad on a starting point of five grand? That’s exceptional.

I’m not sure exactly how much my four month jaunt to Europe cost, but I think I saved up about the same amount (which would have gone five times farther had I gone to inexpensive Asia! Although you CAN travel for cheap in Europe if you’re determined enough… Luke spent six weeks of his Europe trip on less than ten dollars a day by hitchhiking, wild camping, and eating nothing but cold legumes out of cans!…. okay, that’s a bit too roughing it, even for me…)

How Can You Save For Travel? 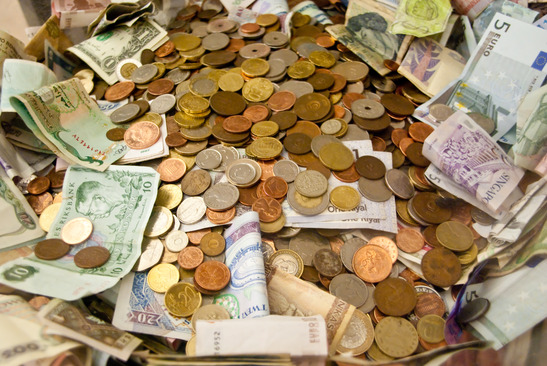 Well, first of all… you have to really want to travel, enough to make the sacrifices necessary to make it happen. Many people like the idea of travel, but when it comes down to it, they only really like it if they won a free trip or something.

Many people would rather spend their money on other things (or have to out of necessity). That’s toootally fine. Life is all about choices and priorities, and you can live your life and spend your money any way you choose.

Travel is one of my passions, so it’s not so hard to do what it takes to save for it. But if you aren’t passionate about it, or have other priorities or commitments, then that’s fine. I’m just trying to show you that in most cases it is not unobtainable, and it is definitely possible.

Anyway… people save money for travel by:

Also, if you are going away for a long time, it’s a good idea to uninsure your car, and move out of your living space (or rent out your home if you own one). That way you aren’t paying rent and housing bills at home. In many cases, depending on the part of the world you’re traveling to, you may even spend less per month than you would at home!

How do I personally save for my trips?

Back then I worked full time (at a pretty low paying job, mind you, so don’t think you have to have a fruitful job – although that never hurts!), lived with my parents (or found rent situations that were super cheap), and was extremely careful about not spending too much on things I didn’t really need.

I’m now in the unique situation in which my online business will be bringing in some money as I go, so that’s a first for me and pretty cool. Definitely helps. And we are going to one of the cheapest places in the world to travel, so that’s making our money go a lot further.

But I still had to save for this trip the same way as usual: by not buying things I didn’t need and living well below my means. That’s the key.

Aside from the things I’ve already mentioned on how to travel (ie, taking local transport, staying in inexpensive accomodation, etc), here are more details about how you can get overseas if you aren’t rolling in the big money.

Well, that’s my post about how to travel for a long time if your pockets are kinda shallow. You may have a lot of additional questions about the realities and logistics of travel, and I can’t blame you.That was hardly scraping the surface of all I could write about travel!

I used to say that I was going to write a whole ebook about it. In fact, I could probably create a whole blog and several ebooks about it! But, who knows when and if all that will really happen, so in the meantime, please check out a few of my favourite travel blogs and websites for more:

And please let me know if you liked this post and want me to write more about travel on The Love Vitamin, because I definitely will! And I will definitely do an update in a couple of months on how our travels are going and post some pics (follow me the Love Vitamin’s Facebook page for more).

Have you ever done the long term budget travel thing? What did you see and do? Was it a good experience?

[UPDATE] – I’ve started a little travel blog to regularly chronicle our adventures in India, please check it out if you are interested in following our travels!