Dating When You Have Acne 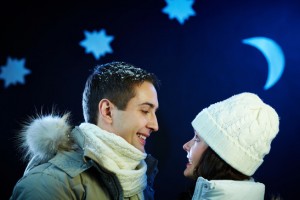 The most traumatizing thing about having acne is how unattractive it it makes us feel. So how do you go about the nerve wracking activity of dating people when you are positive that the other person must be repulsed by your skin?

I mean, going on dates, or starting a new relationship, is hard enough as it is. Throwing acne (or acne scars) in the mix can be terrifying. But in most cases, it really shouldn’t hold you back from trying to find love.

So to address the question of whether or not the opposite sex actually minds if you have acne. Well, the bad news is that I don’t think anyone actually really likes acne. To my knowledge, I don’t think there are any acne fetishists out there (although you never know). I’m pretty sure everyone would generally prefer if acne just didn’t exist.

But I think that in most cases, it’s really not as big a deal as we think it is. Because, in reality, a LOT of people have at least some acne. Seriously. Just look at people. People have blemishes. I know we always think that our skin is way worse just because it’s ours, but acne is a thing that happens to real people everywhere all the time.

Which means most of the time, if you have acne, but you happen to also have a lot of other amazing qualities that they find attractive, they just won’t care about your skin. In the end, people just aren’t holding out to date the model with perfect skin above all else. If they were, they’d get really lonely.

Plus, when you like someone, no matter what their physical flaws, they always become more beautiful in your eyes. Acne can definitely be transcended. A lot of people might even say they wouldn’t date someone with acne, but when it comes down to it, if they found someone they really liked, it honestly wouldn’t matter to them.

My Experience with Dating and Acne

In all my years of having mild (and sometimes moderate acne), I have dated plenty of people, who obviously either didn’t notice or didn’t care. Having acne was probably a lot worse for me than it was for them, because I was embarrassed about it thinking that they cared, but they obviously just didn’t give a hoot.

When my acne got severe, well, I was too traumatized to even think about going near the opposite sex. But even with my skin that bad, I actually had quite a few people who were still very interested in me –  during, and after, while I was still dealing with the bright red scars. This was surprising to me, but it goes to show that even acne that bad can be looked past.

And what about me? Have I dated guys with acne? Yep. I have dated guys who get spots and it didn’t bother me. No one with serious acne, but that situation just never came up so I can’t say whether I would have dated them or not.

Confidence. Hard to harness when you have a face full of acne, buuuuttt… it’s sooooo true that it matters above all else.

Many people just know that their acne keeps them from being able to date, but more than likely it is because many people with acne will act shy, distant, and ashamed of themselves (not to mention, they don’t actually ask anyone on dates!), which is actually what wards people off – not the acne! There is nothing more unattractive than being completely uncomfortable with yourself.

People are seriously attracted to confidence. It is the ultimate trump card for everything else.

I was recently having a conversation with a long time male friend of mine who used to have a decent bit of acne. Of course he was embarrassed about it, and he never got girls. But then one day he just said ‘fuggit’  – he would pretend to be confident and go for it anyway.

Like magic, despite having the same amount of acne – he found himself with all sorts of female attention. Crazy, hey?

I asked him whether it would work in reverse. For him, would a girl with confidence in herself be able to overcome all flaws she had, including acne? He said ‘Absolutely. There is nothing more attractive.’

I also recall him telling me a story a long time ago about someone we had gone to high school with who had always had pretty severe acne. This guy had a lovely, gorgeous girlfriend. One day, the guys implored to him desperately “How is it despite your skin you were able to snag this amazing girl?”

You might also recall that I wrote an article some time ago called “You Can Be 100% Overwhelmingly Beautiful, Even With Acne“, where I told the story of a girl I had met while travelling. She had acne, yet she was seriously the apple of all the boys’ eyes because she was so confident in herself.

Tips for Gaining Confidence and Dating With Acne

Dating and acne. Tell your stories, tips, tricks, and personal confidence boosters in the comments below. Go.