Are You Suffering from “Diet Envy”?

This is a guest post from a really awesome reader named Hanna. Hanna believes that eating well shouldn’t be stressful and blogs at A Chai Kind of Day about easy recipes, healthy living, and learning to make food choices that make you feel good.

Hanna is going to be doing semi-regular guest posts for The Love Vitamin from now on, so please welcome her.


So, this is very candid- there are two things that I have had quite a complex about for a long time now.

I don’t really fall in either category; my skin is in progress mode. I was a lacto-ovo vegetarian for years, but I ate pretty mindlessly. I’ve eaten far more than my share of fast food grilled cheese sandwiches, fries, and frozen cheese pizzas. The only reason I started scouring the internet and books for information on the diet-skin connection was because, at some point, the clear skin I once had was not so perfect anymore. 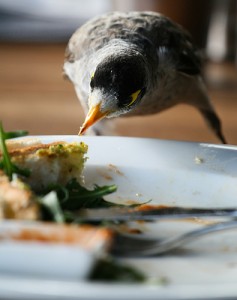 Every increasingly restrictive diet I began to research required an incrementally higher level of discipline. But that only made each one possess an allure greater than the last. If anorexics are envious of those who have more discipline, restrict more calories, and are “rewarded” with the most extreme thinness- the reward I wanted to attain through diet discipline was healthy, clear skin and thicker hair.

This mindset sets you up to feel terrible when your willpower “fails” and you eat something “bad,” instantly fearing that it will cause your skin to get worse.

First, I read up on being gluten-free. Then, a beautiful girl who works at Whole Foods told me she doesn’t eat any grains or processed food and gets meat from a local farm, I would start to think that must be the secret to feeling and looking good.

Then I thought that being gluten-free and vegan had to be the key to a penultimate level of health and beauty. I had fallen into not just envy of those with perfect skin, but diet envy, too. Why couldn’t I just get that so-called “raw glow” instantaneously? If diet envy isn’t a quintessential phenomenon exclusive to health foodies, I don’t know what is.

I had begun to feel that being vegetarian wasn’t “good enough.” If it was good enough, why wouldn’t I have a great complexion?

However, I actually can’t classify my diet consistently as anything but pesco-vegetarian, though on many full days I actually eat vegan. Mostly gluten-free, salmon occasionally, eggs occasionally, and no dairy except what might slip in, for example, via some non-vegan chocolate. But my diet status might change at some point.

Here’s what I think you can do to prevent food from becoming an obsession, whether you are trying to realize clearer skin, weight loss, or generally improved health. These suggestions are easier said than done, but serve as a reminder for myself as much as anyone else!

1. Remember that your identity is not inextricably linked with your diet.

I think this may be an issue only for those of us who are very conscious about what we eat. If you feel that your identity in a social context has everything to do with your diet, cooking, and moral positions on food, ask yourself: would you know who you are if you weren’t a veg*n, etc.?

2. Remember that there are no prizes for being on the [label] diet the longest.

I can’t deny that I got some kind of pride in telling people that I had been a vegetarian for 10 years before I tried meat over a period of a few months last year. Then how could I classify myself? Vegetarian for 10 years with a short break? Are there even “breaks?” But this kind of thinking is neurotic!

3. If your diet is creating more stress than you think it should be relieving (by experiencing increased energy, clear skin, etc.), ease up on certain “rules” you’ve set.

Your mind is powerful, which means that stress is powerful on its own. The body can produce effects congruent with a placebo that one believes is real medication, so imagine what else the mind can do.

-For example, if you don’t have the time or budget to make a green smoothie every day (as I have realized), don’t! Get your greens elsewhere.

If you decide to alleviate feelings of deprivation and eat something you don’t normally have, at least give yourself permission to really enjoy it. Sometimes, the payoff of a small indulgence is greater than ignoring a craving and binging later on something you refused to allow yourself.

5. If there’s something you really miss that’s not part of your chosen diet, you must find a replacement.

This means get in the kitchen! We can’t deny that food has strong emotional attachments. -For one, I’m going to miss my soy chai from Starbucks, so I’m working on perfecting my own chai recipe (and gluten-free baked goods/pizza, so on).

When you read a handful of similar health/foodie blogs, those who may be, in reality, part of a fringe community can start to seem like they have all the answers.

If you take one thing from this article, remember that if the personal answers you find don’t fit yourself neatly into a specific diet box, it’s okay!

I don’t know about you guys, but I personally like the idea of having contributions from other people on this blog. Everyone has different challenges in their journey to better health, clear skin, and happiness – and I’m only one person with one set of experiences. I believe that having fresh perspectives is very helpful! Let me know what you think.