Do I Have to Go Gluten Free to Clear My Acne? 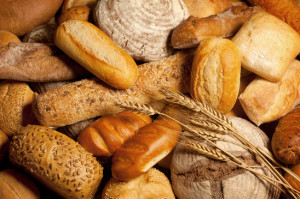 Gluten free – probably the biggest diet trend that has hit this side of the 21st century.

But what’s the deal? Is it legit? Is gluten that bad?

First of all, if you don’t know what gluten is, let’s get back to basics. It’s a sticky protein that is found in wheat, rye, barley, kamut, and spelt. Oats don’t naturally contain it but are almost always contaminated with it.

Therefore, it’s also in everything that is made from those grains: bread, cereal, pasta, muffins, oatmeal, cake, cookies, doughnuts, and pastries. It’s also hidden in lots of processed foods you might not suspect.

People who are into health have some very strong opinions about gluten. In some diet camps (particularly those who lean paleo), gluten – and in fact, all grains – are considered the work of the devil, sent to earth to ruin your entire digestive system, and subsequently your life. They consider gluten to be very bad for everyone.

Others say that significantly fewer people are actually truly sensitive to gluten. Perhaps 20% of the population.

Maybe You Gotta Avoid It, Maybe You Don’t

I have no way to know the true percentage of people who shouldn’t eat any gluten. But I do know that it can be a real issue for many people.

Some people have celiac disease, meaning that their body literally attacks their own body when they eat gluten.

For others, it’s not AS serious, but the gluten will cause an inflammation in the gut which can then lead to inflammation in your skin. You might notice that you experience obvious digestive problems in your day to day life (bloating, constipation, lethargy, brain fog, heartburn, etc), or you might have no symptoms. Truthfully, it’s pretty hard to tie any digestive upset you experience to gluten since it’s generally eaten all the time by most people.

But anyway, many people say when they quit gluten, it’s like their whole world became brighter. They felt great, like a fog had finally lifted.

And acne? Gluten does seem to have something of a correlation with acne. After dairy, it seems to be the most common food that can cause breakouts for people.

So the answer to whether you have to cut out gluten to clear your acne?

But yeah. I mean, going gluten free is a lot easier than it used to be since it seems like ‘everyone’s doing it’ these days, but it’s still not easy. In fact, it can often be a royal pain the ass. So it’s probably not something you want to do if you don’t have to.

However, if you’ve got a stubborn acne problem that isn’t responding to other natural treatments, and you’ve never tried going gluten free – it may be worth trying it for a while just to see what happens with your skin and how you feel. It’s the only true way you’re gonna know how gluten affects you. Consider giving it a shot for at least two months (just google “starting a gluten free diet” and there are plenty of resources that will teach you the ins and outs of how to actually do this).

If you notice that you get symptoms after eating gluten – bloating, foggy head, lethargy, other digestive symptoms… then it’s more likely you are sensitive to it than if you didn’t get these symptoms. But sometimes gluten intolerance is silent and you really don’t know it’s affecting you until you stop eating it.

That being said – if you’ve tried going gluten free and it’s not making a lick of difference to your acne, then perhaps avoiding it at all costs really isn’t worth it!

My Personal Journey And Feelings on Gluten

When I first was trying to get rid of my acne, I went completely gluten free and stayed strictly gluten free for maybe a year or so. I slowly started eating more and more of it.

It is hard for me to say exactly how much of a role my lack of gluten played in clearing my skin. And I’m still not exactly certain whether I am truly sensitive to it or not. I never really found that for me quitting gluten made my whole world come out of a fog. And I don’t really notice any particular symptoms after I eat it.

I find that at least in my current state of being, gluten in moderate amounts doesn’t seem to be a detriment to my health or skin.

However, I admit I still have trouble shaking that wonder about whether the paleo folks are right, and it really is the work of the devil!

Therefore, I do try to reduce the overall amount of gluten that I eat. I try not to plan meals into my every day life that are outright glutenous. I don’t really eat much pasta. I try not to have sandwiches for lunch regularly, or at least not several days in a row. I will choose gluten free alternatives if they are there.

If I do consciously choose to eat gluten at home, I try not to eat a lot of it all at once. And if I want to use some flour in cooking, I use whole grain spelt (an ancient form of wheat that is supposedly easier to digest). And I try to definitely avoid white bread, or “white gluten” as much as possible. But I do still eat it if it’s a special occasion.

That being said, due to the sheer amount of gluten in this world, plenty of it still sneaks into my diet even with my attempts to kinda sorta avoid it.

At this point, a lot of my aversion to gluten has to do with the fact that I believe that, in many cases, heavily processed foods are worse than a particular food group like grains.

The fact is, most of the stuff that contains gluten is very processed. And even the gluten free alternatives are super processed. Just because you’re gluten free doesn’t mean you are automatically going to be healthy.

Bread (yes, even brown bread) from the store is processed and with suspect ingredients. Cereals and cakes and pastries and doughnuts and muffins are the same, and most are made from white flour and sugar. Refined grains and sugar will cause acne by creating blood sugar swings, which can lead to higher androgenic activity in the body. This can lead to acne.

I just don’t feel that good about eating that stuff. So I try to avoid it, even if that doesn’t always work.

However, I recently found that there’s a lady at the farmer’s market in town who sells homemade real sourdough bread. Real sourdough bread is the old way of making bread, where the dough is risen by aid of natural bacteria which break down the grain and gluten and make it much easier for you to digest. Many people who have trouble with regular gluten can eat sourdough without dramas.

I now buy this every week and eat it, and feel very good about it.

I also feel fine about eating gluten while I’m at a restaurant, or eating with friends. For me, it’s just easier to just let life flow like that.

So, yeah! That’s my story with that! You might not be the same. You might find that you really cannot eat gluten no matter what without suffering the consequences.

But you never know – it might not be forever.

I do believe that as we go through our journeys toward health, our bodies get stronger, and the bacteria in our guts get heartier, which means that maybe one day you can eat gluten without a problem. This may be the reason that I can eat a lot of the things now that may have caused me acne in the past.

Have you tried going gluten free? Has it made any real difference in your skin?