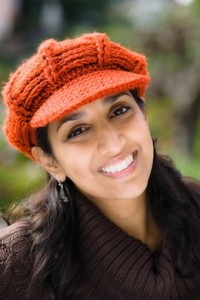 Greetings from India! As you may know, Luke and I have been traveling in India for the past two months… the Indian part of our adventure is about to come to a close now – we are headed to Nepal for three weeks for some trekking and white water rafting. Then back to Canada!

India has been a blast; I will update with a wrap up of my experiences when I get home. For now if you are interested Luke has been keeping up a travel blog which relays in pics and beautiful prose what we’ve been up to on this adventure. Check it out.

In the mean time, I wanted to write a post about Indian remedies for acne!

India has an ancient natural health system called Ayurveda. Unlike Western medicine (which diagnoses the disease and then tries to kill it), it sees disease as a symptom of an imbalance and therefore aims to treat the imbalance. It looks at the health of the whole person instead of just the part that is sick.

Therefore, Indians are very open to natural remedies (I suppose it’s not a surprise I have many Indian Love Vitamin followers!), and I wanted to list a few of their remedies for acne for you. If any of my Indian readers have tried these, please let us know how they work! 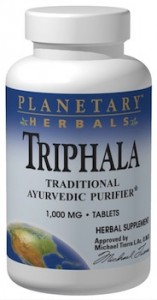 Triphala is a powerful Ayurvedic remedy containing a mixture of three Indian superfruits – Amalaki, Haritaki, and Biphitaki. The fruits are dried and powdered and usually made into capsule supplements.

This may be the most famous acne cure from India, as I had known of it prior to visiting India and have heard good things about it. Even us Westerners are using it!

For many people, acne can be a result of poor digestion creating inflammation, toxins, and contributing to an overloaded liver and hormonal imbalances. The powdered fruits used contain powerful protective antioxidants and have properties that tone and strengthen the digestive system, leading to much healthier skin.

Turmeric is that bright yellow spice (stains everything yellow!) that Indians love to use in their cooking. Most western people probably wouldn’t think twice from the next spice, but it is a very powerful anti-inflammatory and liver aid.

Aside from adding it to their food, many people take turmeric in capsule form as a supplement, and some people love to use it as an ingredient in a face mask. I even wrote a blog post about turmeric a long time ago!

Acne is inflammation; it’s inflammation in the body that could turn a benign clogged pore into a raging volcano. Turmeric can help sooth that inflammation as well as get your liver working tip top (it is often found alongside milk thistle in liver support supplements). A clogged liver is a huge contributor to hormonal acne so helping it out is going to go a long way toward clear skin. 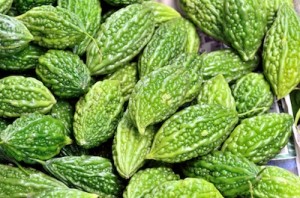 Bitter gourd (called karela in Hindi) is a funny looking little vegetable that I have seen around in the markets here in India and wondered what the heck it was. Who knew it was a powerful acne cure!

To use, Indians drink the juice or eat the flesh of the gourd, or they put it on their faces as a mask or spot treatment. Unfortunately true to its name I hear it is horribly bitter! Luckily you can also take it in supplement form if you wish, although it’s probably not as powerful as the real thing.

Bitter gourd is said to cleanse the blood and regenerate the liver. As we’ve already said, a congested liver can have trouble with regulating the toxins and hormones in the bloodstream so bitter gourd is helpful for cleaning up both.

According to an Indian Love Vitamin reader named Dipika, other Indian remedies for acne include:

So, Indians and Westerners alike – have you ever tried any of these, or any other Indian or Ayurvedic acne remedies? Share your thoughts and how they worked in the comments below.