My Life Without Alcohol 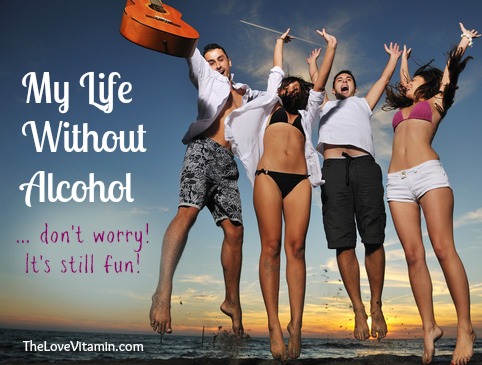 When I started clearing my acne holistically 4 years ago, I decided to give up alcohol completely. Initially it was for the health benefits, but to this day I still don’t drink any alcohol.

Sure, I’ll have a chocolate bar – or even cheesecake – every once in a while (because I love chocolate and cheesecake), but I rarely, if ever, have a drink.

I’m not saying this to sound like a goody two shoes, or because I think alcohol is soooo bad that I won’t touch it. I honestly don’t think it’s a big deal to have a few drinks sometimes. If you like to drink, I’m so not judging you, I’m just sharing my own experiences here.

Unless you’re consuming huge amounts of it on a regular basis, personally I think the sugary soda & stuff it gets mixed with is worse than the alcohol.

The reason I’m talking about this is because some of you out there who are regular drinkers & partiers might be on the fence about giving up alcohol…. you’re thinking about it, but you are concerned about who you will be without that crutch. Which is a totally valid concern.

Before I gave up alcohol, I was a bit of a party girl. I liked to go out at least once a weekend and I always drank to get drunk.

Okay, not like black out drunk – I was always great at monitoring my alcohol intake and knowing when to slow down and get on the water. And I never felt like I had a true drinking problem – I never felt like I “needed” it, and I didn’t do it to numb my life or drown my sorrows.

I just thought that inebriated feeling was a lot of fun.

I was never much of a casual drinker, because to be honest – I don’t enjoy the taste of alcohol at all. Beer, wine, spirits (ugh, especially spirits) – never really did it for me. Just having one drink or so never really seemed worth the trouble.

No, if I was going to drink, it was for a purpose – to be tipsy and lower my inhibitions. I liked who I was when I was drunk. I could talk to anyone, flirt with anyone, and I thought I was really funny when I was under the influence (haha… whether that’s true or not remains to be seen).

Of course, that always left me with a pretty little hangover, and a whole day wasted on recovering.

Either way, I’m not going to lie – I had plenty of fun back then. But it was sort of getting to the point where I was getting a little tired of it, and the whole acne thing gave me a really good reason to take the plunge and say enough’s enough.

So I went cold turkey and stopped the binge drinking. And because I don’t like the taste of alcohol, I don’t casually drink at all either.

What Changed When I Gave Up Alcohol

What I have found is that I’m still awesome even without alcohol. I can still carry on a great conversation while sober, and I’m still pretty funny.

I do find it slightly more difficult to strike up random conversation with strangers at parties, but I also realized that I mostly don’t really care.

I sometimes miss that a little bit, but in the end, I just don’t go out as much and don’t feel like I’m missing out on a whole lot there.

I have found now that I much prefer to spend my time with my close friends and husband, all of whom do like to drink. But I feel perfectly at ease, talkative, and funny when I’m with them, and none of them care or judge me for not drinking.

To be honest, I’ve never found that drinking alcohol ever enhanced the experience I have with my close friends. If I feel that comfortable with them, why would I need to lower my inhibitions in order to have fun with them?

And it’s not like I never go out at all. I still sometimes like to go out dancing.

Yes. Dancing. Sober. I have no problems dancing sober. Once I get into it, I’m in the zone. Don’t need no booze, sir.

When I do go out to parties, it’s sooooooo much easier.

And my friends love me because it means they can drink and not worry about how to get home. I just drive them.

People spend a ridiculous amount of money on alcohol. But I get to save that for something more lasting.

Of course I feel better. I never have hangovers! Ever! Amazing!

And I’m sure my liver’s a lot healthier, which makes me healthier overall (and my skin look way better too).

Now I use my not-hungover leisure time to do things I like that don’t involve lying in bed feeling like ass. I get so much more done now than I ever did back then.

And what I do with my time now feels so much more creative, nourishing, productive, and satisfying than that.

Heck, I built The Love Vitamin from the ground up, which I’m sure I never would have done back then. I wouldn’t have had time between work and hangovers.

There have been a few times since I quit alcohol that I decided I would give it a try again, and maybe throw back a few for a special occasion.

I regretted it almost every single time when the hangover hit. I just hate wasting my time on hangovers now. It’s just not worth it to me anymore.

No Alcohol Benefit #4 – My Friends Have Changed

You might see this as a blessing or a curse. When I quit alcohol, I did in fact grow apart from many of my friends who I used to party with.

It’s not that I don’t like them anymore; it’s just that it happened naturally because it turned out we didn’t really have all that much in common besides partying.

This might make you a little sad, but if people don’t align with who you are and don’t jive with your new choices, then they don’t. You will then attract people more aligned with who you are now, and that’s okay. In fact, that’s awesome.

My friends now all like healthy outdoorsy stuff like me, and while they do drink casually, it’s not like drinking is the only thing they’re all about. So we have things in common outside of drinking. And most importantly, they totally don’t care that I don’t drink. They know I’m awesome with or without it.

You may get different reactions to your new choice to not drink. Some people will accept it and love you unconditionally, and some people might not respect it and try to pressure you to do it anyway.

Just stay strong and confident in your choice, and if people don’t like it and don’t see your value beyond alcohol, then they aren’t worth your time. You are totally loveable and fun just as you are, without any extra “helpers”.

So anyway – that’s that. For me, there hasn’t been a whole lot of downside to quitting. People, including my family, might think I’m a little weird because I refuse to have even one drink, but I don’t really care. For me at least, life’s better sober.

(ps: I tried out some background music in my video this week! ha… I don’t know if the track was the right choice, but I’ll play around with it!)

Do you drink? Heavily? Casually? Do you enjoy it, or do you kind of wish you could quit but aren’t sure how? Share your alcohol stories in the comments below!