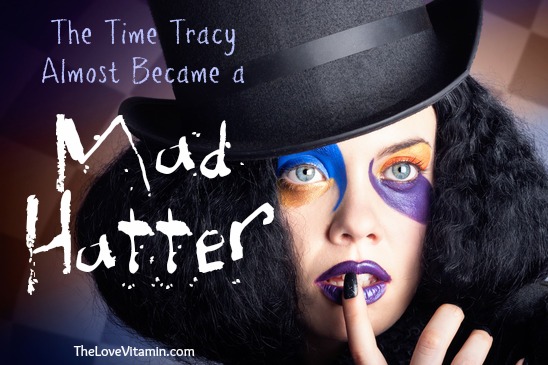 So I have a funny story to tell you, about the time when I went on a far flung journey to become a hat maker. Which happened to be spurred by the insecurities of dealing with my severe acne breakout.

Prior to the severe acne, I became really fascinated with this lady’s clothing creations, and especially the hats she makes. Hats like this: 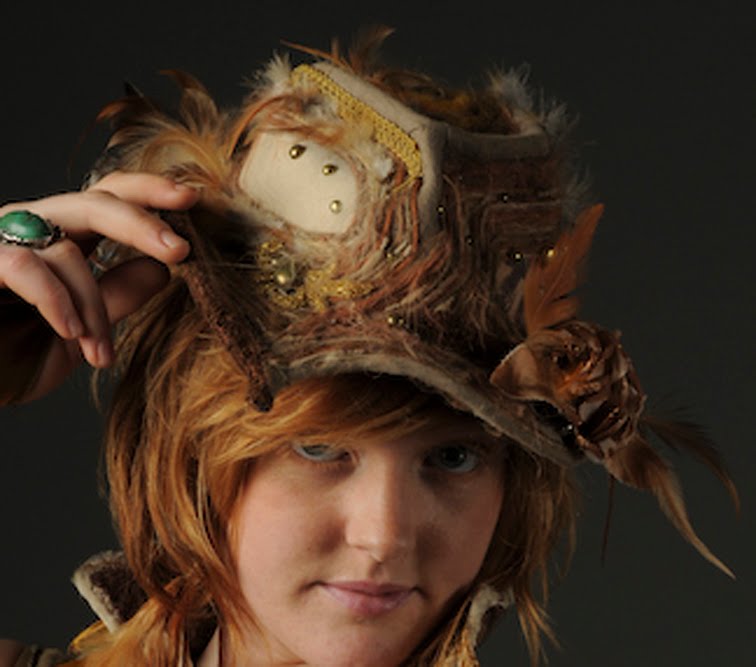 Her clothing is very costumey (meant for wearing at eclectic festivals like Burning Man)… to be honest, I could never afford any of it, and it’s not really “me” anyway, as far as actually wearing it went…

But since I have always been kind of crafty and like things colourful.. well, I really admired her extremely colourful and larger than life craftsmanship. And her larger than life personality too… part of me wanted to be her.

It was mainly her hats though… her hats inspired something in me like nothing other!! I desperately wanted to make hats like that! Just for me; my friends; for fun; and maybe possibly to sell if there was interest.

So I began to dabble in hat crafting, but had quite a lot of trouble with the actual hat part.

To be honest, what really appealed to me was decorating the outside of the hat. I never really wanted to make hats themselves. But if you want to decorate hats, you need a hat to decorate on…. you can’t really have one without the other…

However, I was so confused about how she created the shapes of her hats… they’re not very typical hat shapes, which is part of their charm. What materials did she use to create such crazy shapes? How did she do it? I emailed her a couple times to enquire, but she – understandably – always evaded my question.

When the bad acne hit me, I was at a very low point in my life. Here I was covered in acne… plus I had no idea what I wanted to do with my life. I had recently decided to move from the city where I was working in a pub back to my hometown to work at the kayak shop that I had worked at for the last several years.

I felt that was going to be better for me in the end – my health, my sanity – which is why I left the city. I’m not a pub-going city girl and deep down I knew that, but at the time I still felt like I was taking a step backwards. I was ashamed about myself, my skin, and the place in my life I found myself in.

Somewhere in this “identity” crisis of mine, I decided that I refused to just be a depressed girl with acne who still lives in her hometown and works at some nowhere job. I did not want people to see me that way.

I was going to learn to make my hats once and for all! And I’d try to take a stab at my own hat business (hell, I didn’t have a better idea)!

I was going to show myself – and the world – that the old, adventurous, stubborn me – still lived on! And that I could make something of myself!

Of course, much of this was driven by my desperate desire to keep up an image for other people – an image which I felt was being slowly decimated by my troubles with acne. I didn’t quite realize that at the time that that’s what this was all about, but it was.

Either way – first things first. I still had no idea how to make hats.

The best I could find was in San Francisco, so I satisfied my adventurous side by whisking myself off to San Fran (yes, still covered in acne) and dumping a bunch of my savings on a 4 day couture hat making course with 4 middle aged adults and a dog.

Here’s some photos from the adventure (trying my hardest to hide my broken out skin under my hair and a pile of makeup… doesn’t look nearly as bad here as it really was, and I think I was starting to see some improvement at this point): 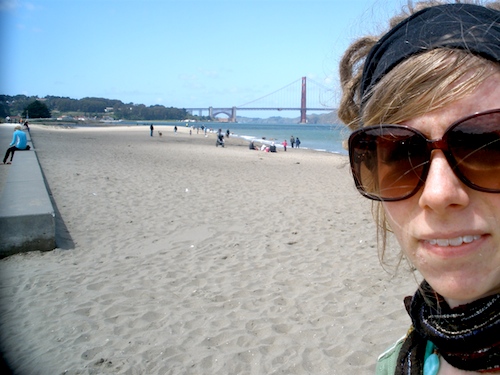 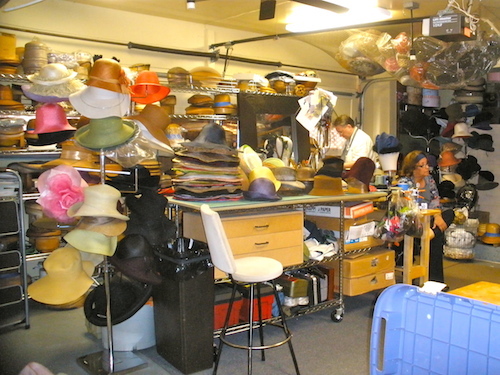 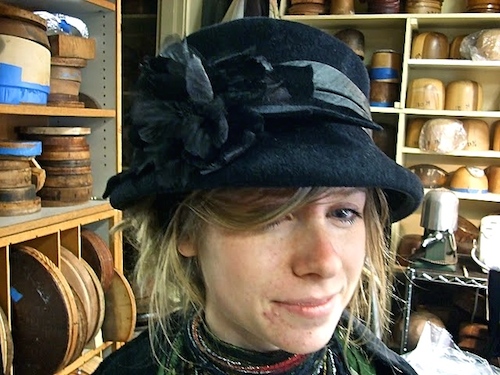 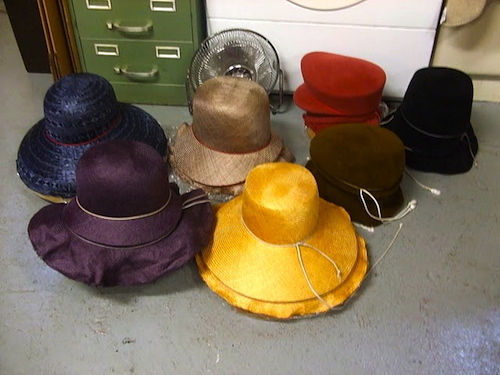 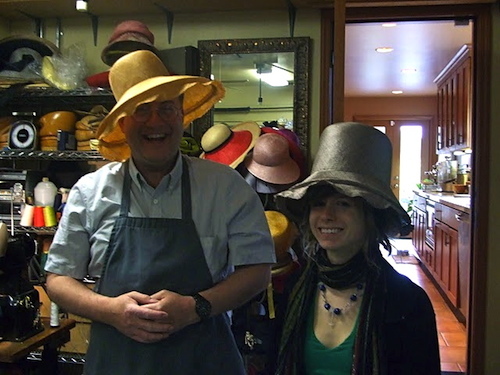 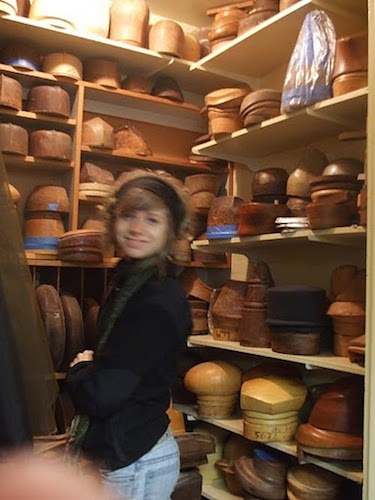 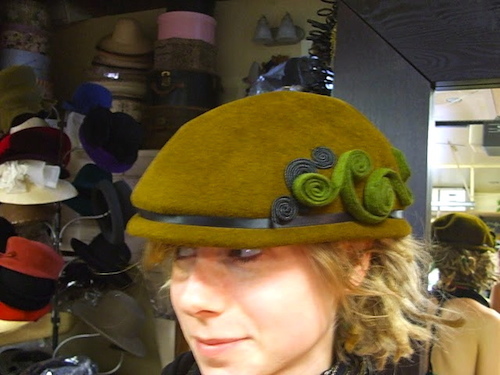 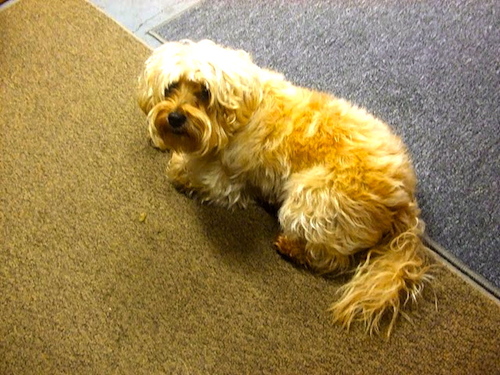 It was a fun week, but by the end of it, I realized that this was so not what I had hoped for. Making hats (at least the way I learned in the course) was way more complicated and time consuming than I’d ever wanted, required tons of materials, and … well… just wasn’t for me.

I am positive Kelsey (the inspiring hat lady) has some kind of shortcut for creating her fun hat shapes, but I guess I’ll never know what it is.

I look back at all this now and laugh, and part of me feels a bit embarrassed. Especially because for a really long time after my course, and sometimes to this day, friends and family would ask me about how my hat making was coming along, and I’d have to sheepishly say “it’s not”.

I kind of felt like ‘Tracy and her hats’ almost became a bit of a running joke.

And The Moral of the Story is…..

But the moral of the story is that I don’t regret it. Life is a funny thing that takes many twists and turns. Sometimes you have to go out on a limb and try things, just to find out that you failed or that it just wasn’t for you.

But every experience – even the ones you fail at – become part of a rich tapestry that makes up your experiences, of which every single one is valuable and important. You often learn just as much, if not more, from the things that didn’t work as the ones that did.

One day I would still love to figure out how to make one of those hats and finally make one just for fun, but through this whole thing, I did learn that being ‘Kelsey Faery’ was not who I was meant to be… I was meant to be myself …. and maybe if I didn’t jump on that plane to San Francisco, I’d still be chasing a dream that wasn’t really me.

So get out there. Even if you have acne, feel completely insecure, and don’t know what to do with yourself… you can still try new things, and live an interesting life. Even if things don’t turn out exactly as planned… it’s okay.

Because even if what drove me to go to San Fransisco was not the right thing (ie. my ‘image’ issues), and even though I was definitely insecure about my skin while I was there, and even though my hat making ventures were far from fruitful….

I still learned something, made some memories, and I’m proud of myself for at least trying to not let acne keep me home and away from living. And that’s a success in my books.

After all, one of the lessons I teach in the Naturally Clear Skin Bootcamp is that it’s important “act as if” in order to change your beliefs, get past fears, and become the person you actually want to become … we so often let our thoughts and feelings dictate our lives, but they don’t have to and neither does acne.

Feelings are just feelings. Insecurities are just insecurities. Thoughts and emotions can’t actually do anything to you. Just let them be there, and take a leap and be and do what you really want, even if you’re insecure about your skin. Even if it’s scary.

The benefit? Next time you do it, it won’t be quite as scary. And the time after, that even less.

Did you ever fail at something, but in the end, still found it to be a worthwhile experience? Share your stories in the comments!