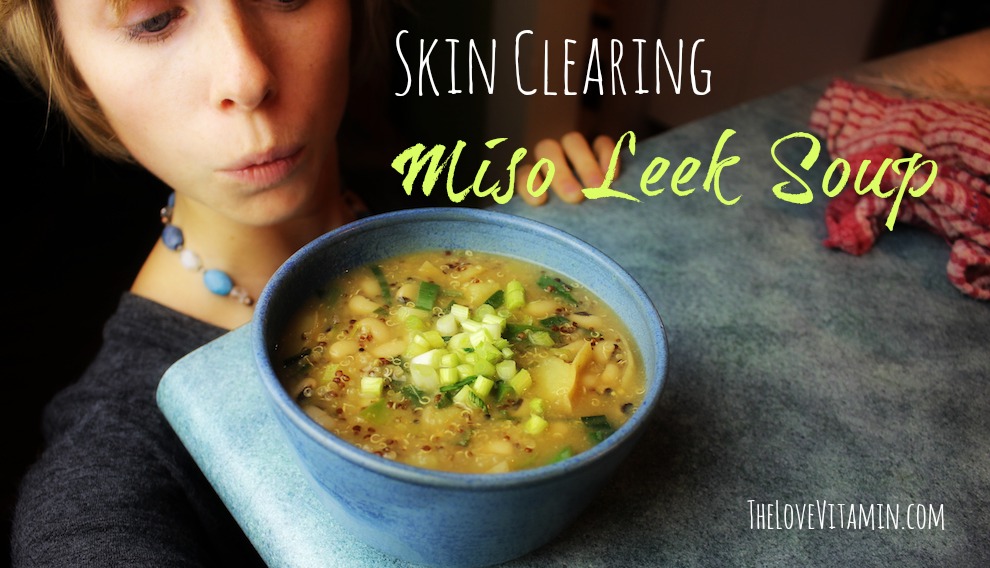 I’m personally a big fan of making large batches of healthy soups – that usually border more on a stew – that fill you up and you can get at least four or five good meals out of it.

Who doesn’t love saving time in the kitchen and clearing their skin at the same time?  *raises hand*

Plus I needed to get rid of the last of these pesky leeks from my garden: 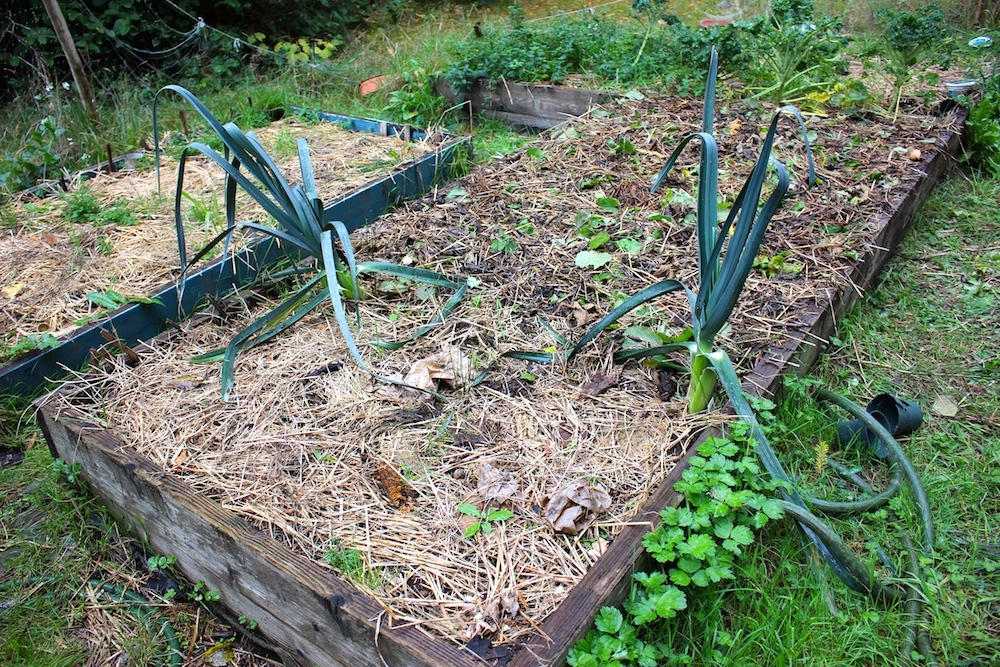 Okay so… miso soup. You know miso soup right? It’s that salty soup they give you as the appetizer at Japanese restaurants before your sushi comes out.

This is a definite twist on it because usually they don’t throw so many ingredients in it, but I wanted a real meal out of this. So I threw this together, and I must say I was not disappointed. It was deeee-lectible.

So let’s begin shall we?

Here’s a picture of our ingredients: 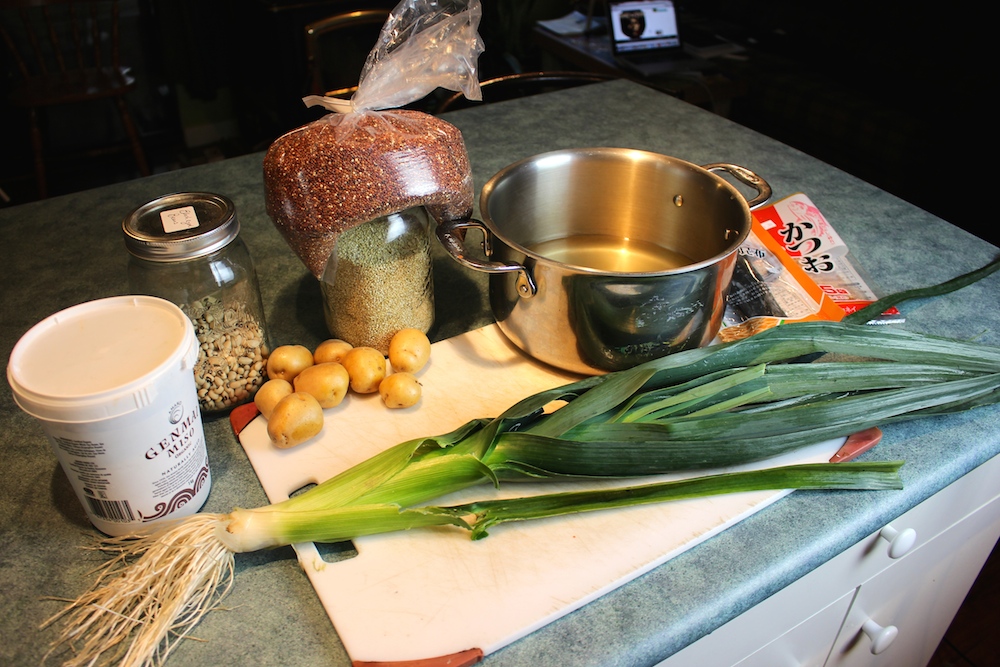 Dashi is Japanese seaweed stock. You know, like vegetable or chicken broth, except seaweed. It’s why Japanese stuff always tastes a bit like the ocean.

Now, you can get packaged instant dashi granules but apparently they don’t have very wholesome ingredients in them. You can also just plain omit the dashi too, or maybe substitute a dash of fish sauce. Otherwise, you can make your own SUPER easily… as long as you can find the ingredients.

So if you’re feeling adventurous like I was, head on down to your local Asian store (I even have one in my small, boonies town) and pick up a package of kombu, which is a thick dark coloured seaweed, and katsuobushi, which is a smoked, dried, and shaved fish. You may as well pick up the miso paste while you’re there too. 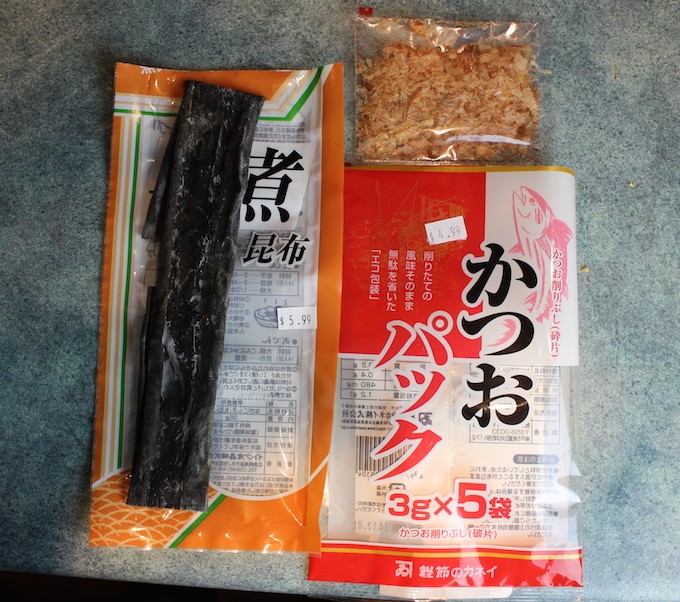 Place one stick of kombu (there will probably be several in the package) into a pot or bowl with 4 cups of cold or luke warm water. Then just let it sit there for 15 minutes to draw out the flavour.

After 15 minutes, set it on the stove on high and bring it almost to a boil. 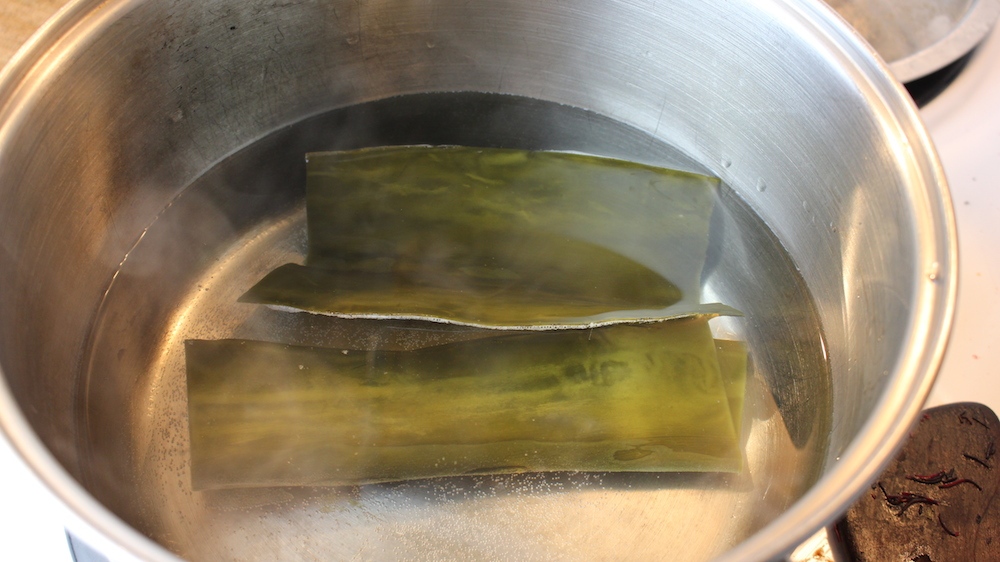 Once it’s almost boiling but not quite, take it off the heat and add your katsuobushi flakes, give it a stir, and let it sit for a couple more minutes. 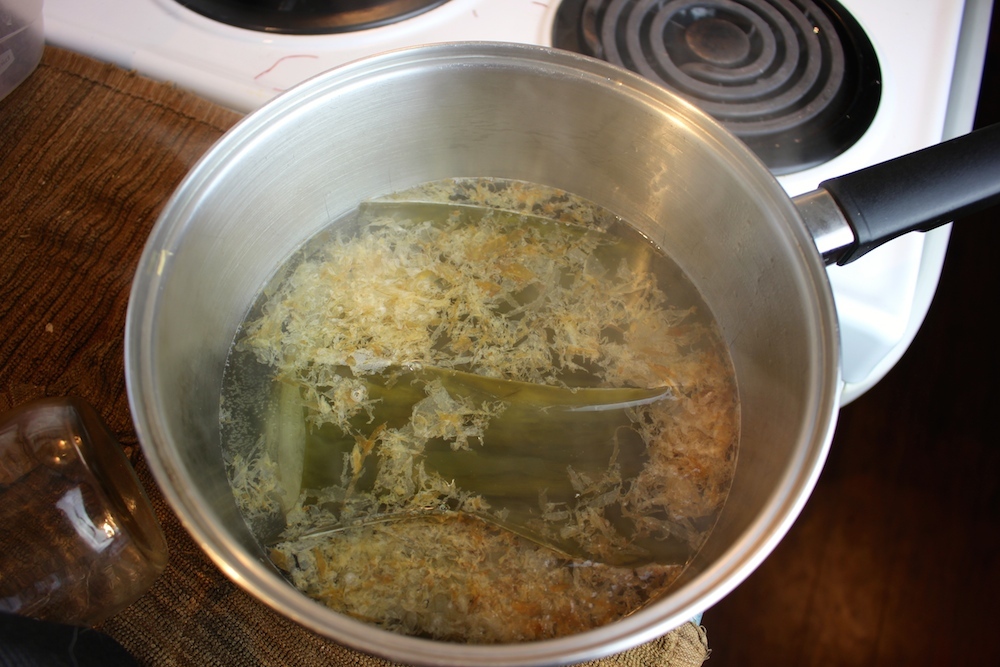 After that, strain it into a large soup pot, the one you are intending to make your soup in. It’s probably a good idea to strain it through some cheesecloth or a coffee filter to get the little tiny bits. 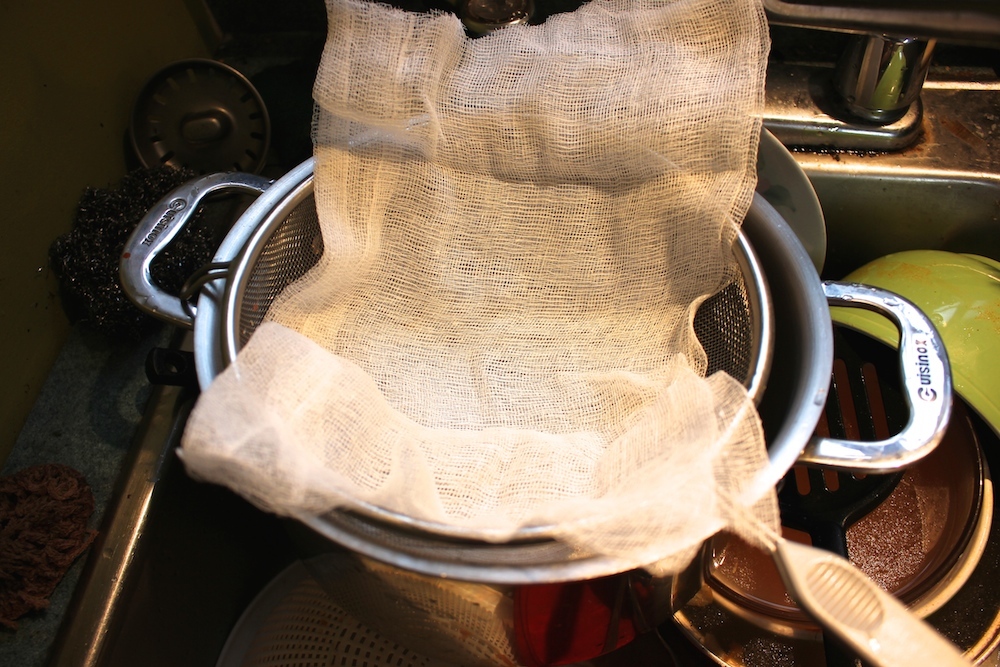 And that’s it! It was that easy. Now you have your four cups of dashi. Congratulations.

Continue on making the soup, or put it in your fridge for when you’re ready to use it. 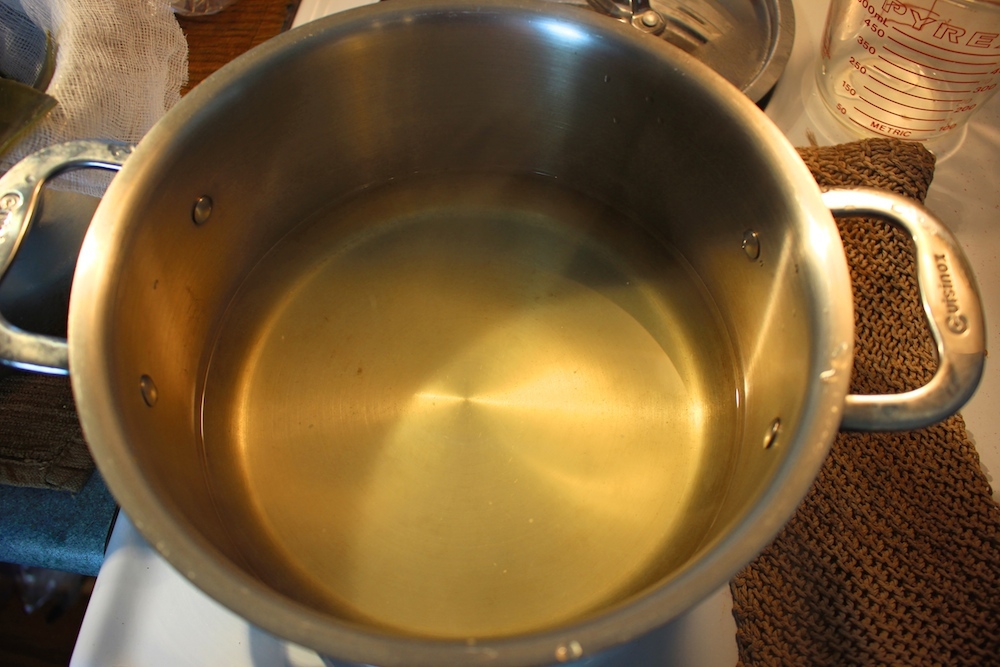 Making the soup isn’t too complicated either!

First step is that you’re going to want to add 4 more cups of water to your dashi. Or if you aren’t using dashi, just put 8 cups of water in your soup pot.

Second step, throw your 1 cup of dried black eyed peas in there. Rinse them off first if so desired.

Then bring the pot of soup to up to boiling, and then once it’s boiling, turn down to medium low and put the lid on. Simmer them this way for about 10 to 15 minutes. 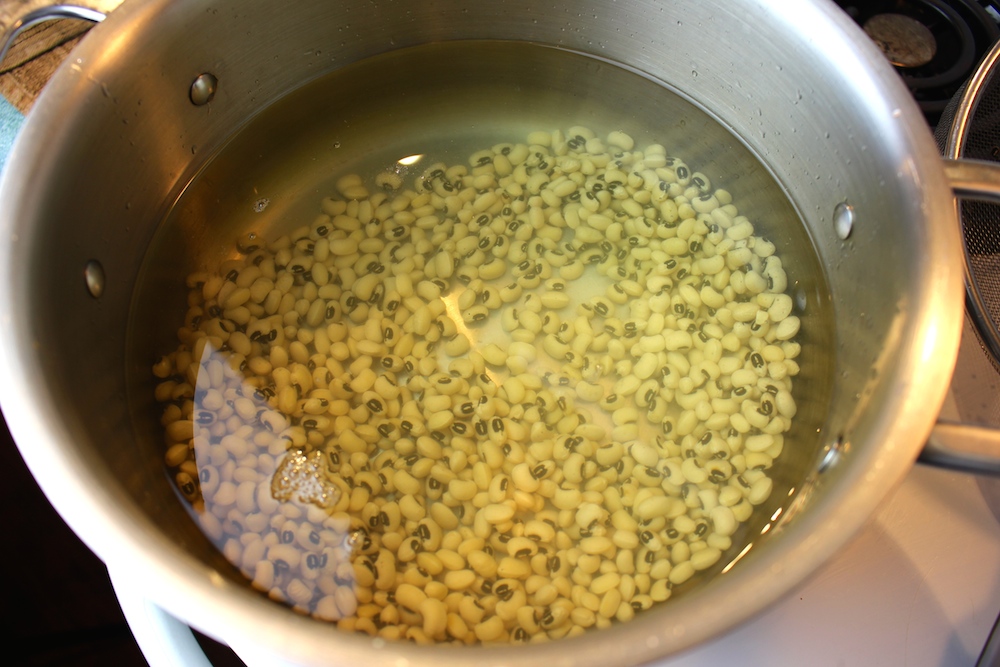 While that’s going on, you can just go ahead and chop up your potatoes and leeks. Make sure you wash your leeks really well first and pull the base of it apart to look for surprises… leeks are always hiding dirt. Always. 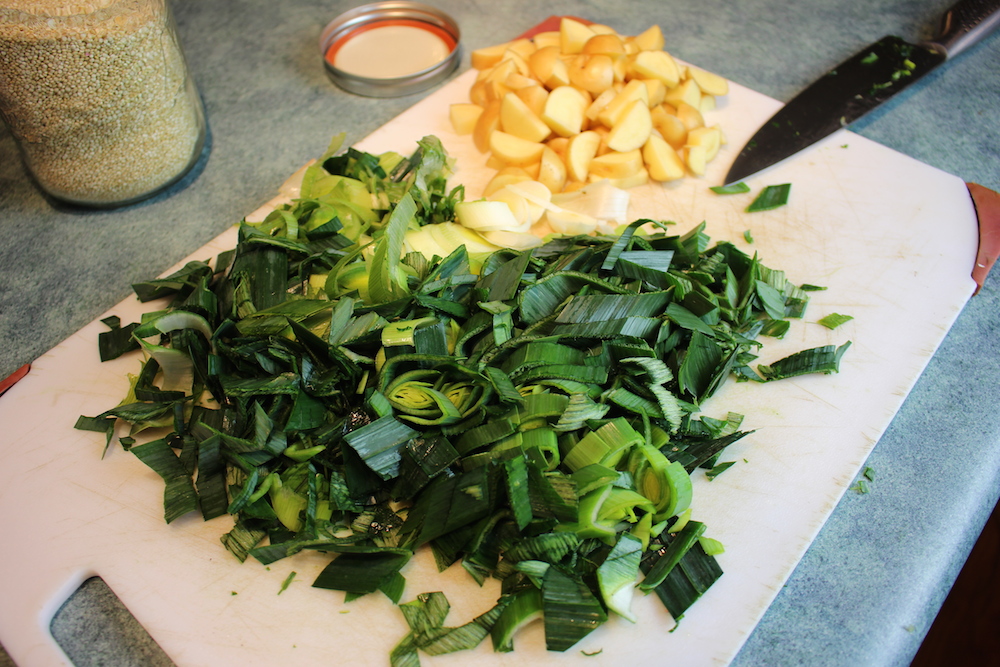 Alright, so after your beans have been boiling for 10 to 15 minutes, add your 1 cup of quinoa, and your potatoes. Bring back up to a heavy boil, and once it’s boiling, reduce heat again to medium low and put the lid back on. 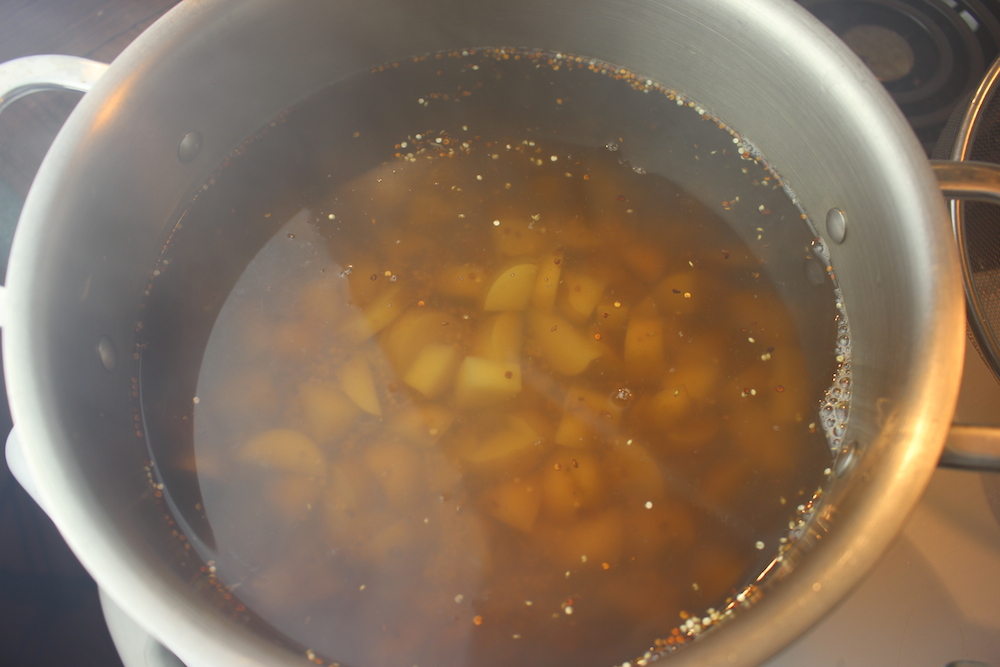 After that’s been going for another 10 or 15 minutes, go and add your chopped leaks and your 4 tablespoons of miso paste.

Now I know miso is soy, and we’re not a big fan of soy around here, but organic miso is fermented, non GMO, and purportedly much healthier for you than regular old soy products. So I make exceptions for a good ol miso soup, you know?

Anyway, go ahead and stir everything up really well to help the miso dissolve. 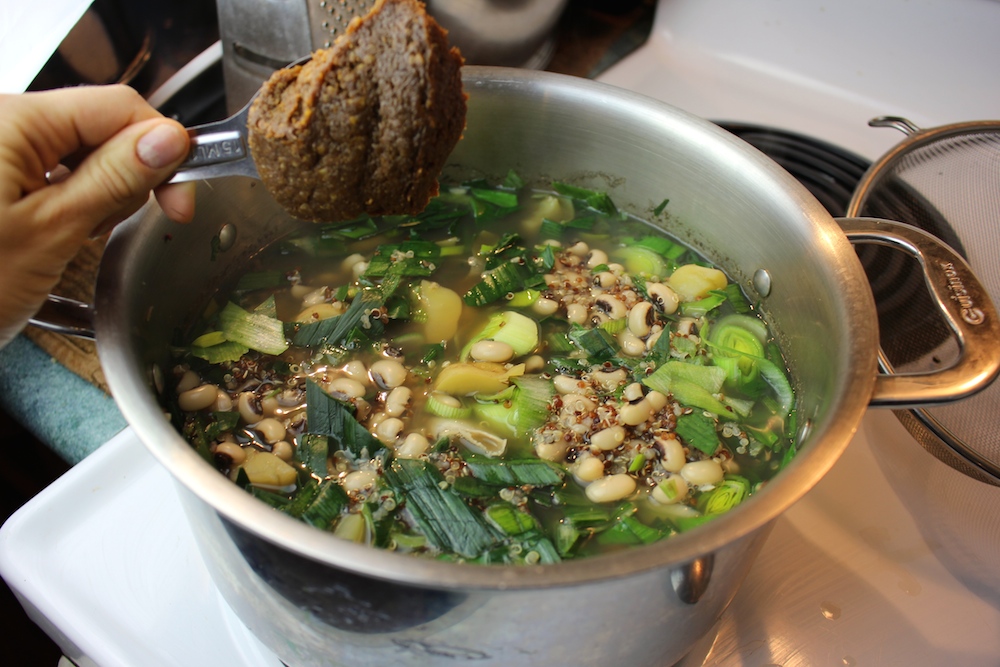 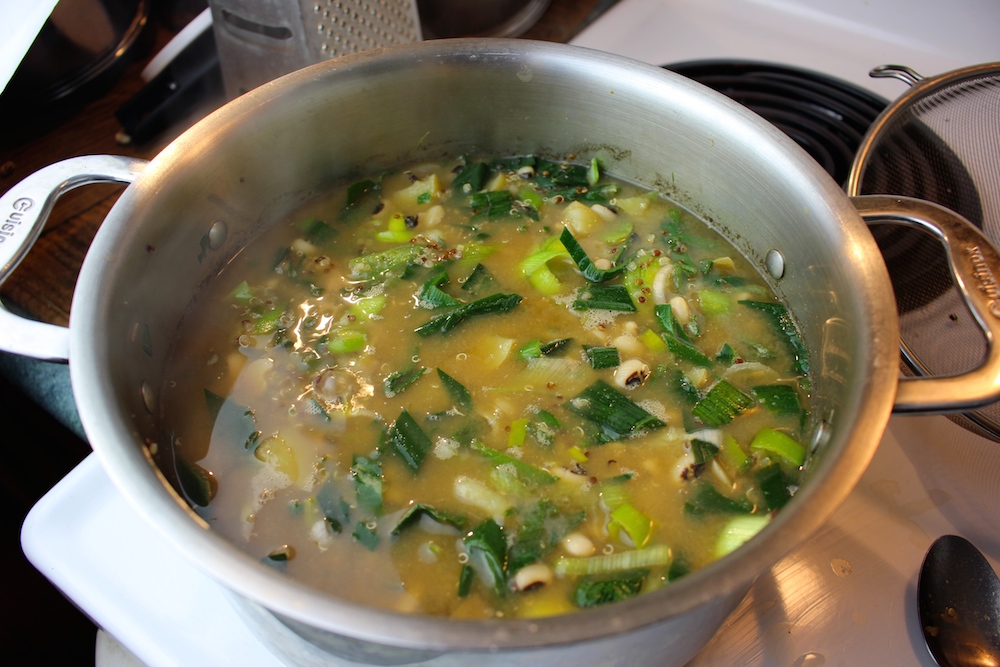 Let that simmer with the lid off for a few more minutes, until leeks are soft and miso is fully dissolved. Make sure to look out for miso chunks to break up, because sometimes it does need some help. Otherwise you’ll get salty miso bombs when you eat the soup.

Anyway! That’s it. It really wasn’t that hard. And I’m telling you, it was soooo good. 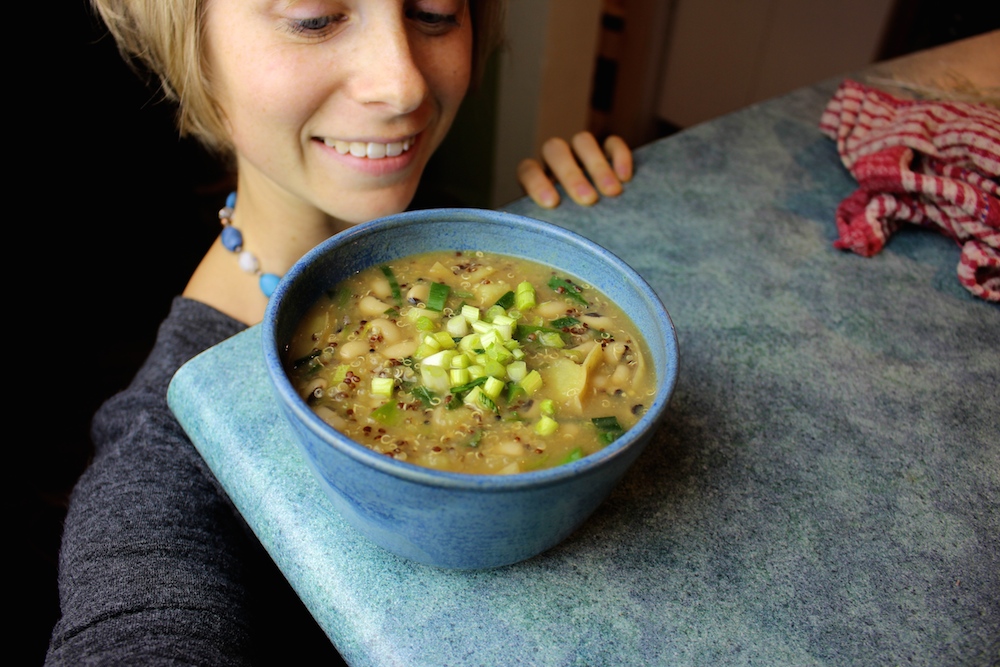 Want to learn more about how healthy food and a healthy lifestyle can help you permanently clear your skin and ditch those soul destroying breakouts that totally ruin your world?

Check out my Naturally Clear Skin ebook for my complete acne clearing system! 🙂