Choosing the Right Naturopath Was the Solution to My Acne 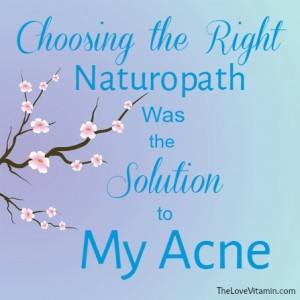 It was at my lowest point that I made what would come to be the best decision regarding my health.

I spent years and years suffering with acne (and you really do suffer, as much as you try and put it in to perspective, your personal suffering is always staring at you in the mirror, in a car window, any reflective surface acts as a torturous reminder of the ruined landscape of your face).

I finally decided to abandon all the routes that Western medication led me, many of them leading to dead ends or along roads rocky with unwanted side effects, and tackle the problem holistically.

A little of my background

I myself, like many females out there, began suffering from acne at the age of thirteen. It started as typical, scant teenage spots and persisted and also worsened as I progressed into my later teens.

After multiple over-the-counter products (too many to list), prescribed topicals, and various courses of antibiotics and birth control pills, I made the decision to go on Roaccutane at the age of nineteen.

After a mere two months I was beautifully clear for the first time in years, this lasted around one year before my acne began to return and I went on another longer, more intense course of Roaccutane at the age of 21.

My hair fell out, I lost weight, my knees and back ached, my vision blurred, but I eventually became clear again. It took a year for my hair to fully recover, by which point my acne had again returned in full force.

I had been led to believe by many Doctors that Roaccutane was the ultimate cure for my acne. It was prescribed to me as the ultimate, last end resort and explained that past patients had great success on the medication and never went into what they call ‘relapse’.

I now know isn’t a relapse at all but just your body returning to its natural state. Roaccutane literally dries you up, without any sebum, the hormones cannot ‘feed’ on anything and no acne is created.

I had put my body through so much, and it hadn’t worked. This was my rock bottom.

That was when I discovered The Love Vitamin

It wasn’t until finding The Love Vitamin website that came round to the realisation that I didn’t need to destroy my body with harsh medications and topical creams to gain clear skin.

Reading a story about somebody who had been through what I had with acne resonated with me strongly, as well as information on acne that was useful and relevant.

I knew that my acne was hormonal, and finally here was a way to target it without going on the birth control pill! I felt elevated. The Love Vitamin gave me the hope and courage to head on the journey of healing myself naturally.

I began to make subtle changes to my diet, cutting out dairy, taking zinc supplements and abandoning the harsh face washes and topicals. I did see an improvement in my acne, but it was apparent to me that I needed a supplement that would bring my hormones in line.

However, I was so desperate to clear my skin that I fell into a horrendous trap of buying every supplement going. This obviously wasted a lot of time and money, and also, as I was taking too many things at once, I was in the confusing situation of not being able to pinpoint what was doing what.

The whole thing was becoming a big mess. I was also researching incessantly, every spare minute of my day, on the way to work, on my lunch break, on the way home from work, nights and weekends.

My entire life was dedicated to clearing my skin. It was stressful. It was exhausting. It was counterproductive! It was at this point that I decided that I needed to see a Medical Herbalist (similar to a Naturopath).

My initial searches left me disappointed

One thing I would urge you to keep in mind if you are considering visiting a Naturopath or a Medical Herbalist for your acne is, no matter how desperate you may feel, go with your gut instinct.

Although there are people out there well versed in this profession who will ultimately try their best to help you and give you effective treatments, there are also unfortunately others who merely ‘dabble’, and some who are out to earn money off the vulnerable.

On top of this, some are genuine, but not well versed in treating hormonal issues. A few I contacted were honest with me from the start and informed me that they weren’t entirely sure that they could help me, and I appreciated that.

A few others seemed to want to grab me in quickly, without listening to me fully and explaining what exactly it was that they did. That’s when I went with my instincts and decided not to pursue it. I also still highly recommend you to do your own research.

I was doing a little too much research and it had begun to take over my life, however, by keeping abreast of the wide range of herbs and supplements out there, I had a good idea of what would work for me and it set off alarm bells when Naturopaths I spoke to hadn’t heard of Agnus Castus, or Evening Primrose Oil.

If it sounds like it’s going to be a waste of your time, it probably is. It was only when I came across somebody who I really felt was professional in their approach to holistic medication that I decided to take the leap.

He had an up to date, well presented website with a full list of appointment centres and information on his practices. He was honest and professional in our rapport. And finally, I had an appointment with him in a clinic centre in the centre of town.

We went through my full history, all of my medication and symptoms and finally, how my acne made me feel. He was very focused on the knocks my self-esteem had taken and the fact that acne had prevented me from living my life to the full, something that no other Doctor had ever bothered with before.

Although I had done a lot of my own research and understood my body and my acne, treating it myself was becoming chaotic. I had gaps in my knowledge and misconceptions from numerous reviews and fragments of the internet.

Alongside this I was fuelled with the desperation and deep seated longing of wanting, needing to become clear, leading me to panic and buy any supplement going.

I needed direction and I found it

I needed direction off somebody experienced, and who could tailor an effective plan specifically to me. When it comes to treating an individual for something as complex as acne, there is no one size fits all approach that covers everyone.

We are all different for a reason, which is why it can be so frustrating to tackle acne effectively as you could be breaking out for any number of reasons. Additionally to this, I was taking herbs and supplements that were great for my symptoms, but maybe not as effectively as I could be doing.

For example, I was having great success with Agnus Castus, but I was taking it in capsule form spread out through the day (two in the morning, two at night).

My Medical Herbalist advised me that taking it in liquid form in a single does every morning would be more effective, and that I should always aim to take it within 15 minutes of waking as that is when the pituitary gland is most susceptible to the herb.

Seeing a Medical Herbalist pulled my holistic healing route in to order to give me consistency and direction. Only then did I begin to see the full effect of the results.

I saved money, eliminated stress, and ultimately, got my life back. I have been consistently clear for four months. I have hope for the future. 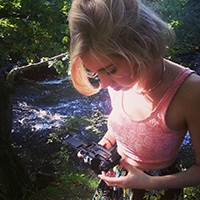 Grace Robin Doughton is 24 years old and she lives in Manchester, England. She loves travelling, painting, photography, and reading.