How Treating my Acne Holistically Saved Me From a Brush with Death (and a Missing Intestine!) 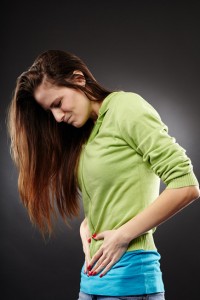 This is a reader story from Barbora – actually, it’s an email she sent me and it’s such a cool story that I asked if I could share with The Love Vitamin:

I am sure you receive a lot of similar e-mails every week. Nevertheless, I decided to write you and say thank you because mainly thanks to you, my skin and health and, consequently, my life got better. 🙂

My name is Barbora and I am from the Czech Republic. I am 23-year-old. I suffered from mild/moderate acne since I was 15.

I felt ashamed when somebody looked at my face closely, I lacked self-confidence (not necessarily because of acne), I hated when somebody pointed out when my skin got worse and that I should do something about (like I didn’t know better!)

At the beginning I tried to put various cosmetics products on my face (some cheaper, some not so much). Of course, it didn’t work. And my skin got much worse. I believe I threw it out of balance even more.

After some time (and several not-very-tactful comments), I gave it up and went to a dermatologist. She prescribed me some kind of face lotion and it worked quite well. But only temporarily.

And she also advised me to use some cosmetics which were pretty expensive (and suspiciously enough, she always recommended the same brand).

This pharmaceutical lobby annoyed me so much. It went like this for almost  3 years.

When none of the lotions worked anymore she said that the only solution is laser treatment or birth control pills.

I researched the laser treatment but judging from people’s discussions about it on the internet, I was not very convinced.

And I already had quite a clear opinion on the pill and didn’t have a boyfriend, so it was out.

That was when I decided not to see her anymore and started to look for solutions elsewhere.

My Family and I Find Out Cancer is Lurking

During that time my family was going through quite a tough period.  When I was 18, doctors found out that my sister (14 at that time) had polyps in her large intestine.

For those who don’t know what they are, polyps are like small growths that occur on the lining of the intestine that could turn into cancer down the road.

They immediately sent her to a hospital quite far from our home that specializes in that. My mum went there with her.

She was received in the department of oncology because they suspected the polyps might be malignant (ie. cancer). I don’t even want to think how difficult it must have been for her.

Fortunately, it wasn’t malign but the doctors said to my mum that they would have to remove the intestine completely anyway as a precaution, because it was still dangerous. They said that my sister would get a colostomy bag.

For those who don’t know what a colostomy bag is, it’s like this: when they cut out a large part of the intestine, it may then be too short, and they have to reroute it by making a small opening in the abdomen, from which waste will exit the body from then on.

However, how and when the waste exits can’t be controlled, so you have to stealthily wear a special bag over the hole at all times, under your clothes, to catch the waste – ie. the colostomy bag.

Yes, I know. Awful. Mum was sure that if my sister had heard that, she would have gone and jumped off a bridge.

You can imagine, it would be a horrible thing for anybody, let alone a 13-year-old girl whose main interest is to look great and be popular.

In the end, they decided to wait with the removal a bit until she was older.

Due to all this, the rest of us – my parents, my other sister, and me – had to have our intestines examined.

They discovered everyone except for me was OK. I also had polyps in my intestine. Not so much as my younger sister, but about ten of them.

I was shocked and miserable.

The worst thing was that doctors didn’t tell me what to do at all. They just gave me the results from the sample analysis with some numbers on it and that was it.

I thought there is no solution for that. Just to hope that it doesn’t get worse and become malign. It was awful.

Few months after that,  I decided to treat my acne differently.

I soon discovered your blog and started to change my whole lifestyle gradually. I cannot say that I had led a terribly unhealthy lifestyle until then. It was quite ordinary, maybe healthier than most people have.

But as we know, everybody is different and everything has different effects on each of us. I started to think much more about what I eat (I was probably too strict at the beginning).

I found out that I had to work on the emotional part as well, and maybe more than on the diet (which is relatively easy to influence).

I started to do yoga, meditation, simply go outside more, read books about this (Skin Deep is quite crucial) and so on.

This approach takes time and I was aware of that. From time to time I felt a bit desperate because sometimes it got better and then worse again.

I also hated when, for example, my grandmothers commented on the food I ate and didn’t eat, and would say that acne is not caused by food.

To make long story short, after 3 years my skin is completely clear most of the time now.

I know that I will try to maintain this lifestyle for the rest of my life because it makes me feel so much better.

Now, I can eat what I want and don’t break out, but I try to follow the rule 90/10 or 80/20 most of the time. And even my family member started to make some changes in their diets. 🙂

But Something Even More Exciting Than Clear Skin…

But I have to write you one more important thing. Last year I went to the doctor again and had my intestine examined after 5 years and there was nothing, not even one polyp!

The doctor was suprised. He said that ‘he cannot explain it logically’. Another doctor asked me what drugs I had taken…

I told them about the diet change but they simply don’t believe in that. Doctors can be so conceited sometimes.

At the age of 18, my sister had surgery, but thankfully they left her a part of her intestine, so no colostomy bag. She lives pretty normal life now.

But sometimes, I am wondering (and I am sure my sister and my parents as well) whether that would have been necessary if she had eaten more healthy diet.

Doctors said that she had a different type of polyps (mine can sometimes disappear “without a cause”, they said) and it is clearly some kind of genetical mutation (both my parents are healthy)…. but still… I will always wonder…

So in the end, I realize that acne wasn’t such a “bad” thing. My skin simply showed me that there was something wrong in my body.

I think I may have started eating healthily and living healthily if I hadn’t had acne. But acne (probably because it is such a visible thing) was the impulse that forced me to change something.

So once again, I am sending you a massive THANK YOU, Tracy. It was you who showed me the right direction.

I wish you a lot of love,