Am I Still Doing the Caveman Regimen? (Three & A Half Years Later) 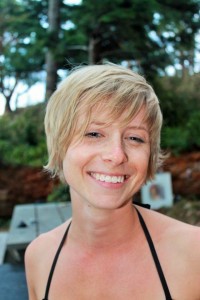 A question I get a lot – particularly whenever I post a picture of myself on The Love Vitamin’s facebook page – is:

Are you still on the caveman regimen?

It’s been three and a half years, and in that time I can only count maybe two or three times when I’ve actually washed my face or put anything on it.

If you don’t know, the caveman regimen is an “anti-skincare regimen”… because you essentially don’t do anything to your skin. You don’t put anything on it. You don’t purposely wash it. You just let it regulate itself.

You can read all about it here.

And it’s seriously been one of the best things I’ve ever done.

My skin is clearer, it heals faster … but the best part of all is that it’s just so EASY. It’s the EASIEST. What’s easier than doing nothing?The biggest benefit of that is psychological.

I’m no longer examining my skin in the mirror twice a day. My skin flaws are no longer turned discomfortingly bright red, post wash (making you think your skin looks worse than it really does).

I can do whatever I want – go camping, travel, stay over at someone’s house – without giving a thought about how I’m going to wash my face

It’s easier to just let it all go and stop thinking about acne.

And what’s better than that?

Since I’ve begun the caveman, I’ve heard of many natural external skin care treatments that do sound pretty good. I’ve probably written about many of them at the Love Vitamin.

I’ve been tempted to give them a try … my skin is good, but could it be even BETTER if I used these things?

In the end, I’ve never bothered. Because the psychological benefits of the caveman to me, far outweigh any slight improvement in my skin that I could get from going back to a skin care routine.

The caveman regimen sounds totally crazy when you’ve spent your whole life being told that obsessive washing and product use is the answer to clear skin.

In reality, for a lot of people, this is actually the biggest CAUSE of the acne itself. All those chemicals, all that washing – it’s drying, it’s irritating, it’s pore clogging.

For me, I switched from chemical products, and used natural products on my skin for a couple years before heading down the way of the caveman. Particularly washing my face with honey, and moisturizing with jojoba oil.

After recently learning about enzymes from Melissa Armstrong, I’ve realized that my use of natural skin care products prior to my switch to the caveman might have been why I have had so much success with it. My skin had already had time to begin repairing itself before I went full caveman.

Melissa has taught us that if you’ve used chemical products in the past – which we all have – then your skin is inevitably going to be damaged and clogged on some level.

To fix this situation, she recommends using natural skin care to repair this damage, particularly using natural enzymes masks, and keeping the skin hydrated with natural oils like jojoba, hemp, or argan.

After that you can go to extremely minimal natural skin care or the caveman regimen and you’ll have much more success than if you jumped straight from chemicals to the caveman.

(In fact, I’ve heard such amazing things about the papaya enzyme masks that I’ve decided to briefly come out of my cavewoman ways to try it out and do a video tutorial on it …. coming soon!)

Is the Caveman For You?

I’m never going to tell you what to do – the caveman is what works for me and it might not be your cup of tea … either because you think it sounds weird or gross or whatever….

But oh man. I love it. So much. Freedom is a thing that I value very highly and not having to worry about a skin care routine is so, so amazing. It’s honestly a dream come true.

Want to learn more about the caveman regimen? Check out my Caveman Regimen: The Ultimate Guide, exclusively available when you join the Naturally Clear Skin Academy