So as I mentioned in my last post, I’ve been breaking out a fair bit lately.

Ever since I got rid of the severe acne, my skin has gone in a pretty steady pattern of “clear for several weeks” followed by a short period of “less clear”.

It tends to loosely match up with my period, but not always.

So I tend to judge my skin on how many pimples I get in the “off season”.

With a relatively healthy lifestyle and the help of my trusty Estroblock & Thorne SAT, my less clear times have still been there, but I’m talking like… maybe a couple small pimples around my chin area (my most stubborn acne prone area).

Occasionally a bigger one, but not like those have also come flanked with a ton of friends. Also, these go away really quickly.

Perfect? No. But who is?

Real, actual, live people are not perfect and most everyone has some skin “indiscretions” if you really look. Me included.

Needless to say, I was definitely happy with it! The “off time” has consistently been better on Estroblock than when I haven’t been using it.

But this time, the “less clear” period has lasted much longer than usual, with a lot more pimples. Plenty of small ones, and a few bigger ones. Coming faster, and staying longer. The whole area looking obviously bumpy even under some concealer.

I mean, sure… it could definitely be worse. It could always be worse.

But it’s just gotten to that point where it’s starting to really bug me. The point where I’m like… ok. That’s enough.

The last time I had a breakout like this was when I had quit Estroblock. So when that happened, I just went back on it. But I’m still using it now so that’s not really an option!

Why Am I Breaking Out?

Honestly… I don’t know. I assume it’s just a hangover from eating so damn poorly in South America. I also took a couple rounds of short rounds of antibiotics this year that may have messed with my gut flora.

It all kind of catching up with me, I suppose.

It sucks because although I still haven’t been eating 100% perfectly since I’ve come home (yes, cheese still sneaking in there), I thought I was doing very well in the kitchen! Miles ahead of the crap I was eating while I was traveling.

I don’t think stress has been a factor, since I have been feeling quite at peace over the last month. I suppose exercise wise, I could do a little better… I’ve only been doing gentle yoga; I could probably do with some more vigorous workouts.

There is one thing I have been doing fairly differently though… I decided to put the strict caveman regimen on hold, and instead experiment with a little bit of skin care again. Just to see.

Every night, I’ve been using two drops of pure cold pressed argan oil… I still don’t actually wash my face, I just get my hands wet, and put the oil on my fingers and massage it into my face. And then put extra oil under my eyes.

And then every four or five days, I do a papaya enzyme mask.

The papaya enzymes are meant to rejuvenate and repair your skin… digest years of old scar tissue and clogged pores, heal hyperpigmentation, and even out your skin tone.

They’re supposedly amazing to use to get your skin renewing itself on its own, after years of damage from chemical face washes, creams, and makeups. And nearly everyone in my Naturally Clear Skin Academy has had such incredible results with it!

I’ve been doing this for over two full months now. Aside from the breakouts themselves, my skin really is looking super beautiful. I am really impressed with it.

However….. is it causing more acne?

Melissa Armstrong, who I learned about this from, has said it can cause purging as it brings all the impurities to the surface, so I don’t know if that’s what’s happening.

But my skin was totally clear for the first month of this routine, so I don’t really get it. I was all ready to come on here and sing the praises!

All in all, I like the new skin care routine and have high hopes for it, so I’m willing to just place my bets that it’s an internal thing and just keep the external skin care the same for now.

So What Are You Going to Do?

Of course I don’t want to break out, and I don’t really want to have to do anything or change anything to make it go away.

I’d rather be lazy. Lazy with perfectly clear skin, that is.

But that’s not what’s happening, so I accept it.

Accepting it helped me not do anything rash or freak out (and made this whole experience soooo much easier). I contemplated for a bit and then decided that I was going to do a candida cleanse to rebalance everything.

If you’re not familiar with what that is, it’s a completely no sugar diet (including natural sugars), in which you also take natural supplements to kill yeast (referred to as candida) and bad bacteria that might be in your gut, while repopulating it with good bacteria.

Definitely challenging, but I have done a few of them before (three weeks each), and I have always found them extremely effective for my skin and acne. So much so, that I have even made a whole candida cleanse program so others could try it too (only available as part of the Naturally Clear Skin Academy now).

I have always thought that if for some reason I ever got severe acne again, this would be the very first thing I would do.

And I also highly recommend to most people to try this at least once as part of a larger lifestyle change, especially if you really, really like sugar, have been on antibiotics in the past, or if your acne is also accompanied by rashes or yeast infections.

So what’s why I figured… Ok. We’ll try that.

I have thought for years that I should do one again just to get everything back on track … sometimes you just need that kick in the pants, right?

So, a little ironic that after I recently started banging on about how emotionally addicted I am to Estroblock, because it works so well… … and then suddenly it doesn’t seem to be working that well anymore, does it?

Disappointing, but I am surprisingly feeling quite calm about it.

I’ve decided now would be a good time to take a break from it (and Thorne SAT just because I consider them a pair), and use this opportunity to try out some other acne supplements that I have heard so much about but never tried.

If I’ve finally become immune to Estroblock’s charms, at least I know I can just take a break from it and go back to it in the future if I want or need to (assuming its effectiveness will be restored).

Anyway – so aside from the probiotics, antifungals, and psyllium husk that are specific to my candida cleanse, I have also decided to try berberine, zinc, and curcumin (also known as the active compound in the yellow spice turmeric). 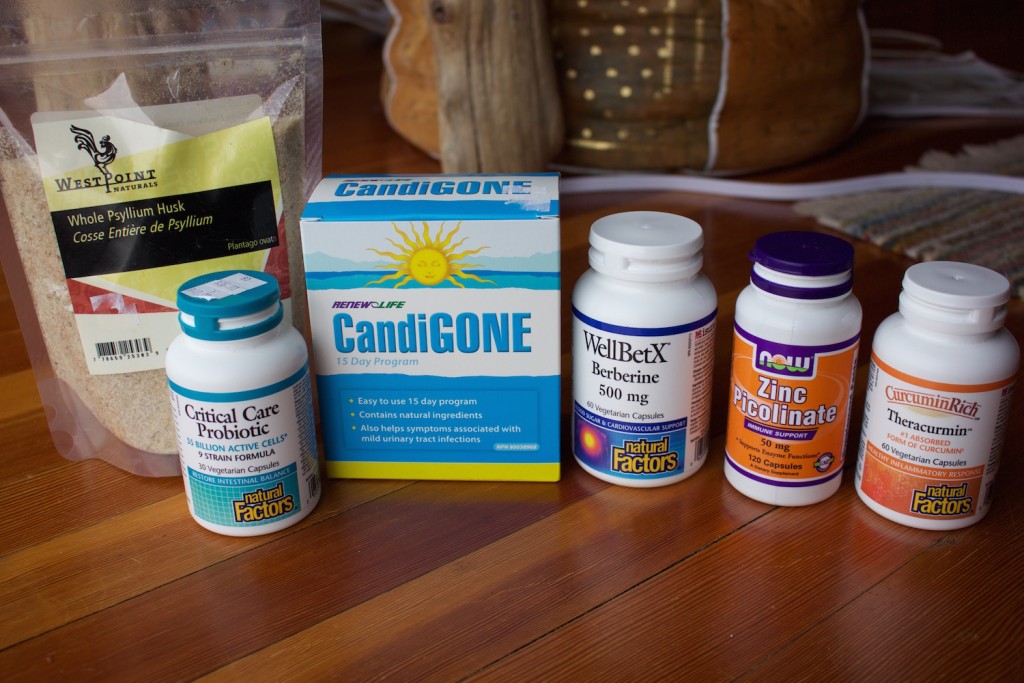 I’ll talk about these in their own posts later on, although berberine already has it’s own excellent Love Vitamin post which you can read here.

Anyway – so that’s what I’ve decided to do!

I’ve actually already been on the candida cleanse and new supplements for a little over a week now (and off Estroblock & Thorne), and it’s going really well.

I haven’t even been finding it that hard, which is awesome! (well, we’ll see what I say after another two weeks…)

My skin has also already cleared up and has been really good all week, but it basically cleared up on the first day, so I assume this is just my “clear time”.

I can’t exactly attribute it to the cleanse or the supps yet, and can’t consider myself out of the water until my next skin “off period”. So we shall see! I’ll keep you posted!