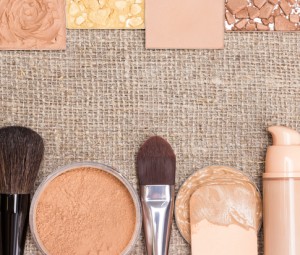 So, you know me… I’m all for natural acne and skin solutions that are healthy options for the long term.

Solutions that aren’t short sighted, and won’t cause more damage or problems in the future in favour of a quick fix in the present.

But there is one final frontier that I have yet to really conquer….

And that is switching to natural makeup.

Yes… I Know Better, But…

Sure, I KNOW that all the chemicals in makeup aren’t good for you and that I really should make the effort to find good, all natural, safe makeup options.

And I KNOW that most of them are probably damaging to skin and pore clogging.

And I KNOW that by not switching, I am not staying true to my ethos.

But Let me ‘Splain my Excuses…

When I first started wearing makeup when I was in middle school, I found the concealer I liked (Maybelline Shine Free something or other), and I found the mascara I liked (Cover Girl waterproof lash blast something)…

And then every single time I decided to try a new makeup, it either just wasn’t thick enough and didn’t cover spots well, or the colour was off… and with mascara, it was too flakey or runny, or some other issue…

So after enough failed tries, I just gave up.

I dug my feet in and stuck with those two products for a good 12 years.

Right up until the Shine Free one got discontinued (to my dismay) and had to switch to a new Maybelline product (Fit Me concealer in the little tube).

Which turned out to be even better… the coverage of any spots was just as good, but mainly because I finally realized I had a very yellow skin tone and had been wearing the wrong colour my whole Maybelline Shine Free life… oy vey…

Let Me ‘Splain Even More Excuses…

But anyway.. I’ve justified all this because I wear very minimal makeup – I only wear concealer on spots (which are now very limited) and under my eyes. Along with a bit of mascara. I’ve never liked wearing full coverage foundations or powders.

I always told myself that if I was a full coverage wearer, then surely I would make the effort to figure it all out and switch.

Because then there would be more surface area for chemical absorption, more clog and skin damage potential, etc…

But the truth is…. trying to find a new makeup that you like (especially one that doesn’t break you out and is healthy and natural) is just confusing, annoying, and expensive.

How many are you going to have to try before you hit on a winner, ya know?

I was also never really sure how bad chemical makeup really was in terms of acne. What’s worse? Makeup, or the stress from not wearing it?

So I’ve sort of just shied away from it all and have avoided giving any strong recommendations makeup wise, and instead have let Love Vitamin readers take advice from each other on what to try.

Then Melissa Came Along

Then Melissa Armstrong came along to my Naturally Clear Skin Academy forums.

She turned away from the conventional skin care industry because she realized how the entire industry is based on lies and mistruths that were harming people.

She now runs her own natural skin care clinic in Illinois and gets amazing results for her clients. She is also an ingredients expert, and knows a TON about the chemicals in various products and how they affect the skin.

So I’ve learned a lot from her, especially in terms of makeup.

And it turns out that, yeah.. some of the chemicals that are used in most makeups can really damage the skin.

They can lead to, in the long run, a lot of damage to the skin’s collagen structure, uneven skin tone and redness, trapped inflammation, skin sensitivity, and what she calls “pore scarring”. Even if the makeup claims to be non-comedogenic.

They also prevent your skin from knowing how to properly renew and regenerate itself, which is, of course, a problem when clear skin is your goal.

So yes… I guess that it is worth the trouble of finding a natural, safe makeup.

Figuring out what that is though is the tricky part.

Makeups That Get the Green Light Chemical Wise…

From a healthy ingredients perspective, Melissa gave the green light on the following makeup brands which don’t contain any (or at least most) of the harmful chemicals that need to be avoided:

Juice Beauty and Real Purity… and then Fit Glow Beauty, with Mineral Fusion as close runner ups. And as a sunscreen, one called Suntegrity.

So I decided to take the plunge and I ordered:

I didn’t really like the concealer from Real Purity. I didn’t think it covered that well, and it only came in two shades… neither of which were for people with a yellow skin tone. So it didn’t work for me.

However, I was pretty impressed with the one from Juice Beauty (when I finally got the right colour for me after ordering the wrong one initially; certainly a problem with buying makeup online).

The coverage of spots was pretty darn good. Maybe not QUITE as good as my Maybelline Fit Me concealer (or have as much staying power) but certainly not too shabby. And it works perfectly for an under eye concealer.

The foundation from Juice Beauty I only ordered because I figured some of you may want a review, but when I received it in the mail, I realized that I didn’t know anything about foundation.

Since I have never been a foundation wearer I was lost on what to say about it. What could I say if I had nothing to compare it to?

So I never even tried it…

Real Purity Mascara for the Win!

And as for the mascaras… they were both pretty good, but I really like the one from Real Purity. I didn’t have high hopes for a natural mascara, but honestly.. it’s easy to apply and it looks great!

I don’t find it to be particularly runny or smudgy or hard to put on… occasionally it will flake a little, but overall it’s great. It’s definitely a keeper!

So overall, with my first foray into natural makeup… I was impressed.

And I was stoked to tell the blog!

Until the Ball Dropped

Then I rechecked the ingredients and realized something:

The main ingredient in the concealer from Juice Beauty is coconut oil!! AGGGH.

The same thing happened when I tried the Suntegrity tinted moisturizer sunscreen.

I have always used a natural sunscreen (which doesn’t appear to have any problematic ingredients), but the one I use is only made and sold locally so I wanted to try something that I could recommend to the blog and was widely available.

I had never really tried a tinted moisturizer/sunscreen before, but then the first time I tried this on, I was like DANG! I look good! Let’s keep this going!

And then I looked at the ingredients again and saw that one of the top ingredients is capric/caprylic triglycerides which, as far as I know, is basically coconut oil.

And after looking at the other brands of natural makeups, so many of them have coconut ingredients in them too.

*stomps around in frustration*

Coconut Oil… Not So Great for the Face…

Using coconut oil on the face is one of those things that is highly debated on as to whether it causes acne or not, and of course it’s always an individual thing. It doesn’t necessarily mean these products will definitely break you out.

But I do know it gives a lot of people trouble and isn’t something to just mess around with. It has a rating of 4 to 5 on the comedogenic scale (which is high).

So that was a big lesson…. natural and safe doesn’t always mean it’s going to be a good recommendation for acne specifically (unless I’m totally misunderstanding something here… maybe Melissa will chime in!)

I mean, maybe these makeups / sunscreens won’t cause any problems… I’ve actually still been using them intermittently, but I just feel uneasy about enthusiastically recommending them at this point.

So yep. Back to square one.

Well, I guess nearly back to square one. I am very stoked to at least have some natural, safe mascara and concealer to use around my eyes. I don’t want to be inviting wrinkles any faster than fate allows.

And for the time being… well, I’m back to my Maybelline Fit Me… for now…

Next week, we’ll talk more about makeup and what it does to your skin, and what harmful ingredients should be avoided (or at least what I’ve learned so far).

We’ll also soon be talking about what’s next in my natural makeup and sunscreen adventures. Which at the moment, seems to be an attempt to make my own (I just ordered a huge batch of ingredients to try and make a tinted sunscreen moisturizer).

I figure if no one can do it right, then may as well (try to) do it yourself!

Stay tuned! Also, please share in the comments any thoughts you have on this topic!