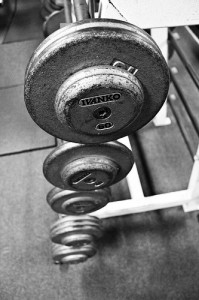 This is the very first episode of Monday Q&As with Tracy… I hope everyone whose questions these are are okay with me using them. For future reference, I will never use names in this and leave the questions anonymous to protect privacy 🙂

Do Intense Workouts Cause Acne?

I work out 5 times a week and afterwards consume protein shakes, obviously these shakes aren’t natural.

How will this affect my progress with my acne?

Also does working out 5 times a week for an hour affect acne? I would assume so because of the increased testosterone/hormonal imbalances, but I would like to hear your opinion.

What are the protein shakes made out of? A lot of them do have questionable ingredients, and many people apparently have found an increase in acne while taking creatine. There is a vegan protein powder that seems quite good called Vega Whole Food Health Optimizer, and it doesn’t have any weird stuff in it, plus lots of vitamins and minerals… look into it. I’ve used it before, it’s good stuff, and you can throw it into your green smoothies.

As for the working out…. yes I have heard that very intense workouts can raise testosterone levels, which can then convert to DHT, a potent androgen (sex hormone) which is responsible for oil production and linked heavily to acne in acne prone individuals.

So… I don’t know what to tell you about it, since I’m sure that bodybuilding is important to you. It’s up to you I suppose! Maybe just switch up your protein shake, give my program a try and if after a couple months, it’s still not improving much, then perhaps the working out is a problem.

Note to everyone: I highly recommend exercise for acne and overall health. I’m referring here only to like… super duper intense stuff.

Is Dietary Yeast Bad for the Skin?

I have recently purchased your e-book, and I learned some new things that I have incorporated into my already quite healthy diet.

After reading your book, I just wanted to know for sure–is eating yeast bad for your skin? Your book suggests that it might be bad, but it is unclear.

The reason I ask is because I used to eat one slice of gluten-free bread (sweetened only with fruit juice and contains yeast!) everyday with my lunch, including a salad and a piece of raw milk cheese.

I have stopped eating the gluten-free bread and the raw milk cheese since reading your e-book, and I was wondering if getting off both is necessary to achieve the clearest skin possible. (I am also following all of your advice about eating only whole foods in their natural state.)

Thanks for your help!

Sorry I was unclear about the yeast… it’s not necessarily bad unless you are allergic to it. But it’s a fairly common allergen and it’s also been known to encourage candida yeast to grow in some people. So… unfortunately the answer is ‘it depends’.

Maybe cut that and the cheese out for a couple weeks and monitor your skin closely and if it doesn’t make a difference, then go ahead and have it. It’s only one slice anyway.

The annoying thing is that everyone reacts to foods so differently… so, for example, if you were REALLY sensitive to dairy, then maybe raw milk cheese would cause you problems. But in general, I wouldn’t think it would for most, especially if you only have a little bit of it.

So yeah, just cut it it out for a little bit, if it doesn’t make a difference, go ahead and have it!

Is Acid Reflux Medication Preventing Me from Getting Rid of Acne? + Question About Food Combining

I downloaded your new book and have really enjoyed reading it!

I have one question about the digestion part of the book. You explain that most people with heartburn actually suffer from not having enough stomach acid. About 6 years ago, at the beginning of my acne breakouts, I had started having severe heartburn. From there, my digestion got worse as did my acne.

Last year, I was in and out of the ER with severe sharp stomach pains. After multiple tests, the doctors diagnosed me with having acid reflux, esophagitis and gastroparesis (delayed emptying of the stomach). I was prescribed a new pill for each diagnoses but decided to take a more natural approach to get to the root of the problem and actually cure my digestive tract (although the doctors had told me I would need to be on pills for the rest of my life.. figures).

From there, I started seeking advice from a natural pharmacists who told me to cut out gluten and who got me started on the Pearls probiotics and some high quality digestive enzymes. Anyways.. I’ve been off birth control for over a year now (unfortunately making my acne a little worse), have cut out all prescription drugs and medications except for my acid reflux medicine, Dexilant. I’ve tried over and over to cut it out of my daily routine by eating well, starting the day with lemon water, consuming alkaline filled produce foods and doing yoga to reduce stress.

Could the acid reflux medicine be keeping me from completely healing? It would essentially be lowering my HCL, right? Which would be bad.. but to go without it is quite painful. I’ve tried multiple times to heal my digestion by eating soups and taking probiotics. In the past, my bread and sugar cravings have gotten the best of me and as soon as I start to feel better, I cheat with my otherwise healthy diet.

One more question.. I’ve been told by acupuncturists and the natural pharmacists to never combine fruit with anything because the enzymes get all mixed up in your stomach. Is this true? I’ve been making a lot of green smoothies lately and my belly has had some trouble adjusting. It gets all rumbly and is sometimes in pain. I usually don’t mix food enzymes (you know.. no protein with carbs, fruit by itself) but don’t know if it’s just an old holistic belief. Thanks again for the book and for all of the valuable information on your blog! You’ve been so helpful!!

I do suspect the reason you probably have acne is due to the low amount of stomach acid… although I’m not an expert, what I know is that PPIs (proton pump inhibitors) like Dexilant stop your body from secreting HCL so that it can’t splash up and hurt your esophogus, right? So yes, if it is preventing you from creating HCL, then you really aren’t digesting your food well, and that sets the stage for all sorts of problems since digesting food in the stomach is the first stop in the whole process. And yeah… you won’t be able to really heal until you get off them.

Plus PPIs can be dangerous and cause a whole host of problems…. I can tell you want to get off them, so I don’t know what to say :/ I can imagine that trying to go off them creates some kind of intense rebound effect with the acid reflux, and I’m not sure at this time how you should deal with that. I’m not sure what form you take them in… is it like a capsule? or a tablet? or…. would there be any way to slowly wean yourself off them (like perhaps by cutting the tablet with a razor or something?).

Also, I’m not really sure about when exactly would be the best time to add in taking HCL betaine tablets… probably not until you’re fully off the PPIs and I’m not sure if taking them right away afterwards is a good idea. You may have to do some research on the subject because I dont feel qualified to say. … read around about how others have managed to quit drugs like Dexilant, and please visit a naturopath to help you.

As for the food combining stuff….

[Note: If you don’t know what food combining is, it’s a theory that your body only secretes certain digestive enzymes at a time, so if you eat proteins and starchy carbohydrates together, your body will get confused and not digest it properly, so it’s best to eat these things apart. Another part of it is eating fruit alone or only with vegetables, because fruit digests so much quicker than other foods, and if you eat it with other things, supposedly it ends up getting held back in the digestive process rotting and fermenting and therefore, feeds the bad bacteria in your guts]

it’s one of those things I’ve never written about because I simply don’t know what the truth is. One person says this, the next person says it’s a myth…. I don’t know. I would imagine it’s best to just do what your body feels… I figure if you have a weak digestive system, it’s more likely that your body is not going to like complicated meals. Many people do say they feel better if they keep proteins, starchy carbs, and fruits apart, but I suspect it again could be a low stomach acid issue that is actually the culprit.

Anyway… for most people, the most common bad combination is fruit combined with other things, particularly fruit combined with starches and proteins. In the past, I have usually tried to eat fruit alone, or only with vegetables (I almost always read that fruit is fine to eat with vegetables, but nothing else)… recently I’ve started eating fruit in my salads with meat and other things, and it’s hard to say… is that a bad idea? Are they just trying to scare me into not doing it? I’m not sure. I’m enjoying it though.

Anyway… as for the last question, sometimes it does take my system a while to get used to having the green smoothies too, as it can stir up toxins in the intestines and give you some detox symptoms. I’d suggest maybe adding a teaspoonful of psyllium husk or ground flax seed to them (start with just a small amount and work your way up), and drink lots of water which will help to flush out your intestines.