Sunscreen Breaking You Out? Internal Sunscreen Could Be The Answer 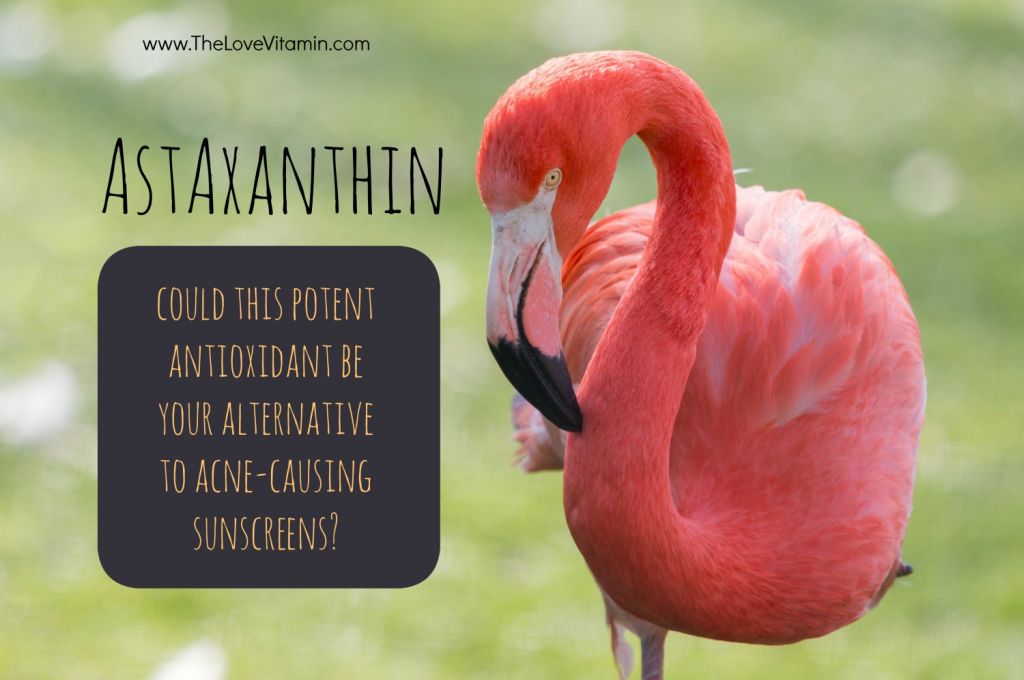 So, as you may know, a couple weeks ago, we were talking about sunscreen.

And how it’s, like, pretty damn nearly impossible to find a really clean, super acne-friendly sunscreen.

Unless you want to spend $85 US on the loveliness that is Josh Rosebrook Nutrient Day Cream.

I did find a few decent options, for less money. Moogoo. Badger. Babo. Live Live. None of them are as perfect as I want though. Except ol’ Joshy boy. But he’s pricey.

So anyway, there is another alternative to explore. And that’s internal sunscreen.

Namely, it’s the supplement called astaxanthin… I can NEVER remember which order the s or the x or the th go in. Ast-ax-an-thin. Say that five times fast. I dare you.

It’s actually the pink pigment in salmon, and in shrimp, and also why flamingos are pink because they eat the shrimp… and then, well, somehow this magical pinkness protects from the blazing desert sun. The magical shrimp sunscreen.

So anyway – here’s the deal. When the sun hits you, the rays create free radicals in your skin.

Free radicals are the actual things that damage your cells and create skin cancer and visible aging.

And experts also think they are a big culprit behind heart disease and immuno issues and joint pain and basically everything bad that could happen to you as you get older. Free radicals are not good.

However, antioxidants are the superheroes that come along and kick those free radicals out of town before they can damage your skin and body.

Luckily, antioxidants are found all throughout a healthy diet. They are most abundant in fruits and vegetables and leafy greens. So if you’re a healthy Love Vitamin gal then you’ve got a head start!

I know that for me personally, after I adopted a healthy lifestyle in order to clear my skin, I did notice that it look much longer for me to get a sunburn.

So there. It works!

So taking astaxanthin is basically the same deal, but on supercharge because it’s such a powerful, concentrated antioxidant. It will give you an even bigger sun protection boost to your already anti-oxidant packed diet.

Sun rays come in… this baby neutralizes them. Zap!

But of course the benefits of astaxanthin don’t stop there. Since free radicals damage all the cells in your body, taking astaxanthin can be a huge overall health boost.

Let’s first look at the benefits for the skin itself:

Sooo… pretty good right? It sounded good enough that I decided to start taking it.

I’ve been taking it for about two months now.

I mean, I can’t really tell you how the anti-aging and cancer/everything prevention is… there’s no way to see a side by side comparison of how things would have turned out for me in ten year’s time, with and without astaxanthin.

And yeah, I think perhaps my skin has a nice pinky glow to it. Like a glistening salmon, maybe.

One thing I have not had the entire time I’ve been taking it is a pimple. Like not even the hint of a small one. My skin is generally pretty good, but it’s been exceptionally good.

Usually I will get one or two very small ones over a month, enough that most mornings I will put a tiny dab of concealer here or there to cover a faint red mark left behind. It’s really not a big deal at all…

But over the last two months??

Nothing. I ONLY put concealer under my eyes now. Which is amazing.

I didn’t think much of it and assumed it was a coincidence. Because tbh – I only found out it was a 5-alpha-reductase inhibitor when writing this article.

So maybe astaxanthin is indeed an acne fighting angel as well! A multi-tasker for the ages.

Anyway — if all this good stuff is to be believed, I would say this could definitely replace your daily sunscreen application.

No muss, no fuss, no worries about thick, goopy, white, potentially acne-causing sunscreen and no reapplications!

Whether you can get away with an entire day at the beach and no topical sunscreen, I don’t know yet. That’s your call.

I haven’t tested it that extensively myself, but a lot of the reviews on Amazon suggest you can go at least a couple hours in blazing sun without it.

I imagine the reality depends how hot the sun is, what time of day you are out in it, and how easily you normally burn.

How to Take Astaxanthin Supplements

So.. I’ve determined the following:

Unfortunately it also isn’t the cheapest supplement out there… but.. that’s how it goes. The one per day formula has 50 pills in it (a weird number if you ask me), and runs at about $30 USD. So about $18 for a month’s supply.

And be careful if you’re a dude… inhibiting DHT usually doesn’t have negative side effects for women, but for some men it can cause low libido and other problems. You’ll sometimes read that astaxanthin can cause unspecified “hormonal changes” and I believe this is what that is referring to.

Anyway, I haven’t had any negative side effects at all, but that’s just me.

Now excuse me while I go lounge in my undies on my deck chair! Peace!

What do you think about astaxanthin? Are you sick of external sunscreen and willing to give it a try?