Is the Comedogenic Scale All It’s Cracked Up to Be? 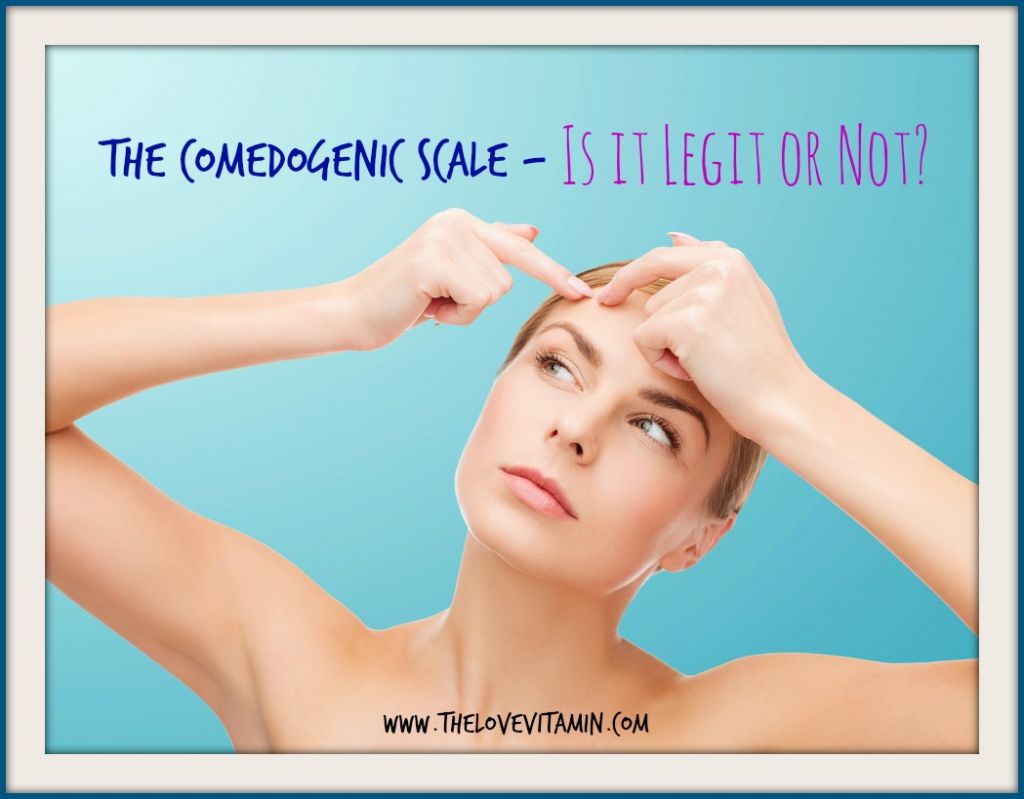 As acne prone people, the last thing we ever want to do is put something on our face that can cause acne or clog the pores.

And it’s not just synthetic chemicals that can do that… some natural substances can as well.

And that’s why we have this handy dandy tool called the comedogenic scale.

What Is the Comedogenic Scale?

First of all, comedogenic means that a given substance, when applied to the skin, will create a “comedone” in the pore.

In plain English, it means it clogged it. And, of course, clogged pores can then lead to acne.

Now, the comedogenic scale is simply a scale of 0 – 5 in which a given substance is rated on how likely it is to clog your pores.

There are different iterations of this list of comedogenic ratings around the internet. You may have seen them already. Here’s an example.

Using this handy list, you are now able to check which ingredients you are considering putting on your skin, and determine with (what you assume to be) cutting accuracy on whether your skin will come out lovely or worse than a pepperoni pizza.

But… the question is… what are these lists really based off? What science experiment determined what was comedogenic or not?

And more importantly, how accurate is it? Should the list be your holy grail or not?

So the comedogenic scale is determined by applying substances in large amounts to rabbit’s ears. Rabbit’s ears are sensitive and, well, I guess pretty prone to comedones.

How quickly and how large the comedones form is what determines the rating on the scale.

So first thing to keep in mind is that the skin they test is not actually human skin.

And even if it were, it would have to be a huge sample size because people have very different skin that acts very differently from one another. But even then, it would very hard to control for all variables.

So right away, it can be taken with a grain of salt.

Secondly, you are rarely applying a liberal amount of any one substance to your skin. Sometimes you are if you are using a straight oil to moisturize, but more likely the substance is part of a formulated product in which it is just one of many.

This, of course, changes things.

Substances act very differently when they are exposed to and combined with other ingredients. After all, a cake rarely resembles anything close to eggs, butter, and sugar in their individual forms.

For example, did you know that literally anything can kill you if it’s ingested in high enough quantities? Water, salt. Heck, even blueberries.

Of course, it’s going to take a lot more blueberries to kill you than, say, a drink of cyanide. But it still will eventually. The point is: the poison is in the dose.

So something that is quite comedogenic used on it’s own in larger amounts, may be completely fine when combined with other substances and diluted down within a product formula.

So, Do I Trust This Scale or Not?

Well, I don’t think it’s the be all and end all. But I think it’s a helpful guideline, and I admit that I use it to help determine what products I am willing to recommend to you.

I would rather err on the side of caution, for the most part. I prefer recommending products that are largely free of highly comedogenic ingredients.

But, that can be a difficult and fruitless journey sometimes, since I am also determined to recommend products that are largely free of synthetic ingredients.

My feelings are that even though certain natural botanical ingredients may be pegged high on the comedogenic scale, many still have redeeming qualities that contribute to skin health in other ways.

Synthetic ingredients, on the other hand, generally give nothing back, and many clog pores and harm your skin — even if they aren’t technically determined to be “comedogenic” on the rabbit’s ears.

So anyway — one trick I like to use is looking at the first third of the ingredients listed on a product. You may not be aware of this, but when ingredients are listed on skin care or in food, they are listed in order by quantity.

So, for example if the ingredients in something were listed as: Water, Sunshine, Flowers, Rainbows, Unicorns — then that means water has the highest quantity within the product.

Then comes sunshine, then flowers, then rainbows… but not many unicorns in there, unfortunately.

So when you’re looking at an ingredient list, if the first handful of ingredients are low on the comedogenic scale, then you’re probably looking good.

If you find a comedogenic ingredient sneaking in there, but it’s lower on the list (and the overall formula is largely free of synthetics)… then I would still give it a chance.

With synthetics, I don’t love them at the best of times, but similarly if they are snuck in at the very bottom of the list, it’s much more acceptable than being near the top or even the middle.

In the End, It’s Your Skin

In the end… the comedogenic scale is helpful, but it all depends on your own skin and how it reacts to things.

For example, coconut oil — an oil with a lot of different healthy properties — is rated a 4 on the comedogenic scale.

And although it’s perfectly fine to eat, it does indeed clog a lot of people’s pores when applied topically.

But there are a LOT of people, including acne prone people, who use it straight as a moisturizer and love it, and have absolutely no issue.

Furthermore, there’s a lot of people who break out from straight coconut oil, but if they use a product that contains it but it’s not in the top 3 or 4 ingredients, then they’re totally fine.

So my advice is to just use the scale as a helpful guideline, but don’t be afraid to step outside the lines a bit! The scale should definitely be used with a grain of salt.

The fact is, everyone’s skin is different, and your skin is essentially its own best comedogenic scale.

What are you thoughts on the comedogenic scale? Do you think it’s useful in determining what to use on your skin?

Hi friend, today we’re going to explore an effective, permanent method of acne scar removal. Called dermarolling. In which the tool you use soooorta looks like

Have Acne? Micellar Water is the Best Cleanser & Makeup Remover in One

Hey hey! Guess what? I have a pretty sweet new cleanser for you to try out if you have acne prone skin — it’s micellar

If you’ve been reading my blog for a while, you’ll probably know that I am a BIG advocate to leaving your skin alone. That means