The Results of my Hair Mineral Analysis Test 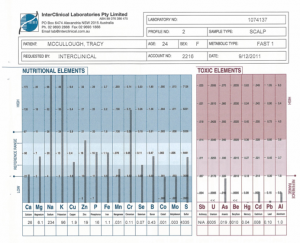 Last post, I told you all about hair mineral analysis, how it works, and where and how you can get this test done if you so choose.

I left you with a cliffhanger though on what kind of info my own test turned up, so here it is! The results of my hair mineral analysis and what I think about it:

Click Here to View my Graphs and Full Report

Now, I’d like to say that my results are not what I expected at all. I was SO convinced that my copper IUD was probably causing me to retain a lot of copper, causing a multitude of issues (including throwing my zinc off) that I was about ready to rip it out of my uterus right then and there.

The good news is that my copper and zinc levels are just fine. Yay! I don’t have to get rid of my IUD. Even just to know that makes having this test worth it for me.

I was also concerned about mercury because of my mercury filling, but my mercury seems to be very low, so that is also awesome!

So What’s the Problem Then?

Well the big thing with my results is that I am retaining huge amounts of sodium and potassium. This doesn’t mean that I simply eat too much salt, there is a reason my body is retaining all of it – a super high sodium level that is matched by potassium indicates that my adrenal glands and thyroid are overactive.

In plain english, this means: CHILL the f OUT!!!

Yes. The results are in – stress is an evil devil. I so didn’t want to believe that the way I’ve been feeling lately (ie. not good) is because of my own doing, but the test says it all – I’m stressing myself out and my body is responding negatively.

The test also told me that I have a fast metabolism. Pretty obvious, really – I don’t put on weight to save my life.

Characteristics typical of a fast metabolizer:

The thing I found the most interesting about this part was the decreased pancreatic activity and the hyper active stomach acid. The report goes onto explain that people with high sodium levels often have too much stomach acid because chloride is removed from sodium chloride to create it. Apparently this can lead to depletion of pancreatic enzymes, which then affects absorption and the integrity of the gut permeability.

So this makes sense. Low stomach acid is not my problem, but supplementing with digestive enzymes is probably a good idea. I found this information really helpful so that’s a plus 🙂

I’m still trying to process the idea of following the dietary suggestions. I don’t know if I’m going to or not. I eat close to how they describe anyway, but I’m just not finding myself able to wrap my head around cutting out staple vegetables like green beans, chard, eggplant, peppers, beets, and whatever else. So… I’m still “digesting” this, if you will, and I’m not sure where that will take me.

Although I’m still working out what I am going to do with this information, it has been really helpful to know. Things that I’ve come to realize thanks to this test are this:

I’m pretty resistant to reality. The truth is, I know there are areas I need to improve on that are completely within my power and it’s not necessarily to do with food (although it partly is). One is that since I’ve begun working from home, the amount of time I sit on my butt at my computer is having a really negative effect on me. Exercise is the biggest stress reliever, so no doubt I’m getting stressed out and cranky about everything. I was going to the gym, but then asbestos fell out of the roof and they closed the gym! So of course, now I just don’t go to the gym. I do yoga every day at home and walk sometimes, but still. Humans were designed to have short bursts of really intense activity every once in a while, and the rest of the time we are meant to just be moving around slowly. Humans weren’t designed to sit 22 hours of the day.

Also, because I don’t move much, I’m also not eating much either, so I’m probably not getting as many nutrients as I think I am. My blender also broke, so I stopped the green smoothies. Then I got a second hand one, and it’s the worst blender ever so I’m not keen to use it… I’m just not having blender luck, that’s for sure. I also get lazy about the variety in my food because I know there are certain things I can eat at the supermarket (organic chicken, kangaroo, vegetables) that is within our budget and convenient. I know I could do better – I’d be eating organ meats, grass fed beef, bone broth, raw milk kefir, nettles, and all sorts of super nutrient dense food if I wasn’t so lazy/had money issues (most of which are probably blown out of proportion by me). I know most of the laziness stems from feeling like “Whats the point in trying to source all this good food where I am when I’m leaving in two months. May as well save that effort for when I go back to Canada”. It’s a bad attitude.

Anyway… these lazy habits have slowly snuck up on me and I’ve failed to acknowledge how much things have slid in that department until now. And the more you let them slide, the more difficult it is to begin again (suddenly I remember how hard it was in the beginning to change to a healthy lifestyle…. laziness feeds laziness). However, I have ordered some grass fed beef, organ meats, and bones, as well as kefir grains and have possibly found a source for raw milk close to me. So… I’m working on it. Now to get to the exercise…

The biggest lesson that I have learned though is definitely that stress is playing such a huge factor in whatever is ailing me. I knew this deep down, but I guess I don’t trust my instincts enough. It is kind of nice having a concrete test to shout it in my face as a big fat reminder that if I just let go of my fear and control issues and be content with where I am, who I am, and what is, then maybe everything would be okay.

It’s funny because I’d been breaking out frequently before christmas, as well as having digestion issues every day no matter what I ate (which is frustrating), but when I went to Christmas with my boyfriend’s family, took a step back from my computer, gave myself permission to truly have a few days off and just enjoy the company, I didn’t break out at ALL. And my stomach didn’t hurt so much. It completely ceased. I wasn’t even washing my face the whole time, and no, I was not eating what I would consider to be ‘perfectly’. It’s so funny how that works, but it seems to be true for many people.

I think for the next while I really want to focus on articles and videos to do with stress relief, ways to be happy, spiritual development, and stuff that I am learning on my journey to contentedness. I often get so caught up in nutritional stuff that I forget how important these things are to me, to everyone, and to everyone’s skin and well being!

What do you think about hair mineral analysis? Intriguing?