What Are The Benefits Of Treating Your Acne Naturally? 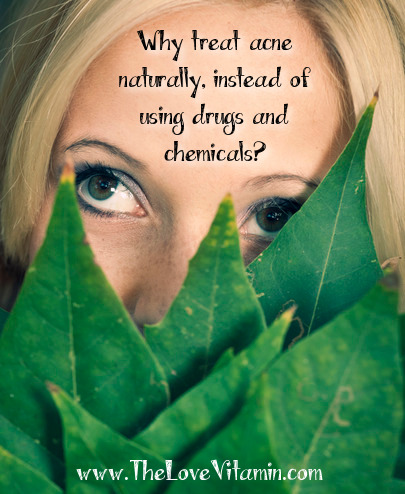 Why would someone choose to forgo conventional acne treatments for a more natural approach? You’d think taking Accutane or some other strong chemical would be a lot easier, especially if your acne is anywhere near as bad as mine was.

I was introduced to natural and holistic healing for the first time about four years ago when my acne was less intense. Despite it being mild most of the time, it would still go through phases when it became worse than usual. I’d start coming down with quite a few of those sore, under the skin kind of spots – mostly around my chin – and I’d start to get frustrated.

I was using benzoyl peroxide night and day. I don’t know how effective it really was, because I still had acne. I guess I just assumed that if I wasn’t using it, it would be a lot worse.

So, because I was already using a conventional acne treatment and it wasn’t working, I felt like I needed other answers. There had to be a better way!

I felt stuck… I was too embarrassed to see the doctor – putting it in perspective, I felt like it was not bad enough to warrant a visit. That made it worse since I felt ashamed about how much it truly bothered me. But there just had to be something else I could do!

And when I want to know something in the privacy of my own home… there’s always our trusty pal, the internet.

To be honest, I had never given much thought at all to how I lived my lifestyle and whether it was healthy or not and how that would affect something like my skin.

All you hear from anyone is that acne is from sebum and blocked pores, so wash your face and it’ll be A-okay. This is such a narrow and simplistic view of a disease like this, but extremely congruent with western medical dogma. But I didn’t know any better, so I washed my face religiously, slapped on my benzoyl, and ate whatever I wanted and never exercised.

However, in my travels across the internet, and the purchase of my first acne ebook, the power of diet and its affects on acne came to my attention. I was very resistant to it at first… give up sugar? Deep fried foods? Having to THINK about my diet? What?

But I figured that giving it a try wouldn’t be that terrible, so I gave it a go. I did a Candida style cleanse for three weeks, and thus I embarked on my first semblance of natural healing. And what do you know, the acne on my chin cleared right up and stayed clear for quite some time afterwards, despite me quickly slipping into my old habits.

Well, I was sold, or at least I now had some experience with the power of nature. After a year or more of old habits, the acne on my chin began to emerge again, and so I bought a new ebook, took a new approach, and within a couple months, my skin was clear again and stayed clear for some time. Again… I quickly fell into my old habits until our old friend, acne vulgaris, creeped up on me yet again.

This time, at the turn of 2010, my lifestyle was especially bad… I was working in a pub, stressed every night from waiting tables, sleeping terrible hours, drinking a lot, gulping down pub food on my rushed breaks, and dealing with a difficult relationship.

Benzoyl didn’t seem to be working, so I ditched it, and began frantically searching for a new product to take its place. I even went to the doctor this time, but hummed and hawed about the birth control pills and bottle of Differin that he gave me, as I just couldn’t wrap myself around the idea of dealing with the side effects from these drugs. I ended up not using them, and continued with other various over-the-counters.

The combination of everything going on in my life at that time culminated in a very sudden and severe acne attack, much worse than ever before. I couldn’t even believe it.

It started on my forehead… I woke up one day with more zits than I had ever had there. Then it seemed to spread all the way down my face until it was hardly a shadow of its former self, getting worse and worse and worse with each passing week.

I cursed myself for ever having fretted over my mild acne. I had never liked it, but I still had it vaguely in perspective – I’d see people with severe acne and thank my stars that I didn’t have it that bad. How could this be happening to me?! I was suddenly trapped in my own personal nightmare.

However, I knew what needed to be done. I knew the holistic approach worked, as I had seen it myself. I knew my lifestyle was bad, but it can be difficult to get the motivation to change, especially if your unhealthy lifestyle is intertwined with your job and your friends.

I began taking supplements in vain, hoping to still take the easy way out, still hoping for that magic pill. After realizing that that wasn’t going to work, eventually I decided to get down to business and be serious about putting all the elements of health into place. Within four months or so after getting gung ho into the natural side of life, my skin had dramatically improved, as I knew that it would.

I have to admit, it wasn’t an easy road – I made many mistakes that I would avoid if I were to do it all over again. But you know what? These are all just hurdles in the story of our lives. I worked through them and learned lessons.

Was it easier than Accutane? No.

Was it worth it? Definitely.

Hey! If you liked this article, leave a comment below and tell me why you are fed up with conventional treatments and are ready to go natural!