Is Butter Good For You? You May Be Surprised! 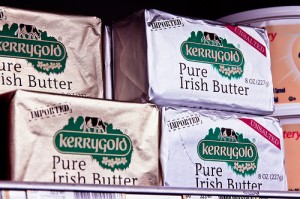 In my last post, I went over all the little details about eating and choosing the best dairy products.

As we discussed in that article, most of the problem with dairy products and acne comes from:

Today we’re going to expand on the topic of butter, because it is essentially a dairy product. However, it’s a bit special – which is a good thing because it’s just so darn delicious!

Why is it special? Because it is mostly just the milk fat, with only trace amounts of lactose and protein, meaning it doesn’t cause problems for most people.

And if you are skeptical and don’t trust me, you can always buy something called ghee, which is a clarified butter popular in Indian cooking. By clarified, I mean that the protein and lactose have been cooked off, leaving true, pure butter fat.

You can also make ghee at home by clarifying your own butter! Click here for instructions.

But anyway… lactose and protein aside, there are still problems with conventional butter because animals concentrate toxins in their fat, which means you are still getting those pesky added hormones. So at the very least, you want to be eating organic butter.

But organic isn’t going to cut it if you want to eat butter for its health benefits – yes, that’s right – butter has some amazing health benefits (hallelujah). If that is the case, you need to get grass fed.

It’s like what I was talking about last post with the fermented dairy – if you are looking to eat milk kefir only because you want an amazing health tonic, it’s best you seek out raw milk to make it. However, if you just want to know what’s going to harm you the least because you don’t want to give up your yogurt, then organic pasteurized will probably do you fine.

As much as butter is sort of renowned as one of those foods that you make jokes about because everyone “knows” it’s unhealthy, it’s actually not. It’s nutritious.

Butter is good for you. Seriously.

If the cow was fed healthy green grass like it was supposed to, the butter has a ton of nutrients in it. It contains:

Contrary to popular belief, saturated fat from a clean source is not bad for you. It’s a good, stable fat that is worlds ahead of damaged vegetable oils like canola, soybean, etc, in terms of health. It’s never really been proven that saturated fat is harmful, and many of the studies that suggested it have been discredited. But it’s hard to get people to really believe it since its “badness” has been so firmly entrenched in the imaginations of the public over the last however many years.

Go and throw your hydrogenated chemical cesspool that is margarine away and go get yourself some butter.

Where Do I Get Grassfed Butter?

Well, first you get your bucket, and you go out and milk your cow. Then you put it in your butter churn…

Just kidding, you just go to Trader Joe’s. There is an awesome brand of grass fed butter available there called Kerry Gold (it’s from Ireland!). Or you can just get on Amazon and order some.

Seriously, you guys in the States don’t know how good you have it with being able to order anything you fancy on Amazon.com…  and also Trader Joe’s… I’m completely jealous! For the life of me, I cannot find grass fed butter in Canada, and have to settle for only organic. I once had Kerry Gold when I was actually in Ireland, but I was not such a butter connoisseur at the time, I didn’t quite appreciate it!