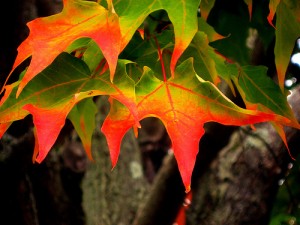 I’m in a big state of change, yet again.

Luke and I have just come back to Canada after spending six months living in Australia visiting with his family and attempting to pay off debts. If you’ve been following my blog for a while, you might have remembered that I was having a bit of a rough time when I first arrived there.

I move a lot. In the last six or seven years, eight months is the longest I’ve stayed in one house, and four or five is more of an average. I used to embrace this change and find it exciting. Now I can’t stand it. I’m sick of the routine of looking for a place to live, packing up, unpacking, getting used to the wall colour, the roommates, figuring out what items are missing from our collection of “stuff ” and buying them (moving is expensive!).

For about three months, I felt like I was spiralling out. I was having a really hard time. I was feeling lonely, and very discontented. At first I didn’t understand that this was just stress from moving so much, and was just blaming others and the situation for my unhappiness (because I wasn’t in control of it). I did end up realizing it was not the situation’s fault, it was merely my reaction to it. However, I still felt that whatever was ailing me was here to stay and that unless I did something about it, it would be permanent (that’s kinda daunting, isn’t it?).

But luckily, I snapped out of it. There’s nothing else to say except that I simply got used to things. I felt so much better the last three months I was there.

But here I am again… moving. Living with my parents, feeling lazy about diet and exercise and making videos for the blog, simply because I feel like I can’t function my best in a space that is not “mine”. Trying to find a house that meets all our standards (privacy, nature, cute, cheap, central, gardens) so that we actually want to stay there a while. My mind overwhelmed thinking of all the expenditures that we need to expend in the next few months before we can just settle into domestic and financial equilibrium.

Luckily we did just find a cute one bedroom cottage that satisfied all our specifications, so at least that’s settled! But now I can’t wait another two weeks to move into it, get settled, and start onto the GAPS diet! Oh yeah, have I ever mentioned I’m very impatient, which probably doesn’t help this matter of feeling like I’m out to sea when in transition? When I want something, I want it, like, yesterday.

Anyway, I can feel myself starting on my little downward spiral again, but I’m trying to remind myself of my personal lesson from Australia: Okay, so you don’t deal with change well anymore. But you get over it. It ain’t permanent.

Do you remember a couple weeks ago when I was freaking out about giving up all skin makeup? And that I said that hopefully not wearing makeup would eventually become my “norm” and wouldn’t bother me anymore?

Well, guess what – it’s happened! I’ve just gotten used to it, and now I wear no makeup at all aside from a touch of mascara and it doesn’t cause me any anxiety at all. It’s fantastically lazy deliciousness 🙂

Do you deal with change well? Do you thrive on it, or does it rattle you to your soul?