What is the Weston A. Price Foundation and Why Do I Listen to Them? 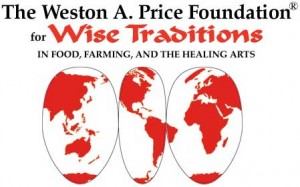 You may have heard me mention the Weston A. Price Foundation before, but I’ve never really explained who this guy was, what the foundation is about, and why I listen to them.

Okay, so here it is:

Who Was Weston A. Price?

Weston A. Price was a dentist from Ohio, who in the 1930s set out on a mission to find the reason behind all the dental decay and physical degeneration he was seeing in his dental practice. With every generation that was coming through his office, each subsequent one seemed to have more cavities and more dental problems than the generation before. This included crowded teeth and a too-narrow bridge, accompanied by increases in allergies, fatigue, behaviour problems, asthma, and skin issues.

Instead of looking to mainstream science for answers, he decided to look for evidence amongst real people who were free from industrialized influences – in other words, isolated human groups. He traveled extensively, studying groups in Switzerland, Ireland, the Arctic, North America, Melanesia, Polynesia, Africa, Australia, New Zealand, and South America.

Everywhere he went, he found beautiful straight teeth that were free from decay, strong bodies, and resistance to disease. All the diseases and health issues that plagued westerners were completely unknown among these completely separate and varied societies. This includes acne, eczema, dental cavities, cancer, heart disease, mental and emotional problems, osteoperosis, diabetes, and the list goes on.

I say that again – all of these completely separate and varied societies had radiant health and were free from degenerative disease. Not only that but they all seemed very happy and lacked any mental or emotional problems.

However, he found that within only ONE generation after modern foods were introduced, signs of physical decay began to show – hints of our western plagues were cropping up and he noticed that the younger generation was displaying a too narrow bone structure in which there was not enough room for all the teeth.

West concluded that these health problems were due to nutritional deficiencies, and these people’s traditional diets were what kept them in such robust health throughout the generations.

And what did he find was a common factor amongst all of the different diets amongst the isolated peoples that he studied?

When Dr. Price analyzed the foods used by isolated primitive peoples he found that they provided at least four times the water soluble vitamins, calcium and other minerals, and at least TEN times the fat soluble vitamins —vitamin A and vitamin D —from animal foods such as fish eggs, shellfish, organ meats and butter from cows eating green grass.

Dr. Price discovered an additional fat soluble vitamin that he called “Activator X” and which was also referred to by others as the Price Factor or X Factor, and is now believed to be vitamin K2. It is a powerful catalyst which, like vitamins A and D, helps the body absorb and utilize minerals. It was present in the diets of all the healthy population groups he studied but unfortunately has almost completely disappeared from the modern western diet. Sources include organ meats from cows eating green grass, fish eggs and shellfish. Butter can be an especially rich source of Activator X/vitamin K2 when it comes from cows eating rapidly growing grass in the Spring and Fall seasons. It disappears in cows fed cottonseed meal or high protein soy-based feeds. Fortunately, Activator X/vitamin K2 is not destroyed by pasteurization.

The importance of good nutrition for mothers during pregnancy has long been recognized, but Dr. Price’s investigation showed that primitives understood and practiced preconception nutritional programs for BOTH parents. Many tribes required a period of premarital nutrition, and children were spaced to permit the mother to maintain her full health and strength, thus assuring physical excellence to subsequent offspring. Special foods were often given to pregnant and lactating women, as well as to the maturing boys and girls, in preparation for future parenthood. Dr. Price found these foods to be very rich in fat soluble vitamins A, vitamin D and Activator X —nutrients found only in animal fats.

All his findings were summed up in his book Nutrition and Physical Degeneration: A Comparison of Primitive and Modern Diets and Their Effects, which you can read in full for free right here if you’d like. Even if you’re not going to read it, at least click on that link and check out the tons of stunning comparison photos he took of the tribes and their teeth, before and after modern food, such as these: 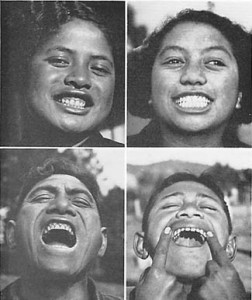 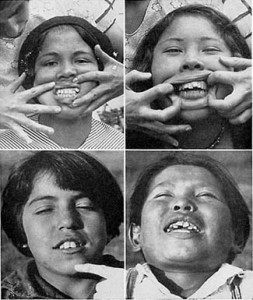 So anyway, time went on, West died, and all his hard work was pretty much forgotten until…

The Weston A. Price Foundation Was Formed

In the spirit of Dr. Price’s research, WAPF promotes traditional diets that consist of:

They also recommend all other aspects of a healthy lifestyle including plenty of sleep, exercise, natural sunlight, fresh air, and lowered stress levels.

Things that they do not recommend include:

Anyway… there’s something special about the WAPF, because it keeps growing at an annual rate of 10% each year (which is a lot), and every single nutrition blogger and “healthy person” that I highly respect seems to highly respect the Weston A Price foundation.

Why I Respect Them

What I like about WAPF is that it goes back to basics, because that is what Dr. Price observed amongst the healthy primitive people. It does not exclude whole food groups for no good reason, as long as they are unprocessed and properly prepared to make them as digestible as possible. Animal foods are healthy and nutritious – as long as they are from a healthy animal fed its natural diet. Dairy is healthy – as long as it is raw and unprocessed, unlike that at the store. Whole grains can be healthy – as long as they have been soaked or fermented to remove the phytates, leptins, or enzyme enhibitors that make them difficult to digest.

I know many of these WAPF ideas, particularly those about saturated fat go pretty heavily against what has been hammered into our popular and medical culture. Everyone “just knows” that saturated animal fats are bad for you – butter will give you a heart attack, cholesterol from eggs will clog your arteries, and if you drink full fat milk… well…. see ya in heaven. Or at fat camp.

What I find, however, is that what the general public “just knows” about nutrition is usually not correct, because so much of it and the scientific studies it comes from are awash in opinion, cherry picking, tunnel vision, incorrect reporting, political agendas, reluctance to change, and … oh yeah…. money and greed. There are TONS of studies showing that saturated fat does not deserve the bad rap it gets. Click here for an entire list of resources to help you bust this myth.

On the other hand, I’m sure we could also find tons that studies that say it does deserve its reputation.

Therefore, I don’t tend to pay too much attention to studies… as you can see, one day the studies say one thing, one day they say another, and to us lay people, deciphering them for the truth – especially about highly debated topics – is damn near impossible. I’d rather see what’s working in application – and studying real people, their health, and their diets, sure makes a lot of sense to me.

And That is Why West, Sally, Mary & Co Will Always Be  Friends of Mine

So… yeah. There you have it! The Weston A Price foundation and why I’m into them and highly recommend their recommendations.

Did you know about the Weston A Price Foundation before now? What do you think about their ideas? (also… did you ever have braces???)