How to Make Nourishing Bone Broth to Heal Gut and Skin 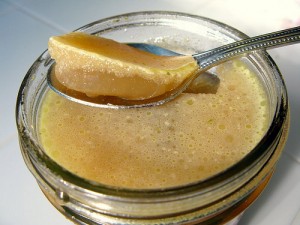 I know I’ve been talking about bone broth for a long time now, so finally – here are the instructions (and a video)!

What is Bone Broth, and Why Do I Want to Make It?

You know what broth is, right? The flavourful liquid in soups that, unfortunately, is usually made with water and fake flavour cubes?

Well back in the olden days, people made their own broth and that was done by boiling meat and bones and other random animal parts in order to extract the nutrients into the water and flavour it. Turns out that not only does it taste good, it’s incredibly healing (that’s right – chicken soup really does cure colds).

The broth contains easily absorbable forms of minerals we need – calcium, magnesium, phosphorus, silicon, sulfer and numerous trace minerals. Not only that, but it also contains chondroitin sulphates and glucosamine from the tendons and cartilage, which help with joint pain and arthritis. It also contains a substance called gelatin which has its own magical healing properties.

Gelatin in particular is fantastic for healing the digestive system, and if you have acne troubles, you more than likely have got some digestive stuff going on that could use some help. So bone broth is your friend.

The French were the leaders in gelatin research, which continued up to the 1950s. Gelatin was found to be useful in the treatment of a long list of diseases including peptic ulcers, tuberculosis, diabetes, muscle diseases, infectious diseases, jaundice and cancer. Babies had fewer digestive problems when gelatin was added to their milk. The American researcher Francis Pottenger pointed out that as gelatin is a hydrophilic colloid, which means that it attracts and holds liquids, it facilitates digestion by attracting digestive juices to food in the gut. Even the epicures recognized that broth-based soup did more than please the taste buds. “Soup is a healthy, light, nourishing food” said Brillant-Savarin, “good for all of humanity; it pleases the stomach, stimulates the appetite and prepares the digestion.”

My Video on How to Make Bone Broth

The Gelling Up Controversy

So, it’s kind of like an unspoken goal in bone broth making circles that you want your broth to turn to gel when it cools. It’s like the sign of a good broth, because it shows the presence of all the gelatin.

Well, I have a secret to confess – I can’t seem to get my bone broth to gel!!!

Maybe if there’s any bone broth vets out there, you can give me some tips. Why is it not gelling? From what I can tell, it seems like one of these mysterious things that half of the people get perfect gel every time without even thinking about it, and other people can never do it. And SOME people get gel half the time and the other time none even though they did the exact same thing with the exact same bones!!

The first couple of times I ever made bone broth, which was last summer, it gelled. Ever since then, never. NEVER GELLED! Whyyyyy.

I have some theories:

I feel like I’m doing numbers 2 – 4 right (at least nothing different than the first times I tried it). The 4th possibility may be my suspect one… the first times I made bone broth when it did gel, I only cooked it for 3 or 4 hours. Every time since, I’ve cooked them a lot longer. And this goes with what I have heard is that a shorter cooking time is better for gelatin, and a longer cooking time is better for minerals.

So maybe the best way to do this whole thing is cook it for 3 or 4 hours, strain it, add more water, and then cook the bones for another 20 or however many hours. That way you get the best of both worlds. I’m going to have to keep doing some experimenting.

Either Way, I Gave up Caring About Gel

I really wanted it to gel, but when I couldn’t get the gel, I gave up caring too much. Whatever you made in that stock or crockpot is dang good for you, so even if it’s not perfect – drink up!

Have you made bone broth yet? If so, can you get it to gel? What are your gelling conspiracy theories?