You Can Be 100% Overwhelmingly Beautiful – Even With Acne

Let me tell you about my friend Rikke.

Well, to be honest…. I don’t know if you could call her a true “friend” anymore since I haven’t actually talked to Rikke in about six or seven years (although I would like to consider everyone out there my friend!). She’s just one of those random people who floats around on my facebook now.

I think about her fairly often though.

Well, I met Rikke when I was backpacking around Australia back in 2006.

She’s Danish. And you say her named like “Reggae”. She, like me, was a solo traveller. Before I met her, she had teamed up and was hanging out with a trio of British boys.

I met the four of them at a hostel in Byron Bay, and spent maybe two or three weeks hanging out and traveling with them. This is the ways of the backpacker – you meet people constantly, they come, they go.  For now, “Reggae” and the British Boys had become my temporary family.

Now, let me tell you – I don’t sit around, 6 years later, thinking too hard about the trio of Brits.

But what was it about Rikke that stands out in my mind after all this time?

Not like, terrible severe acne or anything. But she definitely had the mild to moderate acne that the majority of us are dealing with. It was enough that I distinctly noticed it, anyway.

But get this – she was also one of the most beautiful people I had ever met.

And although she was pretty, I don’t necessarily mean that physically.

Something about her personality… she was just… radiant. She was always smiling, confident, outgoing, kind, and just… cool. She had this wonderful, refreshing zest for life, and she was the type of person that made you feel all warm and fuzzy inside just by being in her presence. And I’m pretty sure  all three of the British guys had HUGE crushes on her (one of them definitely did, because he wouldn’t give up till she dated him).

Whatever she had going on, it definitely transcended any acne she had.

I was actually in awe of her, because I too had mild/moderate acne at the time. Probably even less than she had. And I was absolutely mystified by the fact that Rikke never seemed fussed about covering it up. I thought “how is it even possible someone could be comfortable enough to not cover up their acne if they could?”. I was running to the bathroom every morning as soon as I woke up in order to cover up any spots before there was even a chance of anyone glimpsing them. Her confidence in the face of acne was practically inconceivable to me (I just didn’t get it, but I was seriously impressed by it!).

I mean, who knows though. Maybe her acne really was killing her on the inside, but you’d never know it. Her personality and confidence outshone everything and all flaws and she was an extremely attractive person.

It’s funny too because even now when I think about, say, a person who runs to the bathroom every morning and is clearly not comfortable with herself  and her flaws, and contrast that next to someone with acne who is completely confident and lets it show because she loves herself…. which is the more attractive behaviour?

Whenever I’m feeling a bit down about acne, it actually helps a great deal to think of her. In my head, she has become like a role model to me in order to help me keep acne in perspective and remind myself that it’s really not that big of a deal after all.

Thinking of her reminds me that personality is 100% more important, and that I could save myself a great deal of misery if I just remembered that. 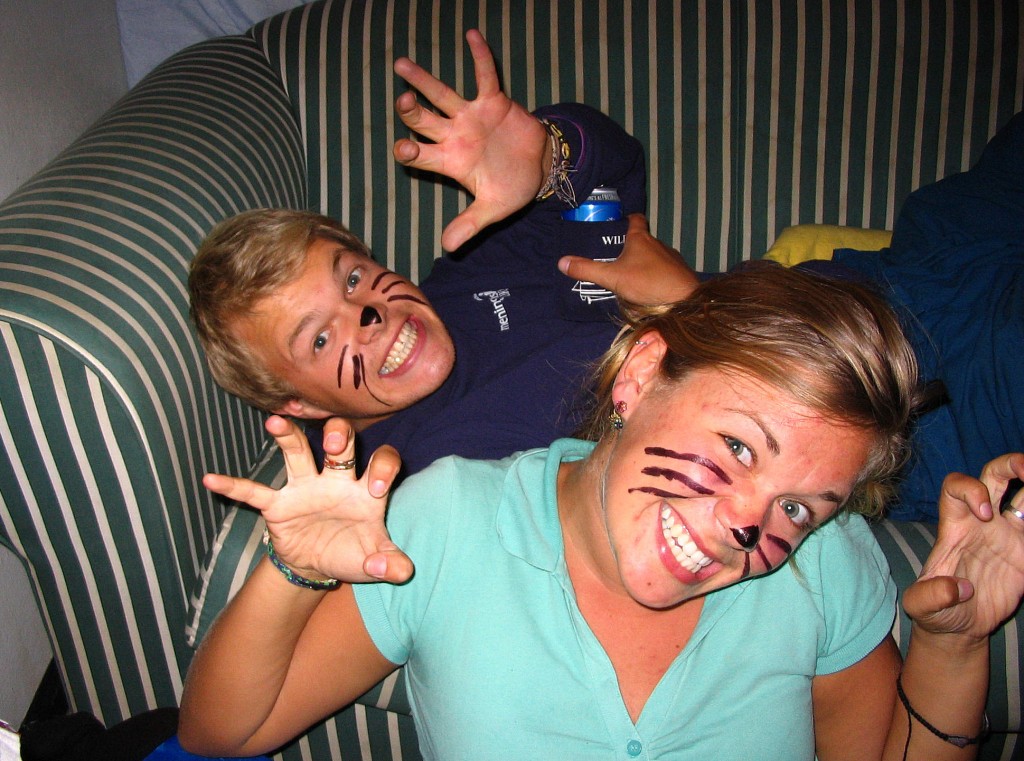 What About the Dudes Out There?

Although Rikke is the one that I look up to the most (maybe because she’s female and I am also female), another example that always pops into my mind alongside her (in the “cool, awesome people with acne” category) is my ex boyfriend’s brother, Michael.

Again, he didn’t have severe acne or anything, but he definitely had an acne problem. Yet, I never got the impression that his acne bothered him. And he was hot. And really, really cool. And the ladies just loved him. So there you go.

This Little Tricks Works with Other “Flaws” Too

I’ve found that this little trick – thinking about awesome, confident people – also works with other things you may be self conscious about.

For example, I’ve always been extremely self conscious about looking young. Not so much being short or small, but it’s just “looking young” that has always struck this intense nerve with me. Say I’m short or little or cute all you want, but say I look young and I want to rip your head off.

So, much like how thinking about Rikke and her acne helps me to calm down about that, in this case, I think about an Aussie girl named Catia who I also met on my Australia trip in 2006.

She was very small, like me, and looked really, really young, yet, she had tons of awesome friends and she just exuded coolness in this goofy, funny kind of way.

And what really impressed me about her was that she never seemed like she tried to make herself look any older by wearing makeup, or “mature” clothes or anything. She just seemed perfectly at ease with it, and so confident. Again, because looking young always drove me so crazy, it baffled me how this could be so, but impressed me so very much. And thinking of her makes me feel awesome.

Do you know people who have acne or some other flaw, yet their personality and joy shines through so much that they can’t be anything but amazingly beautiful?