Why Does Acne Make Me Feel So Trapped? 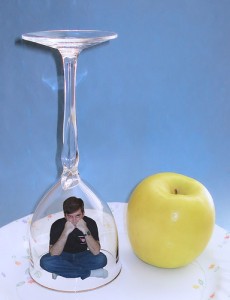 One of the reasons that acne makes me feel so trapped (ala Monday’s post) is that I realize I’ve always been a bit addicted to the feeling of total and complete freedom.

Basically, I hate commitments and I love unstructured free time.

I don’t know if that’s exactly weird… I’m guessing most people would prefer to have fewer commitments in their life. But I REALLY don’t like having a lot of things that I feel like I have to do. I never have.

Growing up, I chose to partake in very few extra curricular activities, because I didn’t like the idea of having a schedule – a commitment – that I was to adhere to week after week. I was definitely not the type of person that you’d see on 3 different sports teams, with an after school job, and as head of the yearbook committee.

My adult life has been spent in fits and spurts – sure, I have no problem keeping a job. I am a very good employee! I show up to work on time and rarely, if ever, miss a day for any reason.

But I have never ever had a job that was an ongoing commitment for more than 5 or 6 months at a time (aside from The Love Vitamin! which is kind of a different story because I love it so much, but even commitment to this can be a struggle at times…) The only reason I could bare the idea of showing up to a job day after day is so that I could save enough money to quit and have a period of complete freedom.

Extended, unstructured travel is the ultimate in complete freedom. You’ve saved your money, you’ve quit your job. For a period of time, there are zero commitments…. the world is your oyster! You can go anywhere, do anything, and meet anyone you want to.

The idea is exhilarating to me. Which is why I’ve done a fair bit of travelling in my life.

Not to toot my own horn, but… you know. I’ve seen some cool stuff. And I’m not quite ready to quit… I still want to go to India, the Middle East, South America, and East Africa!

But the vast majority of this traveling I’ve done was before my stint with severe acne. Yes, I had mild acne, but I didn’t have the fear back then. Acne annoyed me, but it didn’t scare me. Now acne scares me a lot.

If I went on an extended trip, there’s no way I could eat the same healthy way I do at home. Even I put a lot of effort into trying to eat good food while abroad, I still couldn’t eat nearly as well without a crazy amount of not-worth-it stress involved.

I believe that this is the reason that I get into the pattern with my acne that I described in Monday’s post. I let myself go with the food for a while, I don’t break out at first, so I think ‘sweet! I’m FREEEE’. And then I break out (probably because I was thinking about it so much), and cry.

I believe the reason that I do this is because deep down, I really, really, really hope that my acne is emotional, or stress based, and not solely diet related. Because if it’s not diet related, that means that if I somehow am able to just let go of the fear, then it means that I could once again find that sense of total and complete freedom.

I could travel the world and eat whatever I wanted, and all I had to do was be HAPPY 😀 and so therefore I’d also have no acne (or very little acne), and no fear, and wheeee. Life would be yay! Puppies and unicorns!

I test myself to see what will happen. Eating healthy to keep the acne under wraps when I’m at home is all find and dandy. It isn’t too difficult. But I want to see what would happen if I were away from home, not in control of my food. Would I still break out?

But the test itself is stressful, so that creates acne, which then confirms my fears that I really can’t leave home and eat unhealthy, even if it was actually the stress and not the food that caused it.

It’s such a weird, stupid, annoying, convoluted paradox that goes around in circles.

I sometimes think I can do it. I psyche myself up and say YAH! I can go on this trip! I can stop worrying. It all sounds great until you’re there in the midst of it and it all creeps back up on you.

Oh it sounds so easy, but it’s just not! You maybe achieve it for a day or two and then you fall right back into your old patterns. At least I do.

Why I think Loss of Freedom Is Like my Phantom Limb

The reason I think that this is is my major feeling of loss that accompanies my acne fear is because of an incident that occurred way back when:

Once I got clear from my severe acne, I stayed completely clear for about… 2 months.

And then I got my first pimple. Just one. It pretty much destroyed me though. I was so orthorexic and crazy about my food back then that it was just completely devastating. What else could I do? I felt like I couldn’t possibly improve my diet anymore.

It was a sucky place to be in. I felt like my oppressively strict way of eating had completely robbed me of any freedom. The idea of unfettered travel was out the window. I think a lot of the excitement that I used to feel for the future had kind of died because the freedom was gone. The hope was gone.

Yet as crazy as it sounds – I was so utterly horrified of the idea of severe acne, that somehow, this situation seemed a million times better.

So anyway… at this point, I started thinking that maayyybeee my acne really did have something to do with my emotional health. May as well look into it, there wasn’t anything else I could do.

The reason I had ignored the possibility previously was because I really couldn’t think of anything particularly traumatic that had happened to me when my acne got so bad. So I felt like it must be completely hinged on my diet.

That was until I hung out with my ex boyfriend, the one I had been with and broke up with shortly after my severe acne episode. We had broken up completely mutually, there were no hard feelings on either end, and we were still friends. He came to town one day, and we hooked up… because why not (don’t tell me you’ve never hooked up with your ex! lol).

And unexpectedly, I felt awful afterwards. I felt CRAZY afterwards. I cried so hard on the way home, like I was on a rollercoaster. And I wasn’t sure why. It’s not like we fought or anything.

After that, I put two and two together.

I had some pretty major self esteem issues going on when I was with him. We were very different people with different tastes and I felt totally ‘imperfect’ because I couldn’t be his perfect woman. Even though I didn’t love him and he wasn’t my perfect man either. I guess I just wanted to be everything to everyone, and it killed me when I couldn’t be. Impossible.

Anyway, as a result, being with him did a total number on my self esteem – or at least brought the issue to the surface.

No WONDER I broke out so badly then!

It was such a eureka moment. Like I had solved a riddle. I understood what had happened.  Like I didn’t have to be trapped anymore. I wasn’t with him anymore, so I could now be free. Freedom was possible! And suddenly I felt overwhelming hope like I hadn’t felt in months.

And like magic, the mild acne I was having cleared up. Wow.

Um… but then two weeks later, I actually did go traveling to California to reunite with my current love, Luke, and I got so stressed out about not eating exactly the way I wanted, that I broke out quite significantly the entire month we were gone.

Freedom given, but I hadn’t learned to live it.

I Want to Learn to Live It!

Man, everytime I write something like this, it just seems so obvious what my problems are and how they relate to my acne. Just stop stressing out and it’ll go away!!

It’s obvious: I have self esteem issues because I want to be perfect. I want to be sexy and grown up and desirable in the eyes of others. Acne majorly threatens that. Therefore, acne scares the living daylights out of me and that fear takes away my hope for freedom by keeping me veiled in it. Which makes me really sad and perpetuates the cycle.

It always just feels so simple … like one little push… one little ledge I have to jump over… and I really can be free. It all sounds so silly like there is nothing to it. I know the problem, just get over it. Just do it. The fear is all in my head.

How could I let a few pimples stop me from traveling and having the most amazing experiences of my life? It all sounds so crazy!

Acne isn’t keeping me from doing ANYTHING. All I have to do is just let it go. LET GO! LET GO OF MY UNATTAINABLE IMAGE OF PERFECTION. LOVE MYSELF.

Gosh, it sounds so easy.

Why is it so hard?

One day I’ll fully get there. I know it. I’ve already come leaps and bounds from where I was in the memory described above. Thanks for supporting me on this journey (and listening to my rambles!) 🙂