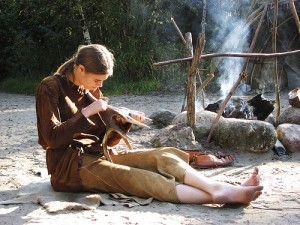 While the Paleolithic aka Primal diet is not the diet that I personally used to get clear (which shows you can get clear on a variety of diets), I am always on the hunt for more information.

I want to know what the absolute healthiest diet in the world is because that is the diet that is most likely to get people clear, happy, and healthy quickly and easily.

The more I read and investigate, the more I am becoming intrigued with the Paleo diet and its possibilities for those of us with acne.

The idea is that humans have existed for millions of years and we have been eating natural meat, vegetables, fruits, nuts, and seeds for that entire time. Only in the last 10,000 years has agriculture brought us things like grains and beans, let alone any kind of processed foods. Yet our genes have not evolved much since our paleolithic days so our bodies aren’t necessarily going to be stoked on these new inventions.

It makes sense to me because our bodies don’t always do that well on these foods. Wheat is often one of the most inflammatory things you can eat, and most people don’t have the easiest time digesting beans. Don’t get me started on processed foods.

Also, the more I learn about our earth and how to save our environment, it’s become very clear to me that an ideal like veganism isn’t always the way to go. Eating local and growing your own food is what is going to save the planet, and what are you most likely to get locally? Meats and veggies… not grains. It seems obvious to me now that simple local eating is the way to do good for the planet and our bodies at the same time.

Check out the video to hear more of my thoughts on the matter and why I’ve been thinking so much about this lately.

The websites mentioned in the video are: