Is it Better to Be Open About Acne, Instead of Hiding It From Those Closest to You? 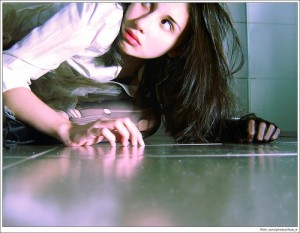 Last Friday, I let you know about how I had told my friends about my ongoing struggle with acne anxiety, and how I ended up bawling my eyes out in front of them – releasing all sorts of emotions!

It got me to wondering – how open are you with those close to you about the fact that you have acne and it bothers you?

Up until my episode with severe acne, I never talked to anyone about acne – ever. Not my friends, not my parents, and especially not any of my boyfriends.

Even if the topic came up in conversation amongst close friends, I would have offered no input and tried to change the topic of conversation as soon as possible, lest it brought attention to the fact that I had acne.

I even remember times from middle school and high school when my group of girlfriends would want to get together before a school dance to get ready and do their makeup together, and I would never want to participate.

I wondered why anyone would want to do their makeup in front of someone else – to me, this was something that was done in strict privacy. If I did my makeup in front of someone, they would see me putting makeup on my spots and it would draw attention to the fact that I had them, and … well… don’t ask me what I thought would happen or why anyone would care, but to my subconscious, it obviously wasn’t something good. It was simply a situation I wanted to avoid.

And then once I was in my older teens and twenties, and I started having boyfriends… ohhh boy, that’s where the real stress began.

For one, when you’re kissing a boy, it often rubs the makeup off your zits. And then, of course, they’re right there up close, looking at you. And it’s a sexy situation, you know. You want them to think you’re sexy. And then I would always worry that they were thinking “huh? you looked fine ten minutes ago before we made out, and now what’s this all over your face…”

Basically, it seemed to be their imagined analysis of the discrepancy between my made up face and my “morning after, sun shining in the window illuminating my zits face” that caused me so much stress.

And there was NO way in the whole world I was ever going to actually discuss this with them. I was never going to ever say “hey. I have some acne, and it bothers me. Does it bother you?”. That would mean acknowledging its existence, and I couldn’t handle that. I’d rather be in denial, so instead, I was just going to continue bottling it up and stressing over what I think they’re thinking about me.

It wasn’t until my skin got so bad that I simply couldn’t hide it anymore that I broke down and explained to my boyfriend at the time what was happening.

It was like coming out of the acne closet. And although it only happened because I was forced to, in a way, it was a huge relief.

I guess you could say the relief was so great that I wanted to continue it… I forced myself to be honest about it to others about it if needed… and eventually I took the greatest leap of all – I took my acne problem public with this blog (never would have seen that coming ten years ago!)

You know what? It feels really good to be so honest and just say “Here I am. No, I’m not perfect. And it’s okay”. It was definitely a major first step in self acceptance.

I can’t say like it completely got rid of all acne related stress though – obviously not – but it certainly cut down on it big time. Trying to pretend like a problem you have doesn’t exist isn’t really healthy, and bottling it up seems to amplify the emotions that go along with it. To me, it felt like being in a pressure cooker.

So for anyone out there who is stressed from hiding their acne from someone close to you, I highly encourage you to just talk about it with them. Yes, it’s scary, and there is a good chance that they won’t truly understand the pain and embarrassment, especially if they’ve never had acne – but at least it’s out there. That way, you don’t have to spend the rest of your life wondering if they notice your skin problems… you’ll now know that they know about it, and you’ll find that they love you anyway!!

Watch This Article in Video Form

Do you hide your acne problem from those closest to you? Does hiding it cause you a lot of stress?