Do You Forgive Yourself For Having Acne? 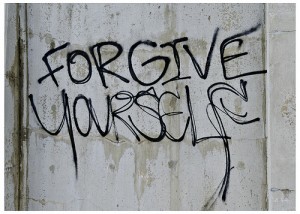 I was thinking about something. It’s got to do with both of my last articles – the one about “How to Start Loving Yourself” , and my very last article, which was the guest post by Stefan – a young man who took Accutane when he was 15 and is still living with severe side effects 7 years later.

I was pondering… has Stefan forgiven the Roche Company (the people who manufactured Accutane) for what they’ve done to him?

He has every right to be angry with them. If he hadn’t taken their drug his life would probably be a lot different. Probably a heck of a lot better. Now, I don’t know Stefan really well or know where he is on his personal journey – so forgive me, Stefan, for speculating about it and don’t take any of this personally  – but I’m thinking he’s probably holding a bit of a grudge. I think most would be.

In a way this is good… his anger may be fuelling his drive to tell the world about his experience and as a result, really truly make a difference in other people’s lives. That’s rad.

On the other hand, holding onto the grudge can have some negative side effects for yourself.

Why It’s Best Not to Hold Grudges

When someone or something has done you wrong, it can be really easy to let the anger and vengeance build up until these negative emotions take over, and you are swallowed up by your bitterness and sense of injustice.

Once you get to that point, it’s really hard to let it go.

It’s hard to let go because if someone or something else is to blame for your problems, then the responsibility is off you. So it’s much easier to pass the blame.

But it IS their fault, I can hear you say.

Yeah I know. Don’t worry though. You don’t have to blame yourself instead. This isn’t about creating more blame. And you still don’t have to like whoever did you wrong. Stefan doesn’t have to go have dinner and drinks with the president of Roche, meet the family, and pet the dog. He can still tell the world of his plights and how evil they are in the name of good. That’s okay.

But not forgiving those who have done you wrong on a personal level really only keeps you hurting. You are just handing them the power to keep making you feel bad. And you think they SUCK, so you don’t want to give them the power, do you?

What Happens When You Hold a Grudge

This is why you don’t want to hold a grudge:

Well, because, they can’t fix you. They can’t help you. They aren’t going to make your life any better by you staying mad at them. Hating them only makes things hard.

But YOU can fix your life. You have the power. You can improve your situation and move into a happier and more peaceful state of mind. But until you choose to become the creator of your own reality and take full responsibility for your own happiness, there’s no way you can get there. You will never put in the 100% effort to do so unless you take 100% responsibility.

That means you have to forgive them. Sorry.

It’s Myself I’m Mad At

So, many times it can actually be that you’re holding a grudge against yourself, and not someone or something external.

You might be mad at yourself for failing that exam, saying something stupid, missing that perfect opportunity, losing your temper, hurting someone, making a big mistake, or not being smart enough.

You could also be angry with yourself for having acne. In fact, I think many of us are angry with our bodies for betraying us by giving us this stupid, annoying, piss pot curse called acne.

Again, we have to forgive ourselves for being imperfect souls, or we can never move on to take the full responsibility for our own happiness. And part of being truly happy is LOVING YOURSELF!!! It’s kinda hard to love yourself and be mad at yourself at the same time. So you have to let yourself off the hook.

Unfortunately, forgiving yourself can often be tougher than forgiving someone else.

How to Forgive Yourself For Having Acne

Watch Me Talk About Forgiveness Yourself in Video