My Mental Breakdown Over Factory Farms & Things Made in China 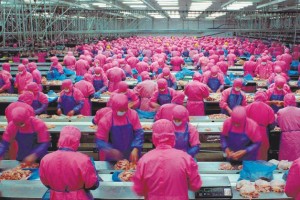 Okay, so the other night, I watched a movie that deeply affected me. It’s called Samsara.

You know that saying “A picture is worth 1000 words?”… well I think that saying was made for this film. It’s a completely non-verbal, non-narrative movie that takes you through scene after scene of stunning imagery from around the world.

“Samsara explores the wonders of our world from the mundane to the miraculous, looking into the unfathomable reaches of man’s spirituality and the human experience. Neither a traditional documentary nor a travelogue, Samsara takes the form of a nonverbal, guided meditation.”

In short, it’s amazing. It’s absolutely breathtaking. “Ominous and beautiful” is about the right words for it. Here’s the short trailer for it:

The thing is, it doesn’t only show stunning scenes of joy and beauty. No, it also takes you through all the other stuff too to show you the whole human experience. And it’s not real subtle about it. I don’t know if that is a bad thing or not, but I didn’t know what I was getting myself into when we turned it on.

Haunting images of lady boys in Thailand; disfigured war veterans; factory workers in China; pigs, cows and chickens in the factory farms – all this juxtaposed against westerners shoving their faces at McDonalds and rampaging the shopping mall. That wasn’t the whole movie, but I suppose those were the parts that affected me the most deeply.

For full disclosure, I happened to be high on pot brownies at the time I was watching this. Although I don’t partake in that kind of thing regularly, I have never been against the practice of using mind altering substances occasionally. It really helps you to step outside yourself and look at the world in a new and visceral way. I think they can be an incredible tool for self realization and growth, if used correctly. Even if you don’t have a good time, you always learn something. At least that’s what I’ve found.

Well anyway, I basically ended up having a mental breakdown. I was horrified. These images were too much for my high brain. It was way too intense. I had to leave the room, and then I ended up bawling my eyes out for a while.

Through this film, I felt like I had the weight of the sadness of the world upon my shoulders. Whatever the filmmakers did was some kind of wizardry, I tell you! These disturbing images pierced my soul like I had never felt before. The empathy overwhelmed me.

And then the gratitude overwhelmed me. I am so. fucking. lucky. Every day I wake up – I have a roof over my head, heat, trees outside, a family who loves me, an abundance of food to eat, with money to spare for fun and frolic. I am a free woman to do what I please each day, work at a job that I choose. I do not live in fear of a man who abuses, assaults, or rapes me. I am not a prisoner. I can dance, I can sing, I can travel. I have a freedom to move my limbs. I can walk myself to the bathroom, unlike those animals in the factory farms.

I think what really got to me is this scene that featured pigs… mother pigs who couldn’t move because they were trapped lying on their side beneath metal rungs. They just lied there like massive fat blobs, while the cute little piggies squirmed around her belly getting the milk. The piggies reminded me of my two little dogs, Sharkie and Huck. 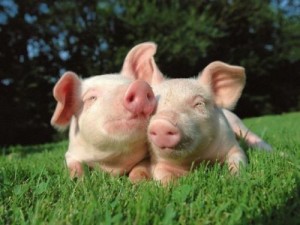 I guess the reason I was so horrified is because I don’t want to change. Change is hard. But after watching this film, it seemed like there is really no other option than for me to smarten up and quit eating factory farmed meat and spend a little more money to not buy things made in China.

“Great. Now we have to become vegetarians”, I jokingly bemoaned.

I mostly eat ethical meat at home and definitely make an effort to eat locally farmed food, so I do feel good about that… but if I am out at restaurants or other places, I will take the easy route and have any old meat without worrying too much about where it came from. And although I am not a mega consumer compared to many, I will also not hesitate to buy cheap things if I need them instead of spending more money to get something else, going without, or expending more effort to find it second hand.

Watching this film was just a reality kick to the face. It was hard because I already knew the reality; I was just ignoring it. It was a reminder that I can be pretty selfish. I am the luckiest person alive, yet I can’t even extend the courtesy to those factory workers and animals who are less fortunate than me by changing a few of my choices? Because it’s just not as convenient for me?

Don’t get me wrong. Even though I was overwhelmed by this movie, I am not going to take on the sadness of the world and go around feeling morose all the time. I know that’s not going to fix anything. I’d prefer to go around feeling grateful for my awesome luck instead. It’s just that I know that there are things I can do better for those who aren’t as lucky, and that is making conscious choices with my dollars.

Luke was quite affected by it too. He has this breakfast he makes every morning of a bagel topped with eggs, bacon, and homemade avocado. He LOVES it. Yet, he was like… well… I guess the jig is up. I’m not buying grocery store bacon anymore.

I mean, okay. I know we were high when we watched this. And while I was crying, he was like “… well, wait till the morning, you’ll feel better.” And I did, to a degree. And it was tempting to just say ‘hey whatever’ and go back to doing things the convenient way. But I know that’s not right. And he knew it too. It’s too easy to just hit stop on the movie and go back to turning the blind eye. I’m sure I’m still not going to be perfect about it, but I’m going to try a little bit harder.

Watch Me Talk About This in Video

Anyway… don’t let this article make you feel guilty if you don’t always make the most ethical of choices either. I’m just sharing my experience I had over the weekend to give us all something to think about. Share your thoughts in the comments below.