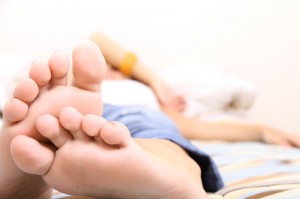 I have this memory of when I was a kid. I don’t know what was up with my feet, but I had a lot of broken and loose skin all over my feet and toes.

Just so you know what I’m talking about… it’s kind of like if you get a callous, or you rub your skin on your hands or feet too vigorously on something, and the top layer of skin can painlessly become loose. It’s still party attached to your skin, but there’s an edge just hanging there… opaque and just begging to be ripped off or picked at?

Do you know what I’m talking about?

Well anyway, when I was a kid, I had a lot of this loose skin all over my toes. I don’t remember how or why, just that it was there.

Now, it really wasn’t a big deal in most cases. In fact, when my feet were dry, you couldn’t notice this loose skin because it just blended in. However, when my feet got wet, my toes looked pretty dang gross – covered in loose, white, soppy, wet, dead skin.

I have this very distinct memory of being in the shower room after swimming lessons and being very embarrassed about my toes.

What was the obvious reaction to this? Try and pick the dead skin off, of course.

Seems logical, don’t you think? After all, it’s just hanging there looking like it’s only goal in life is to be free of my foot.

Sadly, this never worked. The more I tried to get rid of it by picking it off, the worse it got, and the more embarrassed I became at swimming lessons. But I kept doing it, hoping that one day, things would magically turn out differently and the dead skin would disappear.

One day I decided maybe I should just give up. So I decided that, as profoundly tempting as it was to rip off the loose skin, I just wouldn’t do it anymore.

Not surprisingly, that’s when the problem cleared up and I was asked to sign a lucrative contract as a child foot model. Just kidding, but really – the dead skin went away and finally my feet looked normal when sopping wet at the swimming pool! No more shame!

So, it’s also not surprising that when my acne was really severe, it took a huge leap forward toward clearness when I finally decided to stop picking and popping my pimples and just left my skin alone. 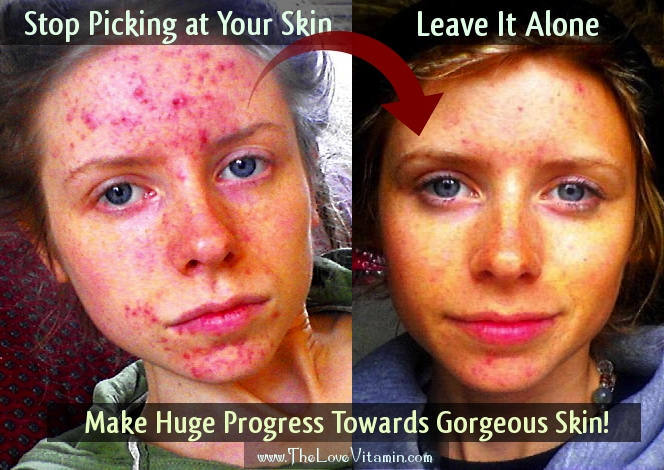 Later on when my skin was mostly clear, I was still getting a few pimples on my temple area. Because this area was not in my immediate line of radar when I looked at my skin in the mirror, I wasn’t AS concerned with having pimples there as, say, right in the middle of my forehead, cheek, or chin. So I wasn’t as conscious about these spots, and would pick at them mindlessly while on the computer or sitting on the couch.

Even though these spots didn’t cause me a huge deal of grief, I did still wish they would take a hike. But they just kept on coming. That is until I decided to make a concerted effort to completely stop picking at the area. And guess what? That’s when my temples became a pimple free area!

Later on, I took this whole concept of “leaving your skin alone” to the extreme, and embarked on the caveman regimen, where you don’t put anything at all on your skin. That means no products at all, and no washing your face. It’s the ultimate in irritation reduction. I did it as an experiment, but I’m still doing it more than a year later since it worked so well.

Doing this managed to give my skin another leap toward reducing acne. Not to mention it’s the easiest skin care regimen ever.

We spend so much time fighting with our skin. When we feel anxious about the state of it, the natural reaction is to want to do something about it in order to push that anxiety away. But maybe the best option is to just put the fingers down and let your skin work itself out on its own. So far all of my experiences point to this being true.

However, I know that a lot of people have an extremely difficult time resisting the urge to poke, prod, and pick, and find it a practically impossible prospect to just leave your skin alone. If you need help to finally stop so you can give your skin the best chance to heal, I have an ebook available called Cure Your Skin Compulsions: The Ultimate Guide to Quitting Skin Picking, Popping, Touching, and Obsessing. It has a step by step procedure for quitting so that you can definitely succeed. 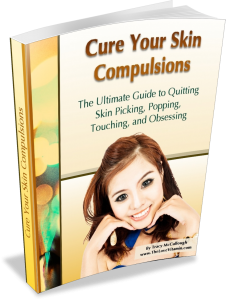 Get Cure Your Skin Compulsions now and quit picking, popping, touching, and obsessing for good!