Are You A Woman? If You’re Not Physically Attractive, Then You’re Worthless (or so you’re being told) 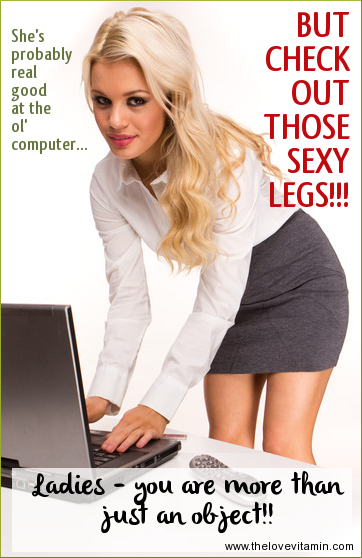 Don’t worry – this shocking title is not what I think. But that is the message that is pounded into our heads day after day to the point where our entire culture believes this. I’ve been brainwashed about it too. Everyone has.

Whenever I go to write a blog post for you Love Vitamin fans, it’s usually because there is something that has been on my mind lately or has popped up over and over again and just wants to get out on paper. Well, lately it’s been this thing about sexual objectification of women.

What is sexual objectification?

Sexual objectification is when someone has been reduced from a living breathing person with feelings, to nothing more than an object whose entire existence is for the purpose of pleasing someone else’s sexual needs. Kind of like a sex toy.

That might sound a little extreme, but it’s not.

Everywhere you look in the media, women are being reduced to sex objects. They are being portrayed as nothing more than body parts. Men’s needs and wants appear to be more important than how the woman feels. A very narrow definition of beauty is paramount. Sex is used to sell everything, and it tends to focus on women’s sexuality as the selling point. Violent and demeaning images are becoming more and more common.

Their abilities, their kindness, their strength, their generosity, their determination, their loving heart – nope. Don’t matter.

You can see this by the fact that when you get a woman in a position of high ranking status – like a politician or judge – it never stops mattering how she looks. We don’t care if she is the brightest, most ambitious, and most powerful lady in the land, whose career has NOTHING to do with how she looks – the conversation never totally leaves how she looks. And due to objectification she just can’t win even if she does fit the “picture of beauty”. Hillary Clinton is a professional and stoic? She’s a bitch. Sarah Palin is good looking and feminine? She’s a ditz.

No matter how powerful, her worth is still based on how attractive she is, or at least it is always brought up. Where as with a man, there is definitely a point where people stop talking about it.

For example, you may notice in movies and TV, unattractive men (I mean this in a stereotypical sense) can have have leading and supporting roles, yet still be a smart, interesting, funny and dynamic character (think Drew Carey, Steve Buschemi characters, the sidekick guy from Superbad).

However, almost all leading and supporting roles are of classically attractive women. If a female in a supporting role is unattractive, every line and scene she is in has to be completely focused on how fat and disgusting and horrible she is (think Mimi from the Drew Carey show, or sidekick from Bridesmaids). That is all that she is. Her entire purpose for existing in the show is to be degraded.

If a male comedian is unattractive? Cool. A female comedian makes a few poor jokes? Well, she’d probably be a lot funnier if she didn’t have so many wrinkles.

Those boys who raped that girl over in somewhere Ohio and got sentenced to two years in juvenile detention and put on the sex offender registry? The media seemed to only be concerned about the fact that the poor football players’ promising futures were now ruined by the sentence, not the feelings of the girl whose body got used without consent for their pleasure.

It’s not just men saying this stuff either. Men are not the enemy, only fellow products of a f*%#ed up society. Us women are digging our own graves, judging one another, calling each other bitches and sluts, focusing on their fellow women’s appearances, and propelling the objectification culture forward. We are soooo brainwashed.

As a result, we are also self-objectifying. We are hyper aware at all time of how we look to other people to the point where we can’t concentrate on anything that actually matters. It often seems for many women and girls that the most important thing in life is to be eye candy for someone. And the worst part is that we’ve confused objectification with empowerment. We are eating up the message that we are actually sexually empowered by all this, when that couldn’t be further from the truth.

For more of a visual explanation of this whole concept, check out this trailer for documentary Miss Representation:

You can watch the whole documentary here. It kind of made me cry.

Why has our culture been engineered this way? Because the more insecure you are, the more shit you’ll buy to make yourself feel better. By better, I mean reach some unattainable freaky standard of beauty that has been set for us. Good thing you’ll never reach it, which means you’ll just keep buying shit!

Hey, it’s working. People are consuming more and more media every day, more and more garbage beauty products, and it’s practically impossible to find someone who is not at least somewhat insecure about how they look.

And I know – it’s not just women who are made to feel insecure by media, but women are majorly targeted in this sexually objectifying way. Men have their own challenges with society and media, mainly trained insecurities over power, wealth, and not being able to show emotions, and I don’t want to discount that. In fact, these issues facing men are only contributing to our gender bias issues since it is suggested that they are sissies if they stand up for women and treat them with respect.

Anyway… I know for a fact that this is why unhealthfully obsessing over having perfectly clear skin has been an issue for me in the past. It’s because I was trying to reach for and keep that narrow definition of beauty that I have been told is the most important part about me. Acne – especially severe acne, but mild acne too – was a major threat to my perceived self worth. That was why it has been so emotionally painful for me – not because of a few red bumps.

We’ve all taken this bait – hook, line, and sinker. And it really sucks, because unfortunately women aren’t believing in themselves that they can be great, powerful, amazing women. Our ambition is at an all time low because we think we can only be great if we look a certain way.

It’s probably because I have just written this ebook about facing your fears and following your dreams that this has come up for me so strongly – are my urges for you to be all you can be going to be trumped by this horrible message that we have all received??? Are my fellow ladies going to give up their chance to have AMAZING, fulfilling lives due to fears about how we look??

Another reason I decided to write this post is because of the recent Dove soap ad that’s been going around social media like wild fire. It’s being touted as an ad that ALL women should see.

If you haven’t seen it, it’s about a handful of women who get their faces sketched by a forensic artist based on the way they describe themselves. Then the forensic artist sketches a second drawing, this one is from the way a stranger who had spent some time with her described her face.

Basically, the drawings from which the women described themselves were a lot “uglier” than the ones described by the other person. By uglier, I mean less attractive than the standard beauty prescription of “thin, fair skinned, young, blue eyed, etc”.

The message was that you’re a lot more beautiful than you think you are.

And sure, that is a good message. We are obviously really, really hard on ourselves. But this ad is still telling women that their self worth is only based on how well they live up to the classically portrayed portrait of physical beauty.

I mean what if you actually look like the “ugly” drawings. Does that mean you aren’t worth anything?

I didn’t quite get this at first, when I first saw the ad. I watched it on Facebook, and I thought “hm. Well, that kind of seems up my alley as far as stuff I tend to share. Should I share this?”. A reader even emailed me and said this exact thing and suggested I share it.

Something about the idea felt uncomfortable though. I wasn’t sure why. Was it because everyone else was already sharing it and I didn’t want to flog a dead horse? Was it because, despite the seemingly important message, I knew it was still just an ad trying to trick women into buying crappy, chemical filled soap? (Did you know that apparently Dove is owned by the same company who owns AXE, whose ads are some of the worst offenders for objectifying women?)

Well anyway, something last night randomly compelled me to google and read about “sexual objectification of women”. And then today, I randomly came across this article, which explains exactly why this Dove ad is not God’s gift to women’s self esteem (seriously, read that article. It’s really enlightening).

And then it all clicked as to why I didn’t feel comfortable sharing it.

It kind of made me sad that this message is so entrenched in our society that people, including me, don’t notice this even when something like this is getting shared a gazillion times left and right all over the net.

There is nothing wrong with you – it’s our society that is wrong for reducing us to nothing more than tits and an ass. Don’t let advertisers get away with this! We are amazing and strong and worthy no matter what we look like. No matter how much we weigh, no matter how many wrinkles, and no matter how many pimples.

Turn off the TV, get off Youtube, and go find out who you really are!

Watch Me Talk About This in Video

Have you noticed this whole objectification phenomenon? Does it concern you? What are your thoughts?