Emotional Acne Stuff that I Still Need to Work On 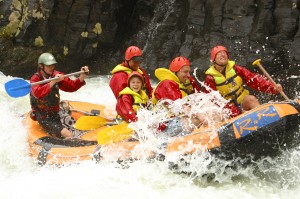 Last year, I won a full day white water rafting trip for four people from a local radio station. The other day, my boyfriend, Luke, my best friend, Jesse, her boyfriend, Lee, and I all hopped on the ferry over to Vancouver Island and made a point to use my free rafting trip before it expired.

Lunch was included on our rafting trip, and… I mean… they’re packing a lunch for all these people for an adventurous day on a river. I knew it was obviously going to be sandwiches.

That’s okay. I don’t eat gluten, and definitely try not to eat anything processed like weird lunch meats, but I have been eating incredibly well lately, and … hey… it’s one lunch. So it didn’t bother me that much, and besides – I really didn’t want to be the one making a fuss and asking them to change their menu just for me.

Number one thing I need to work on: Self Control.

Okay, so I ate my sandwich with my bread, and my lunch meat, and my giant dollop of processed mayonnaise and mustard. And I liked it. I am a strong believer that if you eat poorly once in a while, and in moderation, it probably isn’t going to do anything to you.

But instead of doing that and feeling good about having my one “bad” meal, my brain went “Well, you already ate some bad stuff. May as well just keep going”. So I ate a bunch of veggies dipped in gross, processed oil infested Kraft salad dressing. Then Jesse pointed out how amazing the sugary granola bars were, so I had one. And then I had another. And then…. well I had that many…. so what’s one more gonna do? So I had another. Then after we were done rafting, we were all shivering, so they offered us some processed packet hot chocolate for our bus ride back to town. I didn’t have to have it, but …. I did anyway.

After rafting, we raced to catch the last ferry home and missed it by one second. We pulled up just as it was untying from the dock. Stuck on Vancouver Island, we all went out for dinner to a Mexican restaurant. Not that Mexican food is ridiculously healthy or anything, but I could have at least had a corn tortilla instead of a fluffy, white, flour tortilla. But I wanted a burrito, and I had already had gluten that day, sooo…..what’s some more gluten gonna do?

Then because Luke and I had to work the next day at 8:30 am, we camped in the woods next to the ferry terminal and caught the first boat back home before a race to get there on time. I’m not one for a long day of work with no breakfast, so we decided to order the on-boat cafeteria plate of greasy breakfast food. This wasn’t classy breakfast, it was like… nasty sausages, a pile of unappetizing scrambled eggs, and fried hash brown patties. You know… like… Denny’s style.

Then because I obviously couldn’t pack a lunch that morning, I had to pop over to the bakery midday to grab me some grub. I drew the line with myself by ordering some gluten free chili polenta – maybe not what I would normally eat because it had lots of cheese on it, but I had to stop myself from continuing my free for all with some pizza – I guess it seemed pretty good by comparison.

I’m giving myself an inch and my brain is trying to quickly eat up several kilometres!

Why? Is it because I secretly despise having to look after all the details of my health all of the time? That I’m jealous of those that can just eat whatever they want whenever they want, and not care? Is it just because I’m sick of cooking the same things (even though they’re delicious) and I just crave some variety?

Anyway. I didn’t feel very good about this whole thing as the day went on. It’s not even the fact that I ate bad food….I don’t even care. I enjoyed that part. I mean.. heck…it tasted good, and it was fun to just throw my self control out the door and have fun with my friends for ONE day. I knew I’d be returning home soon and I knew for sure that I will just get right back into healthy eating, so whatever.

That’s what my rational mind said. But because I wrote that article the other day about hypnotism and using hypnotherapy to release ingrained reactions to our acne, it made me really think about what sort of fearful reactions I still have ingrained in my own head.

I know that one is my fearful reaction to eating unhealthy food.

It seems my mind is still trained to fear that it will directly cause acne, even though I have no evidence that it will necessarily translate into that. This reaction has become much less pronounced – I remember how utterly terrified I used to be when I first started improving my diet to treat my acne. Now one or two unhealthy meals honestly doesn’t bother me anymore, but I can tell that an uncontrolled binge still sets those fireworks of fear off in my head. They are more like wimpy firecrackers now than huge cascading light shows…. but they still seem to be stuck there due to habit.

Second is my reaction to the fear, and one habit of mine that still seems to crop up when I get nervous about my skin is my tendency to touch my chin.

I realized that since I haven’t been worried about acne much lately, I subsequently haven’t been doing this either…. but here I was, doing it again. My hand mindlessly begins searching for spots that are coming up. This is obviously a habitual, nervous reaction, because even though my mind KNOWS that if this unhealthy binge was going to give me zits, they wouldn’t come up right away. Yet, my hand begins it’s search right away.

Anyway… I just wanted to share that with you. I’d really like to get to the point where I can disassociate unhealthy eating with my fear of acne. I know that most of my motivation to eat healthy now stems from other things – a general respect for taking care of the body so that it can serve me well in the future. But that residual fear of acne is still clinging a little bit and I don’t like it. And like I said, my article about hypnotherapy really reminded me that I’m not emotionally unbound just quite yet.

Hopefully one day I will be though. It’s all a beautiful process, right? 🙂