Are B Vitamin Supplements Causing Your Acne? 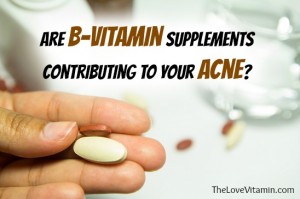 This is a guest post by reader Nicole Schnackenberg, who is sharing her cautionary tale about B Vitamins.

I had the nagging feeling so many years that I was somehow, albeit subconsciously, making my skin problems worse. Indeed, my skin cleared up considerably when I stopped picking at it, stripping it with chemicals and covering it with thick layers of concealer.

Yet it would still flare up and I couldn’t get completely clear, no matter how hard I tried. I became obsessed with my diet, obsessed with environmental toxins, obsessed with everything. I figured that something must be causing the breakouts to continue and almost drove myself crazy trying to figure out just what it was.

I really tried everything and considered everything as a potential trigger. Or so I thought. One night I couldn’t sleep, walking backwards and forwards from my bed to the bathroom mirror, shedding copious tears over the reflection I saw there.

I sat on the sofa and allowed myself to have a good old cry. Perhaps I just had to accept it? Perhaps this is just how it was always going to be. I am not my appearance I tried to remind myself, sitting on my own hands to stop them from wandering up to my face.

What I Learned About B Vitamin Supplements

Then my mind seemed to take me back to when it all began. It was around four years previous. I had become a vegan. I had started to take B vitamins in an attempt to make up for the nutritional deficiencies in my diet, having read that B12 could only be obtained from animal products.

I began to wonder. Could the vitamins have something to do with it? I had never even considered this before. They were just a few tiny pills I took every day that were surely doing me nothing but good. Yet, my skin problems really did seem to develop around the time I started taking these vitamins. I switched on my computer and began to Google around.

Sure enough, I found numerous studies confirming that vitamin supplements, particularly B12 and B6 can induce and/or worsen acne in some people. Cases of rosacea and acne forming eruptions have been reported (e.g. here, here, and here) and there are many personal stories online of people who have experienced acne breakouts due to Vitamin B supplementation. I opened my kitchen cupboard and looked at the supplement I had been taking.

I was shocked to see that it provided over 4,000 percent of the Recommended Daily Allowance of B12 and B6 in each tablet, with the guidelines advocating taking up to five tablets a day! I had thankfully only been taking one or two a day, and have since come across stories on the web of people breaking out at much lower doses.

Why B Vitamins Could Contribute to Acne

The reason such high levels are ‘allowed’ is because B vitamins are water soluble, with excess reportedly being excreted in the urine. This would explain the dark yellow urine many of us experience when taking these supplements.

Further research, however, led me to understand that most B12 supplements are made from cyanocobalamin (as indeed mine were), which is a cheap, synthetic chemical containing cyanide molecules.

Yes – cyanide! These poisonous cyanide molecules must be removed from the body by the liver. One of the liver’s pathways of removal, as many of us are all too aware, is through the skin. Furthermore, the liver can store several years’ worth of B12, making toxicity more possible than the ‘water-soluble’ party-line would have us believe.

This then brings us to B6. The reason it was so detrimental to me, I believe, is because it is known to reduce estrogen levels and increase progesterone. My estrogen levels had been low for some time, and I had long wondered why. Low estrogen levels are often coupled with higher relative testosterone levels, which can mean higher levels of sebum production.

I sat on the sofa that night and wiped my tears decidedly away. I would stop taking my supplements. I would take a tincture of saw palmetto to help balance my hormone levels and a tincture of milk thistle to support my toxic liver and nothing more.

I would drink plenty of water and eat lots of fresh veggies. And I would be patient. My hormones were not going to fix themselves overnight.

What Happened When I Stopped Taking the B Vitamins

Patience when trying a new approach with your acne can be the hardest thing in the world. There is so much anxiety over whether it is working and how long you should continue, especially if things initially get worse before they get better (as they are sometimes want to do).

I definitely experienced a bit of healing crisis – lots of eruptions around my chin and jaw line that took weeks to subside. I nearly gave up and went back to my vitamins. Yet I am so grateful I stuck it out.

After about eight weeks my skin took a turn for the better. Fewer and fewer blemishes emerged and those that did were less inflamed and disappeared more quickly. I was also sleeping better and after twelve weeks my menstrual cycle had settled at 28 days, with fewer PMS symptoms and less discomfort.

A strange pain I had been experiencing in my jaw also disappeared, which I now think could have been nerve damage, a known side-effect of excessive B6 supplementation.

It is now four months since I stopped taking my B vitamin supplements and my skin is about 90% clear. I continue to only wash my face with water and avoid occlusive cosmetics, eat mostly a whole foods diet and take the milk thistle and saw palmetto which all help….but the B vitamins seem to have been a significant part of the puzzle. I am delighted beyond belief!

Our Bodies Are Actually Wonderfully Clever

I appreciate that acne has a vast and dizzying array of causes and triggers for different people and that vitamin supplementation may be beneficial for lots of you out there. I just wanted to share my story and to implore you at least to consider whether the supplements you are taking could be doing you more harm than good.

Perhaps get your hormone levels tested (so you know what you are dealing with instead of blindly ‘shooting in the dark’), stick to good quality supplements (preferably in tincture form, since they are free of the nasty chemical fillers used in so many tablets) and try to meet your body’s nutritional needs from good old fashioned food.

B vitamins, for example, abound in many foods, including animal products, pulses, potatoes and grains. Deficiencies are actually quite rare. B12 is the only vitamin that must be obtained from animal products and I have now accordingly added eggs and even the occasional piece of fish to my previously-vegan repertoire.

The simplest explanations are often the best explanations. Our bodies were not made for an assault of chemicals and have wonderfully clever and natural mechanisms for maintaining balance. My supplements were throwing off the balance, which is now gradually and gratefully returning.

Nicole Schnackenberg is a teacher and psychotherapist, currently working towards her doctorate in health psychology.

PS from Tracy – B Vitamins can be incredibly helpful for reducing stress, balancing hormones, and helping your liver detoxify (and we even had a guest post not that long ago from someone whose acne cleared up after getting B12 injections… just to make this really confusing!)

All in all, it’s important to choose a really good quality B Complex to avoid the problems Nicole ran into. The only one that I have found of good quality that I can recommend, that doesn’t contain excessive amounts of B12 is Thorne Stress B Complex