Does Sweat Cause or Irritate Acne? 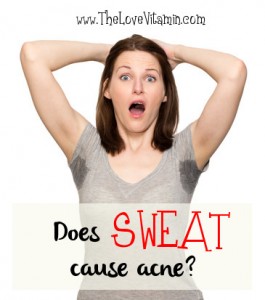 The conventional wisdom says “Don’t leave sweat on your skin.” “Sweat is bad for acne”. “Get it off your face as soon as you start to look even a little bit hot.”

This is a topic I simply must address as I’ve been asked this about a thousand times now in the comments of that article, and it kind of makes me laugh a little how upset people get about it just on principle.

To be honest, I don’t have a really great answer for you. Not washing my face as a way to clear acne was simply an experiment that happened to work pretty well for me and lots of others who have tried it afterwards, but I can’t know how it’s going to work for every single person who tries it. There’s no real rules.

All that I know is that conventional wisdom says don’t do it. Don’t leave that sweat on or you’ll regret it!!

So why is it so hard to extend that a little further and suspend disbelief that maybe it’s not such a big deal to leave a little sweat on your face?

Personally for me, I have absolutely no problem letting sweat dry on my skin, or if I was really sweating a lot, simply patting it off with a towel. No problem at all. It doesn’t gross me out, it doesn’t irritate my skin, and it’s, like, way more convenient not to care.

That’s just me though. I realize that my experience does not extend to every human ever. Maybe your sweat really does irritate your acne. But do you know that it does, or are you just afraid of it because that’s what you’ve been told over and over?

After all, I like to think our bodies know what to do better than a sweat-shaming beauty industry who want to sell you face wash.

Now, I don’t know the science behind sweat, but I have read that it contains a natural antibiotic, dermcidin, which means sweating may actually be good for treating acne! Maybe that’s actually why the caveman regimen works for many people!

I also have the feeling though that if you eat a really, really poor diet and your body is very toxic, that those toxins may come out in your sweat and irritate your skin. Maybe this is why the caveman regimen doesn’t work for everyone.

So as with over all holistic approach to acne, I do recommend, of course, eating good food and taking care of yourself so that sweat doesn’t have to cause you any issue, and may even work in your favour.

All in all, I think this is a definite case by case situation, and there aren’t any real answers except see for yourself! I don’t think a little sweat on your face has to be such a gross and horrible thing in all cases.

Watch Me Talk About Sweat and Acne in Video:

What do you think about sweat, sweating, and acne? What are your sweaty experiences with sweat and acne?