Emotions and Acne – The Mystery Solved? 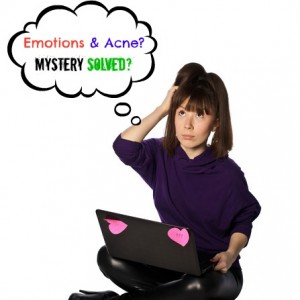 This is a guest post from Luke at TapAwayAcne.com

There’s been a lot of talk about stress and acne lately. I’d like to demystify the topic, in order to bring it under people’s control. I want to show a little bit about how this connection works, and how it can be used in a very tangible way for healing.

The word ‘stress’ is so vague it almost has no meaning. To people who are stressed out, knowing you’re stressed doesn’t really help, except that now you can be stressed about being stressed. I’d like to break it down and see what’s really behind it (and I promise that I won’t say stress that many times in one sentence again).

Let me to introduce myself. I enjoy fencing, martial arts, and hiking. I’m good with computers, and I’ve lived overseas.

I had moderate to severe acne for five years. I found that I could get my acne under control by using topical regimens and creams, but it never offered real freedom from acne, and it required strict adherence in order to work.

Stopping the regimen meant acne would always come back. I showed no signs of growing out of my acne either, as I progressed into adulthood. In addition, I suffered from depression and PTSD, and couldn’t stand up for myself.

I no longer have acne, and haven’t had a breakout in over six months. I wash my face once a day, and use moisturizer after I shower, which is all I’ve put on my face for a year and a half. My depression has lifted, and my PTSD symptoms are negligible.

When we feel threatened, our bodies go into fight or flight mode, where a primitive part of our brain is literally bracing to save our lives. When this happens, parts of our bodies physically start to shut down and go into survival mode – including our skin.

As far as the subconscious is concerned, there are more important and urgent things to put energy into, like getting us ready to fight or run for our lives. When this is the case, our skin is no longer regulated in a normal, healthy manner. Thus an overproduction of sebum, a weakness to bacteria and infection, and all the things which compromise the skin organ enough for acne to appear.

This is what stress is: our body believes it’s under attack, and so must prepare to defend itself. It’s like going onto a wartime footing, and every resource must be rationed. As far as our body is concerned, skin health is low on the list of priorities.

To be sure, stress manifests itself in many different ways, not just poor skin health. But for one segment of the population (namely us), acne is one of the major ways it shows up.

When I first began to understand that stress was created when I felt threatened, it changed how I saw my acne. Instead of fearfully (and depressingly) scrutinizing my eating habits, or worrying that a particular skin cream was causing a breakout, I started looking at my emotional life.

I began to see that I felt threatened in most areas of my life, and that this constant perception of danger was forcing my body to always be ready to defend itself. To be sure, much of this was happening in my subconscious, but this constant fear of attack was filtering up into my conscious mind as depression and anxiety.

What Causes These Feelings of Danger?

So what was causing me to feel so threatened all the time? In short, my past. I had experienced a lot of trauma as a kid, thanks to very strict discipline and family beliefs.

I had learned the hard way that many actions were not allowed, and would get me punished. Things like showing anger, standing up for myself, talking back, and interaction with friends had all be strictly controlled as a child. As a result, I had learned that many things were unsafe, and throughout my teenage years, these beliefs had stayed with me.

As an adult, this showed up in many ways: I was uncomfortable around people, I couldn’t face any kind of authority figure, I was easily pushed around, and I carried a tremendous burden of guilt. I favored isolation, because only when I was alone did I really feel comfortable or safe.

Whenever we experience traumatic events (both big ‘T’ and little ‘t’ traumas) which feel threatening, it’s like our bodies take a recording of that event, and file it away in a vault. However, instead of having one secret code that we hide and forget about, these vaults can be opened by any number of codes, like sights, sounds, smells or feelings which remind us of the event.

When this happens (usually subconsciously), our bodies automatically re-open the vault and activates the painful memory on cue, in order to prevent us from getting hurt the same way again. It’s a protection mechanism meant to keep us alive.

In my case, there were hundreds of triggers that constantly reminded my subconscious of danger. Anything from the look on someone’s face to a random person shouting in the parking lot could trigger subconscious danger responses. My body reflected this chaotic and unpredictable emotional landscape.

As a child I had learned that a lot of things were unsafe. Yet as an adult, almost all these lessons were obsolete. I was big enough, strong enough and smart enough to take care of myself. I no longer needed to rely on caregivers to have my needs met, like I did as a child. This old programming was getting in the way by sending me danger signals where no danger existed anymore.

Freedom came when I started using EFT (Emotional Freedom Technique) on these old memories of discipline and punishment. Once I started clearing them, I stopped responding to the triggers which use to make me feel unsafe. And when I stopped feeling unsafe, my body responded by healing rapidly on it’s own.

None of this healing would have been possible if I hadn’t been introduced to EFT. This simple technique was the driving force behind all my emotional healing.

It worked so thoroughly and effectively, that once I had used it on a painful memory, I rarely had to revisit it again. It moved my past experiences out of the ‘life threatening’ category, and turned them into ordinary memories. After just a few minutes of tapping, all that bottled up emotional pain would simply melt away.

Even after all this time, it still amazes me how fast things shift. The kind of emotional healing that could have taken years to accomplish, was happening before my eyes. I could actually see my responses and reactions to things change from day to day.

Many of the things which use to define me – being a loner, being a survivor, never trusting other people – lost their importance. I stopped needing to identify myself by the traumatic things that happened to me. As the pain was dealt with, there was room for the kind of life I had always wanted to live. The healing process was gradual, but the results have been worth every ounce of effort I put in.

What I love about this topic is that acne has lost it’s mystery. I use to be under tremendous pressure to isolate that ONE random thing in my diet or regimen which was causing me to breakout. That pressure is gone now, except as a positive force that inspires me.

I wanted to shed light on how our emotions also affect our acne, and the kind of improvements that are possible when we give 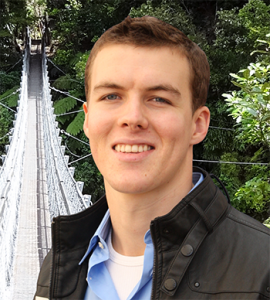 our emotional health the same kind of attention and effort we give to our physical selves.

We are holistic people.

Luke runs an EFT Practice at TapAwayAcne.com, dedicated to helping people uncover the emotional causes of their acne.