What is Oil Pulling, and Could It Clear Your Skin? 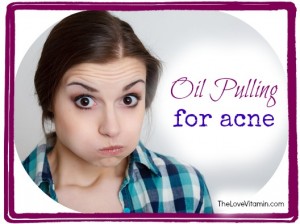 By popular demand, it is here! The acne and oil pulling article.

So, first of all.. what the heck is oil pulling?

Well, it’s a popular health practice that has roots in the ancient Ayurvedic medicine system of India.

You swish some oil (usually unrefined sesame or virgin coconut oil) in your mouth for 20 minutes or so and then spit it out and brush your teeth.

What is supposed to happen is that the physical properties of the oil draws out the bacteria in your mouth, and you dispose of it in the sink, resulting in much better oral health (whiter teeth, better breath, lower tooth sensitivity, less plaque etc)… but they also say it can have a profound effect on the wellness of your whole body.

Yes, it’s another one of those things that the internet says will cure anything this side of the moon, including acne.

How Does Oil Pulling Clear Acne?

How in the hell is that supposed to clear your skin, you ask?

Well you’re right to ask that. It sounds downright stupid, and even though I’ve tried oil pulling in the past, right up until I wrote this article I still didn’t full understand how swishing something around in your mouth could possibly clear your skin. I could see how it could result in better oral health, but beyond that …??

Yet, I’ve actually gotten many emails over the years from people saying that they swear oil pulling is having a hugely positive effect on their health and that it’s made a massive difference to their skin.

Well Katie from KitchenStewardship.com laid out one of the best explanations that I’ve seen yet, and one that I could get on board with.

Acne can often be tied to gut issues. Gut issues are usually caused by an imbalance in the bacteria in the gut. We have trillions of bacteria in our body and guts, some of which are good, some of which are bad, and we have to keep a positive balance to stay healthy. This bacterial tango does in fact have a HUGE effect on your overall health and skin.

So what comes before the gut? The mouth. So theoretically, oil pulling could pull much of the bad bacteria from your mouth, preventing it from migrating to your gut, and resulting in a happier, healthier you.

How Do You Do Oil Pulling for Acne?

What Was My Personal Experience with Oil Pulling?

I’ve personally tried oil pulling twice. Once when I was trying to get rid of my severe acne, and once a couple years later after getting one of those emails from a reader saying how much it had helped her skin.

Well I hate to say, but both times I did it for about two weeks and gave up. Not everyone thinks this, but I just thought it was a bit of a pain in the butt. Plus, the first time I tried it, it was when I was in the midst of trying EVERYTHING imaginable to clear my skin, and I got really overwhelmed with all the little “health tricks” out there to try… I had to let something go, and that was the oil pulling.

Both times I didn’t notice any difference in the short time I tried it, but it’s not to say it won’t work for you, or that you will think it’s annoying like I did. Everyone is different.

So hey, if you’re interested, give it a go. There’s not much risk and at the very least it will make your teeth whiter and breath fresher.

I heard of oil pulling recently from my employee. It’s a great cure for acne and all skin disorders especially when you try it with sesame oil. After a month of oil pulling, all my acne started to vanish although I have to admit that I still have its leftover marks. I am confident that even marks will disappear in coming days. -Karth

Anything Else You Should Know?

YES! You should be warned that from what I’ve heard, oil pulling can result in a pretty strong detox reaction at first.

This means that things will get worse before they get better… aka. you may not feel good overall and have worse breakouts for a couple weeks before things start improving. For more about detox reactions and “healing crisises”, read this article.

I also wanted to let you know this oil pulling technique is pretty amazing!!! I stuck with it through the intense detox period, and will continue to… my skins never looked and more importantly, felt so good.  Im still breaking out a bit here and there, but each one is less intense than the last , which i am absolutely convinced is part of the healing process.  The skin that is not broken out is clear soft and glowing!!  Just wanted to share that with you 🙂 – Allison

Also if the explanation as to why oil pulling works is true (ie. it stops a lot of the bad bacteria from reaching your gut), you may want to pair the practice with taking a good probiotic supplement to give your gut an even bigger boost.

Have you tried oil pulling? What has your experience been?