Tracy Dumps the Ice Water On Her Head for ALS 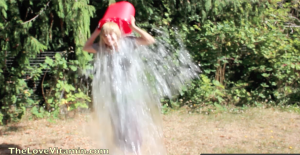 Hey guys, so I’ve been nominated by my friend Kevan to do this ice bucket challenge thing! So I’m doing it!

Although some people are hating on the challenge because it’s “faddy” now…. but I don’t see how you can hate on something that brings awareness, gets people thinking of others, and donating to charity! Even if it’s annoying, it works.

And if you be bitchin’, just watch this and you’ll probably change your tune:

And if you haven’t heard of this Ice Bucket Challenge stuff at all yet you must be living under a rock (which is totally okay). The point of the ice bucket challenge is to bring awareness to ALS (also known as Lou Gehrig’s disease or MND) – a fatal, degenerative, neuromuscular disease in which nerve cells die and lead to near paralyzation of the body. You get 2 to 5 years to live, and end up not being able to walk, talk, or do anything. Scary stuff.

So… basically, you either donate, or you dump a bucket of ice water on your head to raise awareness (or both), and then you get to nominate three other people to do it!

Since ALS has already raised nearly 100 million dollars in this campaign, I decided to go on a charity spree and instead donate to several other charities from which the causes are meaningful to Luke and I:

I now nominate all of you! Dump some ice water on your head if you want, or donate a bit to ALS or a charity of your choosing. Do as much as you can, even if it’s just five or ten bucks!

If you don’t know of a charity that means anything to you, you can always donate to my Obstetric Fistula campaign…. us Love Vitamins raised $1300 last year …. that’s two and a half new vaginas!! haha. Go us 🙂

Alright alright, enough talking, here’s the video. I also dumped a little ice water on Sharkie and Huck since I’m donating to the doggy charity. They hate me.

(Also, sorry, the video turned out a little blurry, but this just wasn’t something I was willing to do twice! Make sure to watch it in HD for best quality)