How to Treat Acne Caused by High Androgens 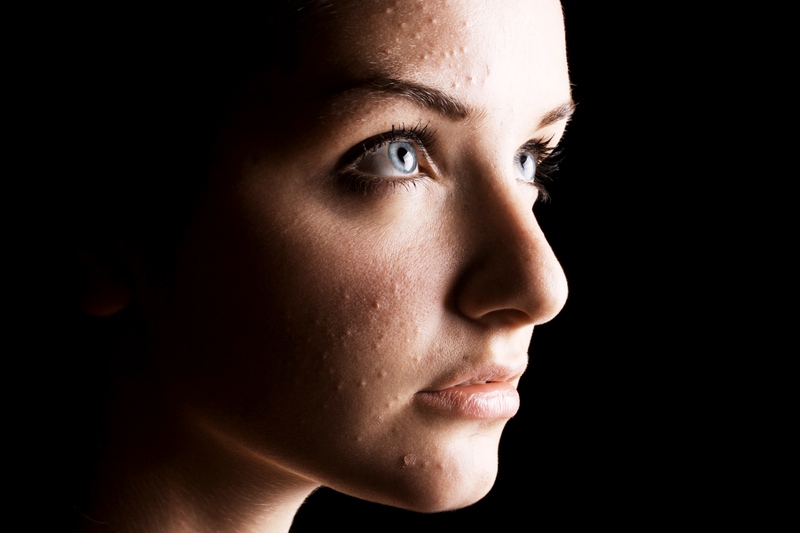 As an adult woman, you probably know that hormones have a lot to do with your acne!

After all, the relentless onslaught of acne at certain times of month seem to have a mind of their own, and it doesn’t matter what you do to the outside of your face… it just won’t budge!

Now there are a lot of different hormonal balances you can have (check out my Hormonal Acne Guide for more info) and it seems that nearly all of them seem to lead to acne for some people.

However, the end result of all of these imbalances is that it leads to your body converting androgens (male hormones) into an extra potent form of testosterone called DHT.

DHT is the hormone at the end of the line that directly causes you to break out.

Now, if the underlying issue is that your body has elevated level of androgens (ex. testosterone, or adrenostenedione), then the problem is that there’s simply a larger pool of androgens to potentially convert to DHT.

Lowering your androgen production, or at least limiting the DHT conversion, should therefore help you to stop breaking out.

How Do I Know if My Acne is Caused by High Androgens?

Here are some possible clues:

And here’s what’s been most effective for the women in my Naturally Clear Skin Academy who have higher androgen levels:

This is probably the most important thing when it comes to controlling androgen levels, as insulin swings directly release androgens.

Eat a healthy, natural, low glycemic diet and make sure you are eating three squares and a few snacks in there. Keep snacks with you so that if you feel your blood sugar dipping, you can prevent a crash.

Also hugely important to keeping blood sugar levels on track is limiting caffeine, and getting regular exercise (not just cardio… get three or four moderate intensity strength training seshes in there per week).

Avoid Dairy As Much as Possible

IGF-1 is a growth hormone that, similar to insulin, stimulates your body to produce androgens. It also contributes to your skin’s oil production, and encourages your body’s androgens to convert to DHT.

Some people don’t have as much trouble with small amounts of organic dairy like yogurt, but you’ll certainly never catch me just drinking a big glass of straight up milk again.

Saw palmetto is a natural plant derived supplement that blocks the conversion of androgens to DHT. Some people consider it like a gentle, natural version of the acne drug Spironolactone.

DHT Block is a supplement by the people who make my fave supplement Estroblock… allegedly it’s like saw palmetto, but more effective. I can’t vouch for this as I haven’t tried it myself, but many of my Academy gals have had success with it.

If you’re a dude, be careful about saw palmetto… it can have negative side effects like loss of the ol’ sex drive. But apparently for women, side effects are not that common. Although be cautious about using it if you’re on birth control or pregnant.

Spearmint tea has been shown in studies to lower androgen levels and apparently helps with androgen related acne… but you’ll have to commit to two or three cups a day!

Is your acne caused by high androgens? What have been the most effective strategies for you?