Update on my MMS Experiment 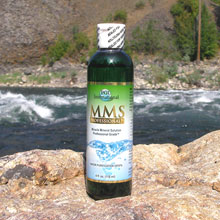 So I’ve been getting a few requests lately to hear about how my experience with MMS (Miracle Mineral Solution) went. If you don’t know what MMS is, read my articles about it here and here.

Well…. all in all, I’d say the first experiment with MMS, for me, wasn’t very successful.

MMS is supposedly a ridiculously powerful detoxifier. So my theory was that if you could detox your body quickly with it, it would help to prevent toxins from coming out through your skin.

It can also kill parasites and other buggers that may be messing with your digestion, so it could help in that way too.

I used it very consistently for a few weeks… 3 or 4. Maybe 5. Sorry, I should have paid better attention! I got up to somewhere around 9 or 10 drops twice a day.

The only consistent thing I noticed throughout the whole experiment was that I was really cranky all the time and kinda lethargic. And when I got up into the higher doses – 9 and 10 drops, it started hurting my stomach a bit and I lost my appetite. I never got classicly nauseous though.

Since my stomach was feeling yucky, I cut back down to 6 drops twice a day for a few days and then decided to quit.

I felt a lot better after I stopped.

The thing is – this is what’s supposed to happen – feeling bad signifies that you actually are detoxing. The toxins die and your body needs to process them. If they die too quickly for your body to handle, then they will make you feel bad.

I realized that it might be a good idea to take a liver detoxifying supplement or something before and while you take MMS to help this process along. If your detoxifying channels are backed up – ie your liver is overloaded and your bowels aren’t working properly, then your detox symptoms will be magnified.

Maybe that was what was happening with me. Maybe if I had kept going, I would have pushed past it and started to feel amazing. I have no idea.

The thing is, I’ve been reading that the protocol I was using – the two big doses twice a day – is actually an old recommendation. They now recommend that you take a very small dose – 2 or 3 drops – every hour, 8 hours a day, for 3 weeks.

I know – when I first read that, I was like…. yeah. Not gonna happen.

But allegedly you can mix it every morning in one big batch and then drink the allotted portion every hour, instead of mixing it 8 times a day. That doesn’t sound so bad.

Anyway, this new recommendation is apparently a lot more gentle on your body. The constant doses ensure that detoxification is happening consistently (instead of just in one or two MEGA hits, which can obviously be tough on the body) and the low dose ensures that your body is able to process the dead toxins without getting overwhelmed.

So, I was going to try out this new protocol first before I wrote my follow up article on MMS, but since people were asking, I figured I may as well give you the update.

It’s a good thing too, since I don’t have a clue when I’m going to work my way up to trying it again. The first experiment wasn’t terrible, but it wasn’t all that fun (especially because MMS tastes retched). I’m not at all stoked to try it again, but if this protocol is gentler, than maybe it won’t be so bad.

Oh, I’d also like to say that I tried using the MMS externally on my skin too… I only used it for about a week, but I found it to be a bit drying. And it smelled gross. And it was annoying mixing it every other day. So, yeah… that was also abandoned quickly!

In conclusion: The verdict is still out on MMS for me. It didn’t make a lick of difference to my skin, but I haven’t really read much about it helping with acne specifically, so it was really only an experimental hope.

It’s not to say MMS doesn’t work for anything though. It’s primary function, so they say, seems to be killing parasites and viruses and whatever else, and I’ve had people post on the last articles about MMS saying that it stamps out colds for them in a second.

Have you used MMS before? Any luck?